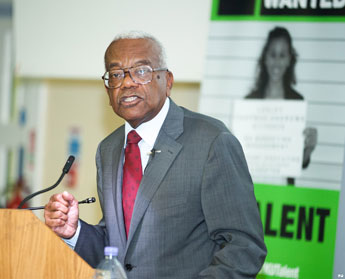 Broadcasting legend Sir Trevor McDonald has given Kingston University students an exclusive insight into the lives of some of the most significant figures in modern history.

Speaking to a packed house in the Jacqueline Wilson Hall at the Penrhyn Road campus, 74-year-old Sir Trevor - one of Britain's most celebrated journalists - recounted experiences from a career spanning more than four decades. He also disclosed details of his personal encounters with a succession of world leaders, ranging from Nelson Mandela to Saddam Hussein.

The lecture, organised by the University's KU Talent team, was Sir Trevor's second at the university in as many years. Having started his career in radio in Trinidad, Sir Trevor went on to become one of the most decorated and trusted British broadcasters of all time, present at many of the most pivotal moments in history, knighted for his services to broadcasting and recently named the nation's favourite newsreader in a poll to mark 90 years of the Radio Times.

In a talk followed by a question and answer session, Sir Trevor who fronted ITN's flagship News at Ten bulletins for many years, mixed anecdotes about experiences such as sharing whiskey with Iraqi secret police with tales of his own rise to the top of the broadcasting world and tips on how students might follow in his footsteps.

He began the evening by stressing the importance of personal interaction so students got a better understanding of the world around them. "Embrace as much as you can, travel and get out there - nothing will substitute for being there," he urged the audience. Sir Trevor was also keen to emphasise the role of hard work. "Nothing is accomplished without dedication and effort - please ignore anyone who says anything to the contrary," he said. "In an increasingly complex world, it's one thing that no-one can take away from you."

Sir Trevor's remarkable career has taken him to some of the world's most dangerous places and into the company of some of its most powerful people. From his encounters with George W Bush - "I hated most things that he did, but you could not find a more charming man" - to Saddam Hussein - "He was immaculately dressed in an Armani suit and insisted on showing me round his palace and chatting long after the interview was finished" - the audience was treated to a fascinating insight into a life which has made Sir Trevor a household name to two generations of British television viewers. 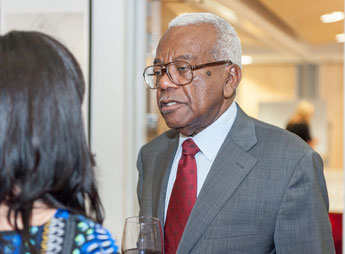 As well as regaling students with stories from his own career, he also answered a selection of their questions, revealing more about the attitudes and experiences that helped him reach the height of his profession.

When asked how an increasingly beleaguered media industry could do something to inspire young people, he stressed the importance of professionalism. "It seems to transcend so much," he said. "People may not agree with you but, if they see you give your best, without even thinking of it you make a positive impact."

Sir Trevor cited covering Barack Obama's US election victory in 2008 as one of the most significant events of his career, but said no-one had left as much of an impact on him as Nelson Mandela. He revealed how, despite having spent 26 years incarcerated on Robben Island, in all their encounters the former South African president had only once hinted at ill-treatment at the hands of the former regime.

Striking the same unruffled, dignified persona he has always displayed to his television audiences, Sir Trevor's speech at Kingston revealed the passion for his work that propelled him to the top of his profession. "Don't let people find their limits on your ambition, you find your own," was one of his most telling remarks. "If you don't want to do something, fine, let it be your decision - but don't be told by others standing on the sidelines.

"The ones you must never trust are those who say you can't do it," he added. "You show them by your hard work that yes, you can. Go out there and wow them."

University talent development and employability manager Tonia Galati said keynote speakers such as Sir Trevor and Channel 4 newsreader Krishnan Guru-Murthy, who is due to visit the University later in October, were extremely influential role models for Kingston students. "We are committed to bringing inspirational people like Sir Trevor on to campus to talk to students about how they have achieved their success and the barriers and challenges they have had to overcome along the way," she added."It's incredible to witness the impact of this work in raising students' aspirations and motivating them to achieve anything they set their minds to."