Work by Kingston University students was displayed in China alongside exhibits from 15 other London universities as part of an initiative supported by the Mayor of London's office to demonstrate the benefits of studying in the UK capital. 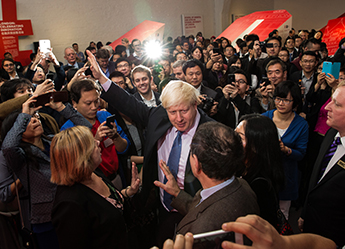 On 13 October, Kingston's Vice-Chancellor Julius Weinberg and Heather Forland, director of Kingston International, joined London Mayor Boris Johnson, minister of Universities and Science David Willlets and other representatives from London universities in the Yang Gallery in the heart of Beijing's art district. The occasion was the launch of the first official Chinese language website promoting London and the opening of a spectacular four-day pop-up installation 'London: celebrating innovation' arranged by the 16 universities that form London Universities International Partnership (LUIP).

Created especially for Beijing, the giant letters which dominate the gallery spell out the word LONDON. Each letter highlights a unique contribution that London's universities are making to global research, creativity and learning. 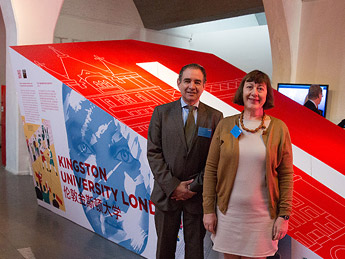 Kingston University had a strong presence at the event, which was part of the mayor's six-day trade mission to China. Julius Weinberg launched the proceedings by welcoming 300 officials and delegates and Heather Forland, who is also the chair of the China group of LUIP, gave a speech about the benefits of studying in London and exciting collaborations between London and Chinese universities.

The pop-up installation reflects the breadth and depth of the 30,000 courses and subjects available to study at London universities. Kingston provided a series of images from the Illustration and Animation graduating class of 2013. St Georges, University of London is exhibiting its work in finding a cure for rabies using tobacco plants.

Boris Johnson demonstrated www.london.cn to the audience, alongside prime-time Chinese TV celebrity Meng Fei. Student services on the site include application advice tailored to Chinese candidates and full profiles of every university in London.

Mr Johnson said: "My mission on this visit is to strengthen the already impressive cultural, educational and business ties between China and London. We are already welcoming increasing numbers of Chinese tourists and students to the capital but we want to do all we can to ensure London is the first choice over competing global rivals. This welcoming new Chinese language website, providing a definitive guide to London's attractions, is one way we are making it easier for potential visitors." 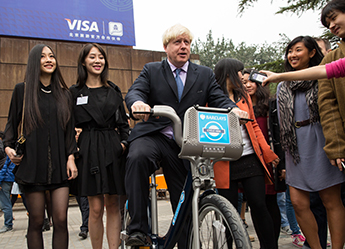 The number of Chinese people studying in London is rising, with a record 15,000 last year, making China London's number one market for international students. Traditionally, a high percentage of the 15,000 Chinese students studying in London opt for a Business Studies degree, but the trend is changing. For example the number of Chinese students studying Creative Art and Design rose by 35% in 2012.

Meng Fei talked about the three things he likes best about London and accepted an invitation from Boris to film an episode of his hit TV show in London. Meng Fei has a huge following on Weibo - China's equivalent to Twitter - and Kingston University's Weibo account is the fourth largest of any UK university in China, with more than 25,000 followers.