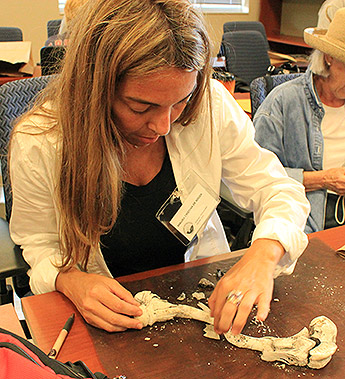 While some students spend their summer break having a holiday or picking up part-time work, Maura Struppl, a final year Forensic Science and Investigative Analysis BSc(Hons) student, chose to spend more than a month in Tennessee at a body farm examining human remains.

Maura applied for a coveted place at the Forensic Anthropology Centre in Knoxville and was accepted on to three different courses - field methods, human identification and forensic taphonomy.

"The centre is a world leader in its field," Maura said. "It was established in 1981 by Dr William Bass, who is very well respected and runs courses for outside students once a year with only around five students per course. Candidates all over the world apply for these few spaces.The centre trains law enforcement officers, FBI agents and coroners in scene-of-crime skills and techniques."

The centre has an outdoor facility where donated bodies are buried or left in conditions that may represent a crime scene. It also houses the Bass Collection, the donated skeletal remains of around 1,000 individuals that are curated with every injury and illness catalogued.

"The courses the centre runs were different to anything I have done before. There is only so much a university in London can do with specimens, but out there we are able to handle bones, examine and compare them from a vast selection. It was 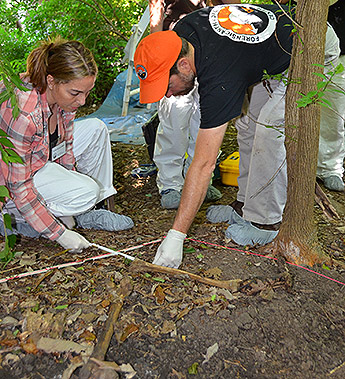 invaluable for learning to determine the difference of fragmented bones, often very small, between human and animal bones.

"We also learnt how to approach and handle a crime scene as well as how to treat a site, for example as mass-grave or as an archaeological site."

Maura worked as a criminal lawyer in her native Brazil, then as a revenue analyst for the Hilton Hotel for many years in the UK. After leaving hospitality, she decided to return to study in a field that would allow her back into an aspect of criminal law. But how can someone go from those environments to a body farm?

"I had read and prepared a lot before I went so I wasn't too daunted seeing skeletal remains and bodies," Maura explained. "It's actually easier for me than, say, being a paramedic as they work under pressure to save people's lives. In a real crime scene scenario, when someone is already dead, all you can think of is that you are there for the victim and that you have a very important job to do in finding out the circumstances of the person's death. In the case of the body farm, you are there for research and you have an utmost respect for that person for donating their body to science."

Maura is using her work at the body farm for her dissertation in which she hopes to develop methods for better determining the sex of children's skeletal remains.