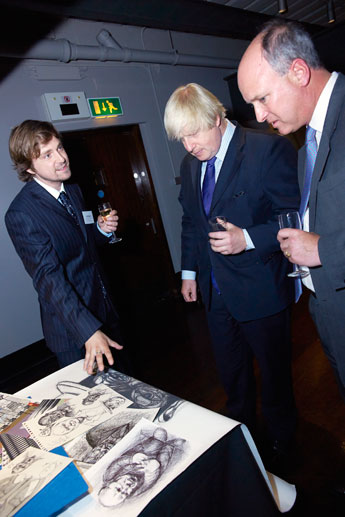 Best known as one of Britain's greatest wartime leaders, Sir Winston Churchill's lesser-known passion for oil painting is still inspiring young artists almost half a century after his death. Now, Kingston University is celebrating the success of two finalists in a prestigious annual art prize named after the former British Prime Minister.

MA Illustration graduate Carl Hoare and final-year BA (Hons) Fashion student Stefanie Tschirky were among an elite group of eight contenders for the 2013 Pentland Winston Churchill Design Award, run in collaboration with leading creative graduate network Arts Thread. Students and recent graduates from across the United Kingdom were invited to create a piece of two-dimensional art that encapsulated the relevance of Sir Winston Churchill to life in Britain today.

Carl was awarded second place for a piece he called The Extraordinary Tale of Young Sir Winston - a pen and ink drawing with watercolour and digital finish. The 32 year old from the Isle of Wight has always been fascinated by the two World Wars and has collected military memorabilia since he was young. Churchill was a towering figure in his obsession, so entering a competition which brought together this interest with his love of drawing seemed an obvious choice, he said. "I was always really aware of Churchill, of his achievements, of his finest hours. But my work delves back to when he was in his twenties, before all that," Carl added.

His piece is inspired by the young Churchill's extraordinary escape from a prisoner of war camp in Pretoria during the Boer War. This daring escapade became a crucial turning point for Churchill - and so for modern history when the doors of politics, previously stubbornly shut to the young man, were opened. Carl's dark and moody illustration of Churchill explores the impact his experience as a prisoner of war may have had on him throughout his later life. Competition organisers, the Pentland Group, were so impressed with Carl's work they have offered him a paid internship.

Carl credits his lecturer and mentor at Kingston University, MA Illustration and Animation course leader Robin Harris, as instrumental in helping him create his award-winning work. "Carl came to Kingston with a lot of talent and great initiative," Mr Harris said. "At first his work was mainly portraits, which remains one of his real strengths, but he gradually began to include other types of illustration. He was in a particularly good year group in which all the students benefited from experiencing the differences of each other's work." 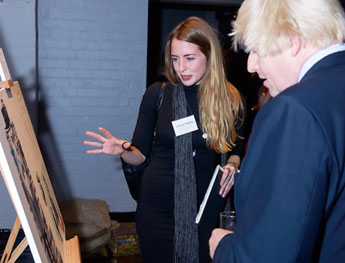 Fashion student Stefanie Tschirky was also recognised for her competition entry, Winston Churchill - The Journalist, Writer and Thinker. Her intricate black and white drawing of a sculpture of the great statesman, surrounded by towers of books, was highly commended.

"Churchill was such an inspiring subject because he's someone who is always present in our lives," Stefanie said. "His philosophy of never give up is an amazing way to live. His whole life was built around books and writing, so that's just how I built my canvas," the 23 year old, originally from Mels in Switzerland, added.

Associate head of the University's Design School  Elinor Renfrew said Stefanie's success was a true testament to her talent. "Stefanie is a very dedicated and talented fashion designer with a strong drawing style," Mrs Renfrew said. "At Kingston we place great importance on illustration as a key skill for future fashion industry professionals. It's something we really focus on throughout the students' course work, so it's wonderful to see the artistic talent of one of our cohort recognised in a competition open to students from all creative backgrounds."

The up-and-coming fashion designer has also been making a name for herself in industry circles. Stefanie's talent was spotted by American clothes retailer Old Navy, who awarded her an internship at its Californian headquarters earlier this year.

She described meeting Mayor of London Boris Johnson, who announced the art competition winners in a ceremony at the Churchill War Rooms in London, as one of the highlights of her latest success. "He is quite a character and his personality captures some of the spirit of Churchill," Stefanie said. "He had so much time for everyone and was really interested in the work of all of the finalists."

At the event, Mr Johnson, a lifelong Churchill fan, revealed plans to open next year's competition to students worldwide. "Winston Churchill is unquestionably a towering figure in British history, perhaps the greatest statesman of the 20th Century, and one of the foremost orators of modern times," he said. "He was also a talented artist, so it's fitting there should be an art competition in his name, which I hope will inspire young people."

Arts Thread director Alex Brownless, who was one of the competition judges, said it spoke volumes about the quality of teaching at Kingston University that two students had been shortlisted in such a major competition. "It is no coincidence that, of the eight national finalists, two were from Kingston University," he said. "The reputation of Kingston University, not just in the United Kingdom but worldwide, goes from strength to strength. The quality of creative work, whether it be fashion, graphic or other artistic endeavour, really is of the highest level." 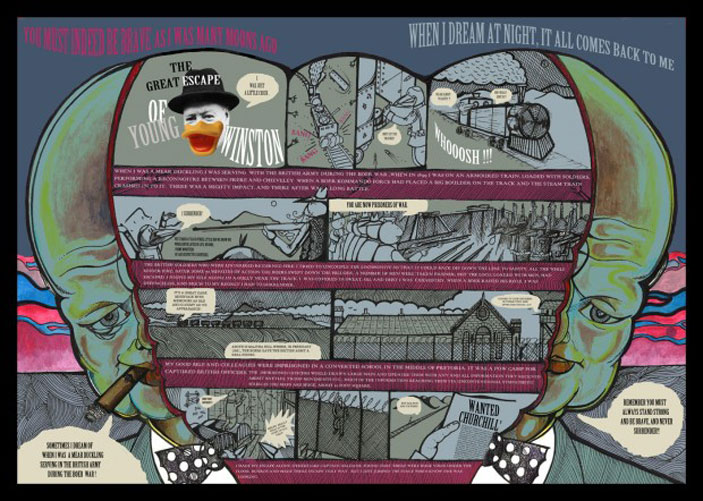