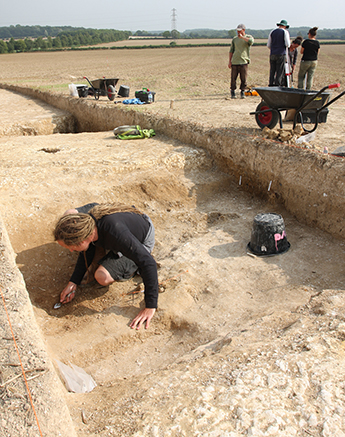 An archaeology team led by a Kingston University academic has delved back into a Neolithic site at Damerham, Hampshire, and uncovered a sink hole of material that may hold vital information about the plant species thriving there 6,000 years ago.

Dr Helen Wickstead said the find was completely unexpected and had initially confused the team digging on the farmland. This is the sixth year of the project at Damerham, about 15 miles from Stonehenge, with four areas of the temple complex excavated during the summer. The surprise came in the largest of the openings, approximately 40 metres long, where careful extractions revealed a layer of uncharacteristic orange sand and clay. Typically the archaeological survey would involve mapping and cataloguing such finds as bone, pottery and tool-making waste fragments.

"The site at Damerham is on chalk land, so we don't often find materials like this that capture and preserve the plant remains - pollen or phytoliths - from a specific time period," Dr Wickstead explained. "The sink hole contained orange sand with a yellow and grey clay and we are very hopeful that, within this material, there will be evidence of plant life that will help us continue to piece together the puzzle of human habitation on this significant site."

It was evident, Dr Wickstead said, that prehistoric people living in the area had also come across the sink hole too and excavated the material during their own construction work. A pile of matching waste material was also seen at one of the other mounds. "We didn't expect to find this and suspect it would have surprised the original architects of the site too," she said. "Moments of unexpected discovery could have had cultural significance for prehistoric people. The henge itself was a focus for rituals, life and death, so questions about the impact such a discovery would have had on their activity will be interesting to consider."

The prehistoric temple complex at Damerham is unusual because of the number of structures that are focused in one area, Dr Wickstead added. "The diversity of burial architecture here is intriguing," she said. "What is special about this place that meant generation after generation returned to the site to live, hunt, build and commemorate life?" 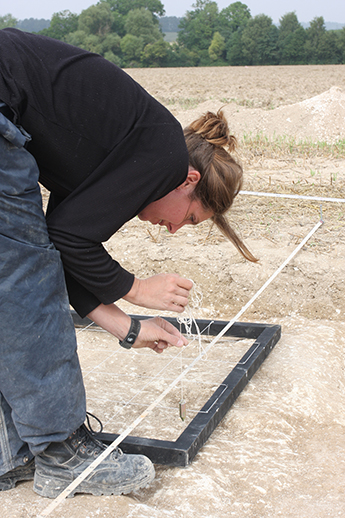 A variety of scientific techniques, including geophysical imaging which uses electrical currents to test the density of materials below the surface, have been employed during the project. This year, Kingston University MA Heritage student Jack Bartley joined Dr Wickstead on site to take part in the field walking survey.

"Once the field was clear of crops, we were able to walk across sections in search of items that will have been turned over by the plough," Jack explained. "This is important because it helps researchers understand how people used the land by examining what they left behind. We've been using GPS satellite technology to measure the search zones systematically. It's been great to be out in the field experiencing a real archaeological dig, especially since my dissertation is examining communities of interest, such as those involved in archaeology," the 24 year old from Surbiton added.

Evidence of archaeological remains at Damerham was first detected in 2003 when English Heritage's senior aerial survey investigator Martyn Barber spotted crop marks in a photograph. The different colours visible in the crops indicated that there were historical earthworks just beneath the soil and Dr Wickstead teamed up with Mr Barber to begin the long process of trying to find out more about the site.

"During the six years since we first opened the site, we've not only involved the local community but also brought together expertise from a range of specialists from geochemical analysts to artists, to make sure we make the most of the site while we can," Dr Wickstead explained. "Doing the dig is only a tiny portion of the work required to document these important sites, but it is the more urgent part because erosion by farming and other environmental factors will gradually diminish what's there."

Dr Wickstead, who is based at Kingston University's Faculty of Art, Design and Architecture, suspects the Damerham site holds many more secrets about human life in the Neolithic period. Although excavations are expensive and rely on funding from a variety of organisations, she hopes her team has demonstrated how important it is to stage similar projects in the future.

"The clues to earlier human life are all around us in the landscape and I would love to return and undertake a larger-scale dig at Damerham," Dr Wickstead said. "For now, the team will be examining and compiling the data already gathered and, as well as analysing the soil samples, plotting the artefacts and mapping the earthworks, we may also be able to undertake some gene sequencing on the bone fragments we found. All of this will help tell us more about how the people of this period lived and died in Damerham more than 6,000 years ago." 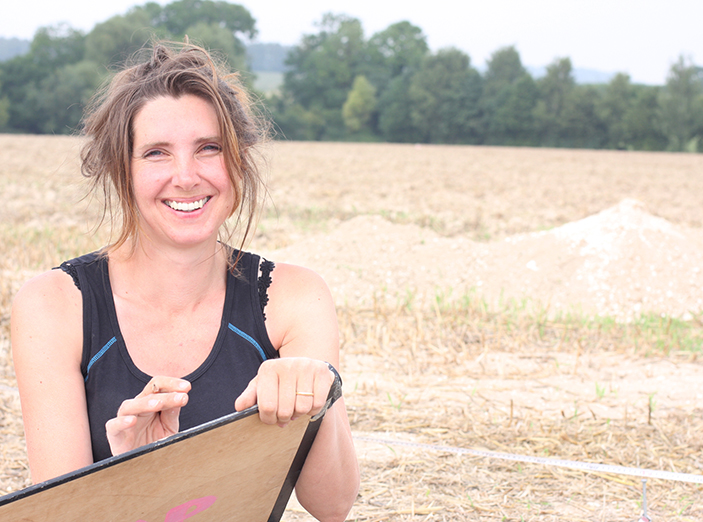