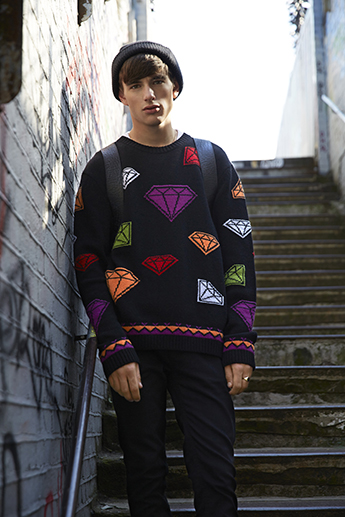 Kingston University fashion students have once again proven they have a way with wool, clinching a hat trick of industry accolades that will see their knitwear designs flying off the shelves at three leading High Street stores.

Plus-size chain Evans will join Topshop and Topman in stocking garments created by a trio of the University's budding designers - two of whom have even shared a cup of tea with His Royal Highness Prince Charles to toast their first foray into the retail world.

Siobhan Tsang and Trina Outram, both final year BA (Hons) Fashion students, have seen their work reach the shopping mecca of London's Oxford Street after taking part in a competition set by the Campaign for Wool. They were among the winners of its annual awards which aim to promote the benefits of yarn as a natural and sustainable material.

Belfast-born Siobhan's Fair Isle sweater, adorned with a computerised image of a rabbit, jumped out at judges looking for a product that would appeal to trend-setting retailer Topshop. "We were asked to come up with a design that celebrated English heritage," 21-year-old Siobhan explained. "I love rabbits - I think they typify the English countryside - but I wanted to make my garment quite funky to appeal to Topshop's market, so I digitised the motif."

Fellow fashionista Trina, from Tunbridge Wells, specialises in menswear and came up with a design she hoped would be just the right match for partner store Topman. Inspired by vintage fishermen's jumpers, she created a black sweater incorporating a colourful diamond emblem inspired by the album artwork of some popular indie bands. "I wanted to add a modern twist to my piece, so I incorporated the hand-drawn, doodle effect seen on a number of recent album covers," she explained.

The two young designers have not only seen their sweaters go on sale in shops, but have also had to brush up on their curtseying for a visit to Clarence House where they were treated to high tea with Campaign for Wool patron Prince Charles.

"Siobhan and I went to central London for a photoshoot with the four other competition winners," Trina recalled. "We were told we'd be meeting a special guest, but we had no idea who." The girls had their hair and makeup done and were given their newly-produced jumpers to wear. They were then whisked off to Clarence House where they were treated to afternoon tea and lemonade in the garden with the next in line to the throne. 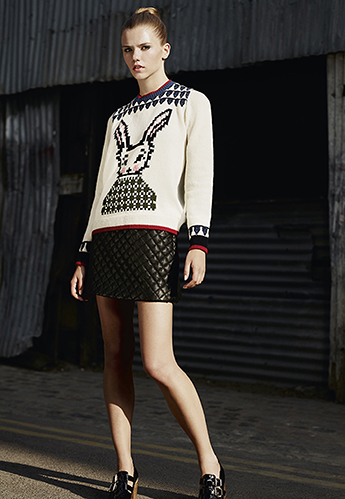 "It was such an amazing experience to meet Prince Charles. He spoke to each one of us and was really interested to hear a little bit about our jumper designs," Trina said.

The girls had to keep their royal rendezvous under wraps until the start of Wool Week in October. "We weren't allowed to tell anyone about the meeting - it was so hard to keep such a big secret," Trina added.

They are not the only Kingston knitwear designers to catch industry eyes either. Fellow final year fashion student Rebecca Partington triumphed in a competition set by plus-size retailer Evans to design a collection of statement knitwear pieces. The High Street brand asked fashion students to come up with a range of bright and bold concepts specifically tailored for larger women.

"We were asked to design for a muse, but I didn't want to choose anyone famous so I looked for inspiration online. I came across a blog by a lady living in Canada - she had posted lots of photos of her in city locations and I really loved her sense of style," Rebecca explained.

The 21 year old, from Emsworth in Hampshire, came up with a colourful print using bright pinks, blues and yellows, based on a fictitious character who travels through New York City by balloon. Her initial collection comprised six garments, including two jumpers, a cardigan and a dress. "I didn't think plus-size ranges had enough colour in them, so I deliberately made my collection really vibrant," she said.

Evans was so impressed with Rebecca's outfits that the company decided to produce five of the pieces. Its design team also used Rebecca's print to develop a pair of leggings and a tube skirt to add to the collection.

Rebecca said designing for plus-size women was quite different to the work she had done in the past as she had to think more about body shape and consider what would work for a particular figure.

"From the second year of their degrees, all the projects our students work on are industry linked, so they have to think extremely carefully about the clients they are designing for and the markets they are targeting," Ms Elliott said. "This helps ensure our graduates are as work-ready as possible and gives them an edge in what is a very competitive jobs market."

Siobhan and Trina's jumpers are currently on sale in Topshop and Topman's Oxford Street store and are also available to buy online, while Rebecca's knitwear collection will be filling the rails of Evans' flagship store in Marble Arch, London, early in 2014. 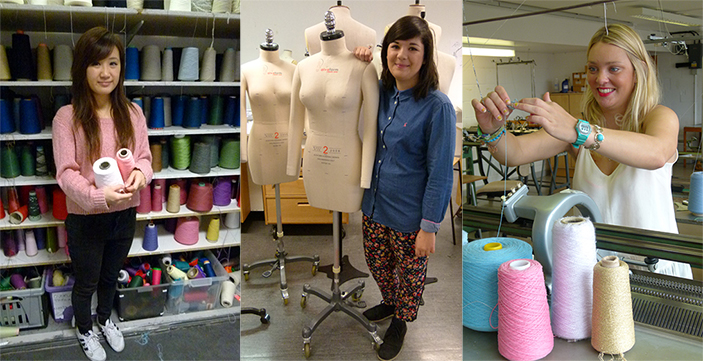