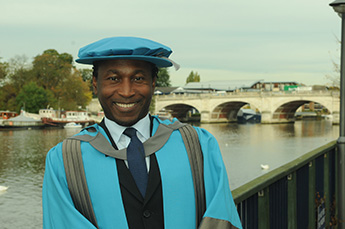 The outcome of the inquest into the death of Mark Duggan, which sparked the London riots in August 2011, will be watched by the whole world, a leading lawyer has predicted.

Leslie Thomas, who graduated from Kingston University in 1988, was speaking after returning to his alma mater to be named an Honorary Doctor of Laws. He is representing the Duggan family at the inquiry into the shooting by police officers on 4 August two years ago. The incident was a catalyst for rioting across London which spread to other parts of England and pictures of the city - due to host the Olympic Games just one year later - in flames were beamed around the world.

"These riots were so serious that the Prime Minister had to come back from his holiday - the whole world was watching, and it's the same with this case," Dr Thomas said. "I was on holiday in Turkey when the solicitor rang me to instruct me about Mark Duggan. I put the television on Euronews and saw wall to wall footage of London burning. It was chilling and, when I found out what the trigger was, I had to get involved."

Dr Thomas, 48, was named Legal Aid Barrister of the year in 2012 and said that being someone who instinctively asked questions rather than accepting things at face value had played a key role in his career, mainly dealing with human rights cases relating to topics such as deaths in custody. "I'm not an unquestioning acceptor and that's what makes me a good advocate," he said. "I was always the first one to annoy teachers in the classroom with questions. It was clear from an early age that my chosen career path was definitely the right one for me".

Raised in Battersea, Dr Thomas believes the experience of growing up in the 1980s and being surrounded by so much social change shaped his world view. "I was 16 in 1981 when the Brixton riots happened, and then going into my student days we had the miners' strike and the worst days of the apartheid struggle," he said. "Just as I was coming to the end of my time at Kingston Law School there was the break-up of Eastern Europe - all these things really affected me. Then, when I qualified as a young barrister, I was thrust straight into the appeal cases of the Birmingham Six and the Guildford Four, as these were cases my chambers were handling. It was an incredibly exciting, but also challenging, time." 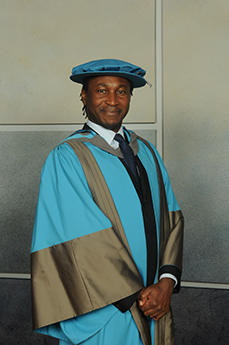 Dr Thomas puts his rise to prominence down to his determination as much as anything else. At school, a careers officer advised him to aim for a job in Tesco, or to work as a mechanic. He had also been written off as a failure at languages but in later life learned to speak Russian, just for the challenge. Education and educators had been significant influences on his life, making his honorary doctorate all the more meaningful, he explained. "Teachers have always played an important part in my life and there's no way I would be where I am today without Kingston Law School," he said. "I'm really touched to receive this degree. Kingston was a special place because it always had a great tradition in civil rights and human rights law and the knowledge passed on to me by lecturers such as Chris Clarkson and Professor Penny Darbyshire has really stayed with me."

Professor Julia Fionda described Dr Thomas as an inspiring role model for the Law School's students. "We are very proud to honour one of our most illustrious alumni," she added. "Dr Thomas's work as a civil rights barrister, campaigning for those who cannot speak for themselves, teaches us all about the importance of retaining our core values and belief in everything we do. His dedication has been massively important in the success of his career."

Asked what advice he would have for graduates looking to follow in his footsteps, Dr Thomas said the important thing was to strike a balance between enjoyment and opportunity. "Make the most of your university life," he urged. "It's a time of self-discovery, but you also need to be focused on where you want to go. Have a plan and a goal. If you don't know what you're trying to achieve, then you don't know what you're aiming for."