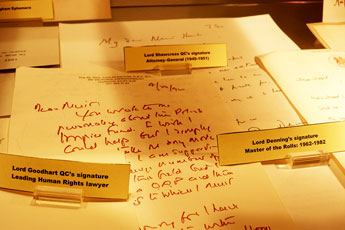 Kingston Law School  is set to become a leading destination for researchers thanks to a £5,000 donation from the Institute of Chartered Accountants in England and Wales (ICAEW) to help digitise a unique historical document archive.

Insolvency expert Dr John Tribe runs the University's Muir Hunter Museum of Bankruptcy. After the death of the leading QC in 2008, his family donated all his legal papers to Dr Tribe. The most valuable part of Professor Hunter's collection relates to his involvement in the drafting of the Cork Report in the late 1970s and early 1980s, which shaped Britain's current insolvency rules and regulations."It's an invaluable archive and it means Kingston will become the seat of the history of bankruptcy and insolvency," Dr Tribe said.

When he retired, Professor Hunter had piled up all his papers in boxes in his garage, Dr Tribe explained. "Now we're getting a chance to go through this treasure trove," he said. "There were even things like old gas bills mixed in with them - we're lucky that he was so meticulous about keeping documents."

Dr Tribe said although the documents were historical, the way they shed new light on the formation of legislation currently in use meant that they were of huge contemporary relevance - a position backed by the enthusiastic endorsement of many of the leading experts in the field. "We've already had statements of support from top experts such as Professor Ian Fletcher at University College London and David Milman of Lancaster," he added. "These people are fully behind it because this tranche of documents will prove invaluable for their research too. What we're able to do here is good for the discipline as a whole." 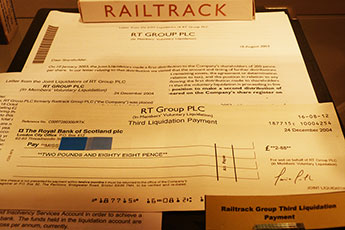 Having the archive was one thing, but finding out what was in it was another matter altogether, Dr Tribe explained, which was why the latest funding boost from the ICAEW was so welcome. "There's years of work to be done here - whoever comes after me will probably still be chipping away at it in 50 years time," he said. "At the moment I've got two PhD students working on it, one doing all the scanning and the other liaising with the technical people and cataloguing it. So far during the course of the last year we've managed to digitise about a third of it. My aim is to raise at least £20,000 to pay for everything that needs to be done. It's a very slow process but what we've managed to compile so far is great for scholars."

The document archive has been called a ‘goldmine' of information on the subject of insolvency, and ICAEW director Bob Pinder, who specialises in the field, said the Institute was happy to contribute to further awareness of the topic. "This archive will help us learn more about the underlying rationale behind the Insolvency Act 1986. The archive is a key component to an understanding of insolvency both in its historical context but also in terms of how we might develop policy in the modern age," he said.

With work on digitising the archive already well under way, Dr Tribe said he was happy to share the archive in a drip feed fashion, rather than waiting for the whole collection to be catalogued. "I want people to be able to use it straight away," he added. "Even though it's all historical material, it's relevant now and is going to make Kingston Law School really prominent in this field because anyone interested in reforming insolvency law in the future will need to access our archive."