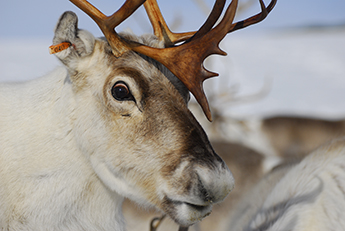 Nobody has ever come up with a definitive explanation for Rudolph's fabled red nose, but visitors to Kingston University's latest Café Scientifique session have had the chance to hear all about the curious case of his colour-changing eyes. Geneticist and DNA expert Dr Juliet Dukes, a senior lecturer from the University's School of Life Sciences, took centre stage to explain away the mystery of why reindeer's eyes switched from gold to blue depending on the season and what the implications of this knowledge might be.

The starting point for the research, carried out while Dr Dukes was based at University College London, was wondering why reindeer did not suffer from snow blindness - a condition that affects humans living in a similar environment. "Reindeer have been around for maybe as long as 1.6 million years whereas humans are only about 200,000 years old, so clearly they've had time to adapt in a way we haven't," Dr Dukes said.

Once Dr Dukes and her fellow researchers started investigating using eyeballs from reindeer herded by the Sami people in the Arctic Circle, it became clear that something remarkable happened with their vision. "As soon as we took the retina out, the back of the eye was startlingly different in colour and visible to the naked eye," she said. "In summer it was gold and in winter it turned blue.

"The tapetum - the mirror at the back of the eye - is made out of bundles of collagen which are spaced out differently from season to season so their reflection of light varies. This scatters more blue light throughout the retina, which aids their perception of ultra violet light - an ability humans don't have that helps them to be more aware of things like predators."

Researchers had not yet had a chance to examine other polar wildlife such as penguins, polar bears or foxes, Dr Dukes added, but it could be that this phenomenon was something common to other species that had also had to adapt to similar conditions.

The increased understanding of reindeer's visual ability has revealed some alarming information about humans' impact on their territory and behaviour. "The team we worked with in Tromso in Norway noticed how the migratory routes of reindeer tended to avoid power lines, perhaps because they could see the corona of the electricity leaking out," Dr Dukes said. "This demonstrates the effects humans have on the environment and the possible consequences. Just as building roads can separate animal populations and hinder their breeding, power lines may do the same and this could have implications for their survival."

Kingston residents and science enthusiasts keen to learn more about the topic joined Dr Dukes at Woody's Bar in Kingston on 10 December for the seasonally-themed Café Scientifique event, which was open to the whole community. "Café Scientifique is part of a national movement to try to explain specialist topics to a broader audience in an informal, non-intimidating atmosphere," she explained.

While there, Dr Dukes was even able to shed some light on myths about Rudolph's famous red nose. "Unlike in this country where deer's noses are wet like those of dogs, reindeer noses are furry - they have to be because of insulation in the cold, so people couldn't see the colour underneath anyway," she said. "There's no formal scientific explanation for the legend of Rudolph's red nose, but one interpretation is that maybe the reindeer consumed hallucinogenic mushrooms while eating moss and lichen and metabolised it, and somehow people ingested the urine and saw red noses as a result."

Café Scientifique has spread to more than 40 towns and cities around the United Kingdom since it started in Leeds in 1998. The idea is based on Café Philosophique, which philosopher Marc Sautet launched in France in 1992.