Physiotherapy lecturers and students from Kingston University will be lending a helping hand this Christmas, at Crisis the national charity for single homeless people.

The charity is well known for its winter campaign, Crisis at Christmas, when homeless people are invited in to Crisis' day centres so they are not alone over Christmas. While there, they are offered support and healthcare by volunteer nurses, dentists and now physiotherapists. Last year, the physiotherapy volunteers provided 104 treatments over six days.

The initiative was set up by Joanna Dawes, senior physiotherapy lecturer at the Faculty of Health, Social Care and Education at Kingston University and St George's, University of London. Joanna contacted Crisis when she moved to London from Glasgow.

"Crisis was interested in the work I had done with homeless people in Glasgow," Joanna said. "So, in 2012, we set up a pilot with qualified physiotherapists and students working together to support homeless people." 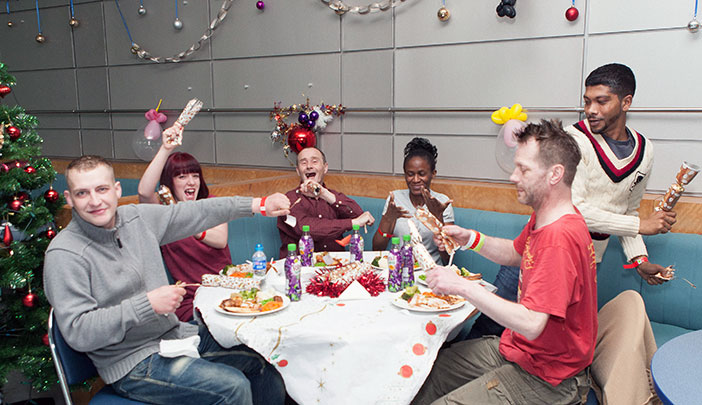 The service was such as success that the volunteers will be back in action this Christmas - busier than ever. Nicholas Blanning, Crisis at Christmas' services coordinator, said they are aiming to offer physiotherapy in all 10 of their London centres from 22-30 December. "Jo's enthusiasm and tireless work in organising and promoting the service has gone above and beyond what we could have expected," he said.

In addition to helping out, the students gain valuable experience and insight from the experience, as it takes them away from the classroom and their usual clinical placements. Third-year physiotherapy student Stuart Deaton will be returning for his second stint as a volunteer and he also helps Joanna coordinate the service.

"I wasn't sure what to expect - I had little experience of working with homeless people," Stuart said. "I was struck by the fact that most of them were suffering from the same musculoskeletal conditions that the general public suffer from. The big difference was that their conditions were exacerbated by their circumstances and limited access to mainstream healthcare."