Kingston University is inviting members of the public to view initial plans for a project which it says will transform the learning experience and help enhance the town.

The University plans to replace the current Town House building on Penrhyn Road, which was erected in the mid-1980s originally as a temporary, five-year measure, with a new, sustainable landmark building and also turn the front of the Penrhyn Road campus into an attractive, landscaped area. The site is on a key gateway to the town centre and has been identified in the Royal Borough of Kingston's Area Action plan as befitting a landmark building.

Vice-Chancellor Professor Julius Weinberg said the building would herald a fantastic future for both the University and the Borough. "We are responding to student and staff feedback about the kind of facilities needed to provide an exceptional 21st century learning environment," he explained. "We are proud of the University's reputation for excellent teaching and its creative approach to learning but we need to improve our estate to continually provide the best possible education for our students now and in the future."

The aim of the new building was to revolutionise the way students learnt, Professor Weinberg explained. "We also hope to bring the local community through our doors and we want to make our University a welcoming place for local people," he added. "So this is just the first in a series of consultation events with all the town's stakeholders."

A public exhibition outlining initial design plans is being held on Wednesday and Thursday (29 and 30 January) between 10.00am and 7.30pm in Room 102 at the current Town House building on Penrhyn Road. Click here to watch a video showcasing the project.

The exhibition comes as the University officially appoints Grafton Architects to design the proposed new building following a RIBA (Royal Institute of British Architects) competition. Grafton has a world-class reputation and the adjudication panel - which included the Dean of the Faculty of Art, Design and Architecture Professor Steven Spier and the Head of the University's School of Architecture and Landscape and director of leading firm DRDH Architects, Daniel Rosbottom - unanimously agreed that Grafton's proposal would give the University the building it needs to transform the learning experience.

Grafton Architects have won a number of accolades including a Civic Trust Award for sensitive construction in a conservation area for the Department of Finance building in Dublin and the World Building of the Year Award for the Universita Luigi Bocconi. The firm's project for the University of Limerick has been nominated for the 2013 RIBA Stirling Prize and Grafton's two founding directors Yvonne Farrell and Shelley McNamara have recently been shortlisted for the women architect of the year award by The Architects' Journal. Kingston University's Director of Estates Delivery Sean Woulfe said Grafton had an international reputation for designing thoughtful, beautifully-detailed buildings in the higher education sector. "Kingston is excited to be working with them on the first Grafton building in the UK," he added.

Shelley McNamara said she and fellow Grafton director Yvonne Farrell had found the education vision in the brief for the building extremely progressive as well as inspirational. "The building we designed was a direct response to this vision which called for openness, interaction, connection with the community of students and connection with the wider community of Kingston," she added. "We made an active open edge to the building, integrating a colonnade to the street, cascading terraces and gardens, drawing the new landscaped civic space on Penrhyn Road, right up through the building."

Kingston University Students' Union president Denza Gonsalves said she had immediately been drawn to the Grafton vision. "As soon as I saw the design, I thought I would be really proud to be a part of that university and study there," she added. "Kingston is top for producing student entrepreneurs. This idea of being open to collaboration, new ideas and working together has always been the essence of the University and that is embodied in this design."

Subject to planning permissions, construction is likely to begin on the new building in late 2015 with completion in 2017.

Watch a video about the University's vision for the new building: 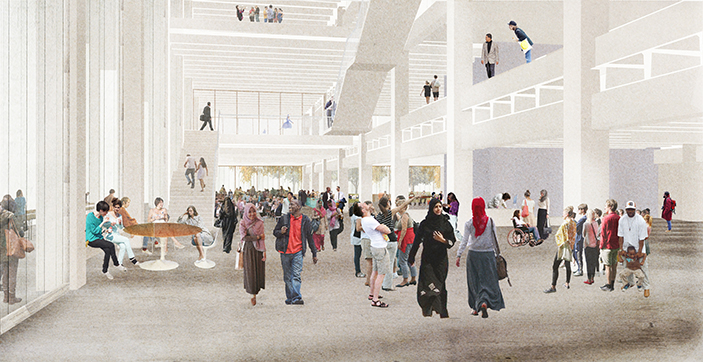