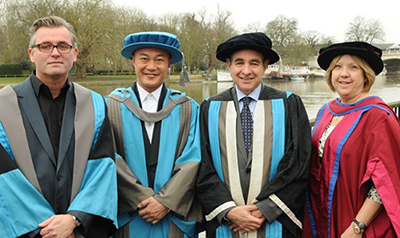 "What does success mean to me? I'm still striving and I'm still learning. In my opinion, success is having a kind and loving heart. That's the best. Nothing beats that."

This was the message to graduates from chart-topping Cantopop star Eason Chan on Friday 24 January, when Kingston University presented him with an Honorary Doctor of Arts at a graduation ceremony for the Faculty of Arts and Social Sciences, almost 20 years after the singer cut short his architecture studies at the University.

At the graduation ceremony at the Rose Theatre, director of Kingston International, Dr Heather Forland said: "There may have been a loss to architecture, but there was clearly a gain to the world of music."

Eason Chan delighted the crowd of graduates and their families by bursting into an impromptu rendition of Monty Python's 'Always Look on the Bright Side of Life' as he picked up his award. "Following your dreams is important but following your heart is vital," he said. "When I first received the invitation, I was flattered but I didn't think I deserved it as I hadn't finished my degree. But then, I showed the letter to my father and he said he always felt I'd owed him a degree in return for the excellent education he had paid for. The more I thought about it, the more I realised what a wonderful honour and brilliant recognition of my achievement in music this is."

At a packed press conference in the Rose Theatre Studio after the graduation ceremony, Vice-Chancellor Professor Julius Weinberg said Kingston was proud to honour such a successful former student. "I am delighted to have someone here who really exemplifies the values of the University," he said. "Not just his position, but also a singer, an actor and a philanthropist." Julius went on to point out to the assembled press that Eason has always been a high achiever: "Kingston's School of Architecture is amongst the best 50 architecture schools in the world – so he did pretty well to get a place here."

Eason Chan was clearly emotional about this latest achievement, saying: "I'm still not quite used to being called Dr Chan or Dr Eason. This Honorary Doctorate gives me something to look forward to now, and more of a responsibility to do well. Education is one of the most important things for the world, and I will keep learning, and try to be a good doctor."

As well as questions from the press, the conference gave a few new graduates the chance to speak to Eason. When former KUSU president TJ asked him for practical advice for young musicians, the new hon doc said: "For performing artists it's very hard for us to be sensible. We're emotional and sensitive. Meditation is very important, and exercise. Learn to focus. Follow your heart when you do it. Try spending 15 minutes to yourself today to clear your mind and your heart." 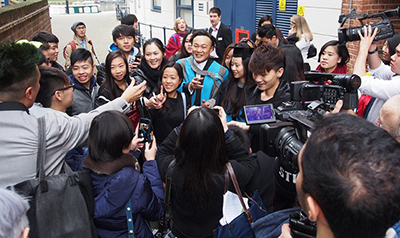 Bo Lin, who had just graduated with a Film Making MA said: "It was amazing to graduate alongside Eason. I loved his speech. It was a big surprise, and I think it's an important thing for China and Asia. I am a fan of his, not just his music, but his style and his personality. He's a good guy." Bo Lin attended the graduations with his girlfriend, current Fashion and Creative Economy MA student Si Chen, who chose to come to Kingston because Eason Chan had attended the University.

Half an hour after the press conference Eason Chan was still talking to new Kingston graduates and fans outside the theatre and reports of his award were starting to appear on news sites around the world.