There's no such thing as retirement!

"There's no such thing as retirement," according to Maria Jane Benge, speaking on the day of her father, Gerald Wasley's graduation.

In 2010 we featured an article about Gerald Wasley who completed a History MA at Kingston at the tender age of 75. We were very pleased to welcome him back to the Rose Theatre recently to award him his PhD for his thesis: 'The Civil Defence of Kingston and its Districts during the Second World War'. Gerald is now 85 and proves that you are never too old to learn!

Gerald's thirst for knowledge, research and writing has been present since an early age. Born in Acton, he left school at 15 years old and studied in his spare time to gain qualifications.

As a medical scientist, Gerald has significantly contributed to medical research in viruses and Aids in a career spanning more than 40 years. In 1985 he was awarded The BioMerieux International Prize for Medical Laboratory Science and while working as a medical scientist in 1988 he was awarded the United Medical and Dental Schools of Guys and St Thomas's Hospital Certificate of Honour.

Gerald's great passion is writing. He has written articles for The Lancet as well as his published books as a microbiologist which were written in the evenings and weekends whilst he was at work. Alongside his medical writing he has written history books in his spare time, which again, have made a sustained contribution to this field of knowledge.

Gerald is still actively involved in researching and his history books make a valuable contribution to recording United Kingdom history during the period of the Second World War; his next book about the D Day practice landings in Devon is going to be published this September 2014 at the age of 86. He is currently redrafting his book about Lawrence of Arabia in the West Country, a subject that he has been interested in for many years.

It was wonderful to welcome Gerald back to receive his PhD at Kingston. At the reception afterwards, many parents approached Gerald to ask him about doing a PhD and how long it takes, as they were inspired to go back to study. He continues to be an inspirational role model for the people that he comes across.

Find out more about returning to education, with a postgraduate course at Kingston. 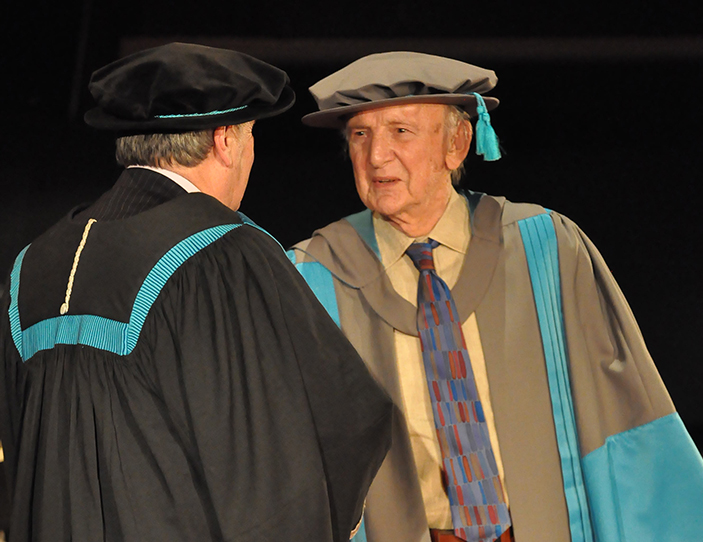