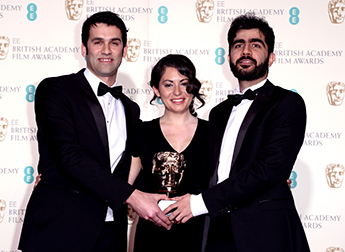 A Kingston University creative writing and drama graduate is celebrating after scooping a prestigious BAFTA award. Screenwriter Sarah Woolner was part of a team that carried off the British short animation award for the film Sleeping with the Fishes, which she made with producer James Walker and director Yousif Al-Khalifa. The romantic comedy, set to music composed by fellow Kingston graduate Matt Kelly, tells the story of a woman who lives a lonely life as a fishmonger, more at ease with her fish than her customers, until the day a delivery man who looks like a rainbow trout turns up.

The 30 year old, who graduated from Kingston University with first class honours in creative writing and drama in 2006, said the BAFTA had been entirely unexpected. "There was a delayed reaction from all of us when the winner was announced but we were totally elated," she said. "We didn't think too much about our chances of winning because it was such an honour to even be nominated and the two other entries we were up against were great animations. I'm really on cloud nine."

Sylvain Chomet's 1998 animation The Old Lady And The Pigeons was one of Sarah's inspirations for the short film but her late grandmother Mary Francis, who lived in Richmond, had been one of the biggest influences on her writing career, she said. "We were thinking about taking all sorts of different directions and then I woke up one morning at 3am and had the idea for this," Sarah explained. "That was when the hard work really started because it was then up to Yousif, who lead the team of animators, and James to bring the story to life, with me refining the story alongside. It took about a year to create our nine-minute film but I absolutely love the finished product from the nuanced sound design by Nikola Medic to the characterful music that Matt Kelly composed and the emotive style Yousif used to tell the story."

Sarah met both Yousif and James while completing postgraduate studies at the National Film and Television School, where they made the animation, and hopes to keep working with them in the future. Their critically-acclaimed animation had already scooped the grand prize at the 2013 Seoul International Cartoon and Animation Festival and won the audience's choice category for Best British Film at the London International Animation Festival before this month's BAFTA ceremony. Martin Scorsese, Brad Pitt, Angelina Jolie, Leonardo DiCaprio, Cate Blanchett, and Tom Hanks were among the A-list audience that applauded Sarah's success at the star-studded event at the Royal Opera House.

Sarah's current work includes a television series called The Taffia, based around a family of disorganised criminals in South Wales, and revenge thriller Mary Had A Little Lamb, inspired by her own experience of having a father who worked as an undercover detective on the Flying Squad. "Hopefully winning this BAFTA will give me a bit more exposure and allow me to write full-time and develop the projects I am working on at the moment," she said.

Sarah, who grew up in Swansea and Redruth, Cornwall and now lives in London, attributes the starting point for her love of screenwriting to her time at Kingston University. "My time at Kingston University allowed me to explore the many different avenues writing had to offer," she said. "I was fortunate enough to have superb lecturers from the creative writing and the drama departments who really opened my eyes to all the possibilities in front of me."

Associate Professor of English literature and creative writing Dr Meg Jensen said it was no surprise such a talented former student was making a mark for herself on a national level. "Sarah was an enthusiastic and highly committed student who we all remember well for her hard work and her extremely witty comments and conversation," Dr Jensen said. "Her enthusiasm and humour was infectious and she was generous with her time and support of the work of her fellow students. We are all extremely proud by what Sarah has achieved."