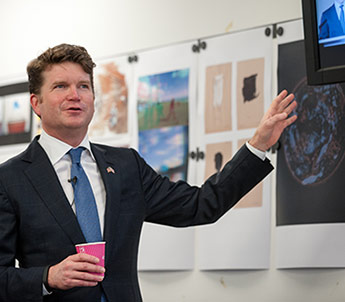 The United States Ambassador to the United Kingdom has visited Kingston University as the first high-profile speaker in a new series of Chancellor's events. Eager to see for himself some of the work the University's US-born Chancellor Bonnie Greer had been regaling him about, Ambassador Matthew W. Barzun toured the Knights Park campus where he also addressed a packed lecture.

Ambassador Barzun described the creativity and energy he observed during his visit as contagious, before speaking to staff and students about the close connections between the digital and creative economies. He drew on his own background as an internet pioneer, which saw him become the fourth person to be employed at CNET Networks where he served in a number of roles, including executive vice-president and chief strategy officer.

During a question and answer session, graphic design student Lizzie Reid asked Ambassador Barzun for his thoughts on technology enabling governments to eavesdrop on their citizens. He traced this back to the reaction of the security agencies to the terror attacks of 9/11, when they had been told never to let such a thing happen again. Since then, he said, technology had advanced and terrorists had become more clever, so the security services needed to place even more emphasis on staying one step ahead.

It was an issue that needed to be kept on the agenda, he added. "It's not enough that only American citizens feel comfortable, or even the citizens of our closest ally, the United Kingdom, feel comfortable," he said. "We need to consider the privacy concerns of 96 per cent of the world who aren't American or British."

When questioned about prominent court cases faced by Amanda Knox and Gary McKinnon and whether issues surrounding extraditing suspects between the United Kingdom and United States might damage the two nation's special relationship, Ambassador Barzun pointed out that the US had never turned down British extradition requests. "This is a matter of trust - whether we trust each other enough to allow our citizens to face trial in the other country," he said. 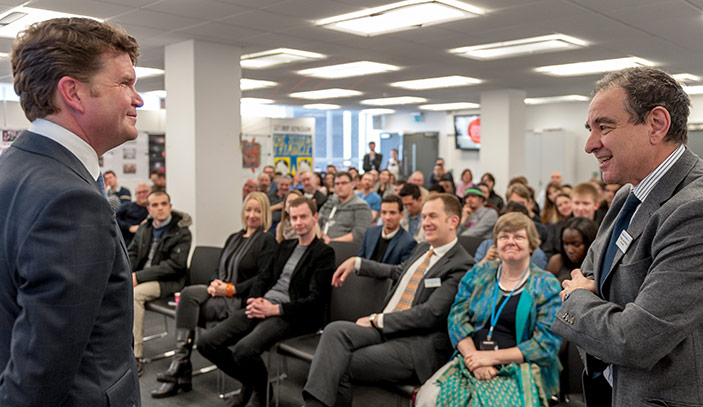 Dean of the Faculty of Science Engineering and Computing Professor Edith Sim said the ambassador's visit had highlighted the significance of cross-disciplinary work between arts and technology, particularly demonstrated through Digital Media Kingston and the University's expertise in gaming technology. "It was invigorating to hear how vibrant Ambassador Barzun found the environment at Kingston University and his presentation and openness in answering questions was inspirational, " she added.