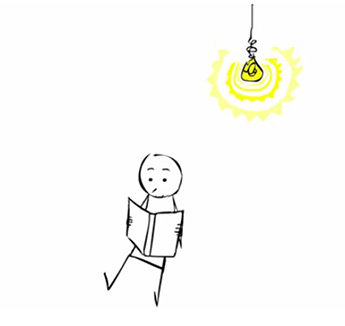 A Kingston University illustration animation graduate is basking in the industry spotlight after winning a prestigious national award from the Royal Television Society. Alicja Jasina's short film The Light Bulb scooped the undergraduate animation award after fending off competition from fellow finalists from the Irish School of Animation and Edinburgh College of Art.

The 24 year old, currently studying for a Masters in animation at the University of Southern California in Los Angeles, described her three-minute film as a true labour of love. The eye-catching animation focuses on a subject close to her heart - the very process of creating a short film. It follows the fictional challenges faced by a student, voiced by Alicja herself, dealing with constant interruptions and suggestions from a group of tutors as she strives to stay true to her original concept and create some simple footage of a stick man changing a light bulb.

"I think it's important not to lose your voice and not to follow others' critiques blindly and I tried to capture the essence of that in my film," she explained. "That's very much what my own lecturers at Kingston University instilled in me - to be open to feedback from other people but, at the same time, be brave enough to have faith in my own ideas and follow them through. I hope The Light Bulb inspires artists to brainstorm more intensely, be dynamic about the creative process and to not hesitate to go back to the drawing board when it might be necessary, even if that might seem painful."

Alicja, who grew up in Szczecin in Poland, has already had her film screened at the Internationale Kurzfilmwoche in Regensburg, Germany, and the Outbox International Film Festival in Lebanese capital Beirut. "Despite that, I didn't have any inkling that I might have a chance of winning the Royal Television Society award and it's such a boost to know my work has been recognised by the industry in this way," she said.

The judging panel, chaired by former BBC Productions chief creative officer Patrick Younge, described Alicja's work as "well-scripted, delightfully funny and subversive" and praised it for taking a wry, oblique look at the creative process of making a student film. She was shortlisted for the top trophy after winning the Royal Television Society's London region category, where she was up against two other high-achieving Kingston University course mates, Tanya Griffiths and Maryam Tafakory.

Course director Geoff Grandfield said the clean sweep of nominations for the regional round and Alicja's subsequent national success highlighted the strength of Kingston University's BA (Hons) Illustration Animation programme. "My favourite thing about Alicja's short film is that it is a classic student reaction to dialogue with their tutor. Her work examines that relationship in a humorous way, with visual language and content that are very well matched," he said. "She has kept everything extremely simple and it really works. Hopefully the great exposure that this award will bring will lead to Alicja being commissioned to work on more high-profile projects where she can really demonstrate her tremendous talent."

The Light Bulb from Alicja Jasina on Vimeo.