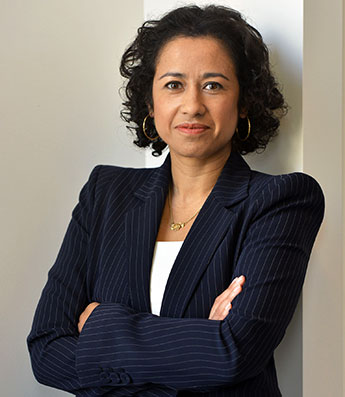 Kingston University journalism students received an insight in to how to carry out the perfect interview recently when award-winning broadcast and print journalist Samira Ahmed gave a talk to budding reporters.

The former Channel 4 News presenter, who currently fronts the BBC Newswatch programme and writes for the Big Issue, is a visiting professor for the University. She has been divulging the secrets of her successful career in journalism to students for the past three years. In her latest lecture, she turned the spotlight on interviewing skills - giving students her top do's and don'ts and guiding them through how to get the most out of an interview.

"There are lots of different formats - the questionnaire, the group reunion, the in-depth chat and the profile. However you do it, though, the really critical thing is that at the end of it you should be able to tell someone at least one thing you've learned from the interview," she said. "Even if it's someone who's already well known, try and get something new from them - you never know what they might come out with and sometimes a simple quote can generate a completely different story."

Russell Brand's Newsnight interview had been a great example of a fresh angle coming out of an interview, Ms Ahmed said. "Brand had been doing the rounds to promote a tour, but his comments about voting and political engagement became the catalyst for a whole new debate," she added.

Citing her own experience of interviewing characters as diverse as children's television presenter turned Liberal Democrat peer Floella Benjamin and former English Defence League leader Tommy Robinson, Ms Ahmed drew on media outlets as wide-ranging as Radio 4 along with legendary 80s pop music magazine, Smash Hits. She gave students one all-important piece of advice. "Do the maximum research and be as prepared as you possibly can be," she suggested. "I'm still amazed by how many people don't do their homework and end up wasting not only their own time but also that of their interviewees. Remember, too, that you never know when you might need people again in the future, so make sure you don't burn any bridges by being unprofessional."

There were almost as many permutations in terms of types of interview as there were subjects and many different aspects went towards painting the bigger picture, Ms Ahmed explained, even down to such details as the interview location. "I spoke to Floella Benjamin at the Liberal Club in London, for example, which turned out to be a really important element of her story," she said. "This was a woman who'd come to London as a young immigrant in the 1960s and experienced appalling discrimination, but now she'd risen to the House of Lords and finally felt at home in that prestigious building."

The types of questions asked by interviewers were also significant as sometimes it was the shortest, or on the face of it, the more trivial ones that drew out the most revealing responses. "Smash Hits was famous for quirky questions - one of its favourites was ‘does your mother play golf?' - and Q Magazine always used to ask ‘how much is a pint of milk?'" Ms Ahmed said. "The answer to that can be very telling as it shows whether the interviewee is in touch with day to day reality, or not."

Whilst the role of the interviewer was important, sometimes the best answers could be elicited by allowing the subject to question themselves, or for the interviewer to not even be involved in the process at all, Ms Ahmed said. She illustrated this with two examples from her own print and broadcast work - an article in the Big Issue piece with Doctor Who actor Peter Capaldi and a Radio 4 profile of Nobel Prize-winning physicist Peter Higgs. "The Capaldi interview was done in the format of ‘a letter to my younger self', which works so well because it provides clues about what shapes a person," she said. "He talked about being an outsider when he was a child and came out with the great line, ‘I wish I'd known that one day the geeks would inherit the earth'."

In contrast to Capaldi's self-analysis, Higgs did not feature at all in his profile; instead the story was told in a series of interviews with his associates. "The insights they gave were so revealing," she added. "One colleague talked about how this man who was involved in the most cutting edge scientific research lived in a flat full of vinyl records that looked straight out of the 1970s, and another commented on how experiments weren't Higgs's strong point and that all he really needed were his brain, a pencil and paper. Little things like that helped paint a great picture of this strange and reclusive man who has made such huge discoveries."

In a world of 24-hour news and the bombardment of ever-present media, Ms Ahmed said it was easy for young journalists to become overwhelmed by information but, as with so many other aspects of journalism, concentration was the key to a good interview. "If you want to do your job to the best of your ability each time, you have to craft every piece," she said. "Always focus on the next interview - ‘why am I doing it and what's the best I can get out of it?' Live by that and you can't go too far wrong."