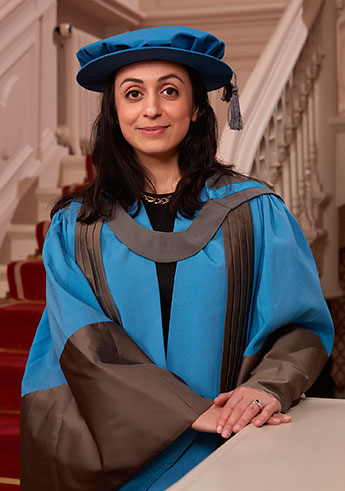 "If you'd asked me a decade ago if I could imagine being a government minister, I would have probably just laughed. Someone had to be the groundbreaker - but I never thought it would be me."

So said the former Norwegian Minister for Culture and Kingston graduate Hadia Tajik as she received an honorary doctorate from the University in a ceremony held at the British Ambassador's residence in Oslo. Ms Tajik's degree presentation, in recognition of her outstanding contribution to Norwegian politics, was the high point of an event celebrating the successes of more than 100 Kingston graduates based in Norway.

At the age of 30, Ms Tajik, who achieved a Masters in Human Rights from Kingston in 2006, is already one of her country's most prominent politicians, was its first ever Muslim cabinet member, and is something of a political pioneer. During her early days in England, though, Ms Tajik said she wouldn't have believed she could ever have the confidence to take on such a high-profile, responsible job. "I used to sit in my room crying because I was so homesick for Norway," she admitted. "I soon found my feet, though, and my time at Kingston really shaped my views so I'm overwhelmed to be honoured by the University which had such a profound influence on my life."

That slight sense of isolation has been a recurring theme for Ms Tajik. Born to Pakistani parents in the only immigrant family in the village of Bjorheimsbygd, she attended a primary school with just seven pupils. "Being a bit different from the norm has always been a feature of my life," she explained. "Growing up in a small village is an important part of my identity, but it also made want to see more of the world - which is what brought me to Kingston." Although there was no tradition of political activity in her family, Ms Tajik said a natural curiosity and the opportunity to air her views sparked an early interest in the subject. "Growing up, I was always able to discuss things I'd heard and seen with my parents," she added. "I was taken seriously and that matters so much to a child."

After being involved with the Labour Party's youth wing in her teens, Ms Tajik achieved a degree in journalism and television production from Stavanger University College followed by a Masters in Law from the University of Oslo. At this point in her life she wanted travel and broaden her knowledge about human rights. "I'd always been fascinated by the UK, I knew what type of course I was interested in and I wanted to be somewhere close to a big city but not in it - so Kingston was the perfect choice," she said. fter the initial tears, the new student settled in and said her lessons with Professor Brian Brivati, in particular, would stick with her forever. "He'd challenge us to come up with better arguments or to approach things from a completely different perspective - and that's particularly important in politics," she added.

In spite of her activist background, Ms Tajik became a journalist until 2006 when she was offered a job as a political advisor to the Minister of Labour. "I knew it could be life-changing so decided to give it a go and if it wasn't for me, at least I would have tried," she explained. "I soon realised, though, that this was what I was meant to do because it gave me a fantastic opportunity to try and influence society for the better."

Within two years she was a member of parliament, but another turning point came on 22 July 2011, when far-right activist Anders Breivik killed 77 people - many of them members of the Labour youth movement. "That was a defining time for the whole of Norway," she said. "What he did could so easily have resulted in hatred and violence but the Norwegian people responded differently - we united." Although she acknowledged that Norway still had many unresolved issues relating to what happened that day, Ms Tajik said she had become part of the response after she joined the cabinet in 2012. "It was definitely symbolic to have a female, Muslim culture minister," she said. "Freedom to express your culture is a critical part of a democracy - but sadly the words of people like Breivik still resonate with some people in our society."

Despite having originally envisaged a different career, as she enters her 30s, Ms Tajik is firmly established in the world of politics. "My background made me acutely aware of how important it is for society to do as much good as it can for as many people as possible," she said. "I learnt that those who really need to be heard, are also the ones without a voice - and I want to provide that voice."

Kingston University Vice-Chancellor Professor Julius Weinberg, who conferred the Doctorate of Arts on Ms Tajik, said she was a true inspiration to young people everywhere. "Hadia Tajik was the youngest ever minister to serve in the Norwegian government," he said. "She has campaigned for the protection of minority rights, is putting cultural understanding and diversity on the Norwegian political agenda and, above all, is a role model for young Norwegians who can see that whatever their background, with hard work and the determination to succeed, anything is possible." 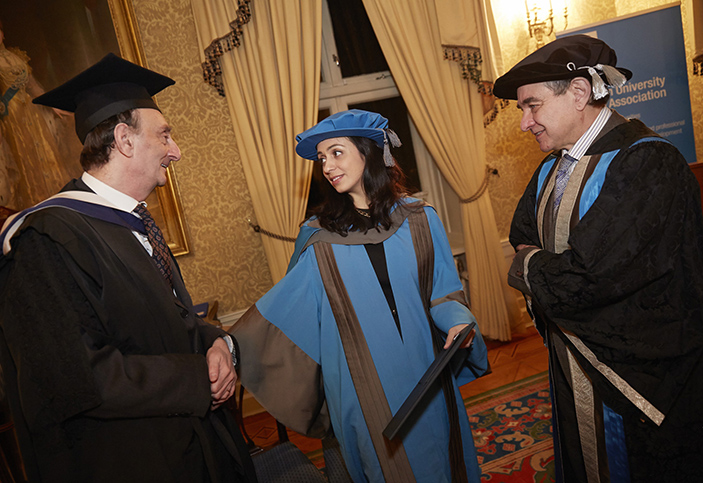