Sports days are all about winning and the annual alumni versus students sports day was no exception. This annual event took place at Tolworth Court sports ground where our mighty students battled it out against our awesome alumni, in netball and rugby.

First up was the ladies netball. The sun was shining, the competition was fierce, there was a lot of friendly banter. In the end though there was only one winner – the students, they won 30:32 and they were delighted. 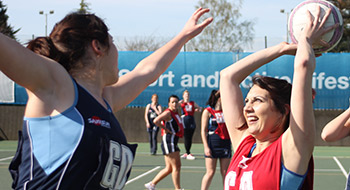 Charlotte Rose, psychology and criminology student and president of the Kingston University Netball Team summed up the day: "I am really proud of all the girls, we have three student teams now and today we played a mixture of girls from all three teams. One of the alumni playing is actually our coach, Helen Humphreys, and she was coaching us during the match! Playing netball has really helped with my studies, everyone needs a break and it's really nice to spend time with people who aren't on your course. We are just one big Cougar family!"

Rosie Barsby, Drama and Creative Writing BA(Hons) student: "I joined for the social side initially, then I realised that I really just wanted to do well for the team. It's our second year playing rugby at Kingston, and 80 per cent of us have never played rugby before. To be honest my grandma wouldn't let me play!" 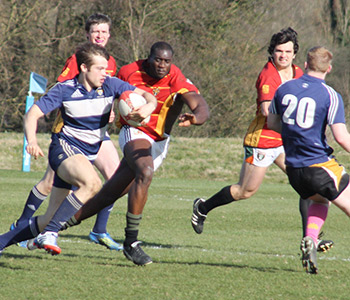 The rugby result was similar story, 15-a-side, two halves of 30 minutes and once again the students were victorious – 26:24.

La'mel Clarke, English Literature BA(Hons), third-year student said: "Even though the alumni were really big and experienced, we did get to show our worth on the day."

Tom Gould, Sport and Exercise Science BSc(Hons) graduate (2009): "I played rugby for the three years I was at Kingston. We were a really tight-knit group, one of the guys out there playing was an usher at my wedding. I now live in Richmond and work for Ferrari."

Nathan Hearn, Economics and Finance BSc(Hons) graduate (2010): "I captained Kingston's rugby team whilst I was here. I then went on an exchange programme to the US, North Carolina. I have now set up my own business, a gym in Sussex.

Scott Herdman, Construction Management BSc(Hons) graduate, left Kingston, joined the Army, did some IT work and is currently a retained firefighter.

Greg Adams, Sports Science BSc(Hons) graduate, lives and works in Qatar as a performance analyst in football: "Just back to see the boys, nice to catch up with good friends." 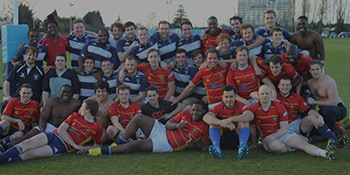 Thomas Perks, Business Management BA(Hons) graduate (2010) was the second team rugby captain and social secretary and now works for a power generation company, Cummins. "Rugby has given me a lot. Whilst at Kingston I had to liaise with local businesses for sponsorship, I had to arrange all the logistics of getting the team to an away game. We had some amazing nights at Weatherspoons!"

A final word from the captain on the day Joe Hogg, Business Management BA(Hons) graduate (2011): "We were disappointed to lose, just two points in it! I think we lacked a bit of fitness. If I'm honest I don't think my rugby really helped me with my studies, as we'd train every Monday, Tuesday, and had matches on Wednesday, but I wouldn't change a thing about my time at Kingston."

A big thank you goes to the organiser, Toby Seward, who is the president of the rugby club, who wasn't able to make the day.

View images from the day on the Kingston University Alumni Association's Facebook page.