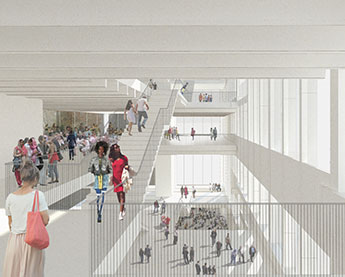 The local community, as well as staff and students at Kingston University, have welcomed a proposed new £55m landmark building in the town.

The University plans to replace the current Town House building on Penrhyn Road, which was built in the mid-1980s originally as a temporary, five-year measure, with a new, sustainable building and also turn the front of the Penrhyn Road campus into an attractive, landscaped area. Some 275 people attended a public exhibition at the end of January which outlined initial design plans for the re-development of the site that is on a key gateway to the town centre. This area has also been identified in Kingston Council's Area Action plan as befitting a landmark building.

People attending the exhibition were asked to complete feedback forms and the vast majority (98 per cent) of those who did so felt the current Town House needed replacing to provide the University with quality learning facilities for the 21st Century and beyond. Some 97 per cent of the 185 responders also thought the new Town House should be of a high quality design to meet the Borough's aspirations to have a flagship building on this site.They particularly liked the design concepts as well as the civic and community benefits that they felt the facility would bring.

Vice-Chancellor Professor Julius Weinberg said he was delighted with the interest people had shown in the plans and the positive feedback received. "This confirms we are on the right tracks and that what we want to achieve will transform not just the way people learn but also how the University interacts with the wider community," he said. "The teams looking at the design of the new building and the landscaping are considering all the feedback now that the detailed design process is underway. We look forward to sharing detailed proposals this summer once the plans are more fully evolved." 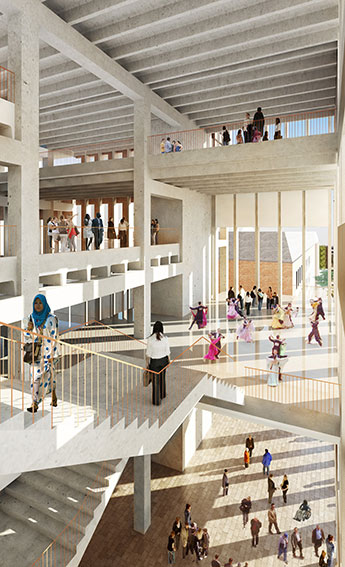 small number of feedback responders suggested that the proposed reduction in car parking at the front of the campus might be an issue for some University staff. However, the majority of people thought the planned new landscaped areas would improve the setting of the building and the view along Penrhyn Road. A few of the University's neighbours in Grove Crescent were also interested in how the new building would look and the University is discussing those detailed points with the residents on this road.

The University's Director of Sustainability Dr Victoria Hands said the institution was committed to reducing the negative environmental impact of travel including air quality and emissions. "This is a key part of fulfilling our ethical and statutory obligations to reduce carbon," she added. "It is the University's policy to reduce private car travel to its sites, and staff and students are actively encouraged to make use of alternative means of transport."

There were also a number of questions raised during the exhibition about how energy and acoustics would be managed in a building which would be largely open plan. Director of Estates Development Julia Bond said both were an integral part of the design process. "It will be important to get these elements right for the building to work well," she confirmed.

The University appointed award-winning Grafton Architects to design the building following a RIBA (Royal Institute of British Architects) competition. Grafton has won a number of accolades including a Civic Trust Award for sensitive construction in a conservation area for the Department of Finance building in Dublin and the World Building of the Year Award for the Universita Luigi Bocconi.

The University hopes the proposed new building will:
• act as main reception for all campuses;
• be a facility where learning activities from all faculties can be showcased;
• house learning services, resources and project spaces for all University students and staff;
• bring the local community, as well as visitors from further afield, in to the University;
• support everyday use but be flexible for special uses;
• be adaptable to change over time;
• be sustainable.

Subject to planning permissions, construction is likely to begin on the new building in late 2015 with completion in 2017.