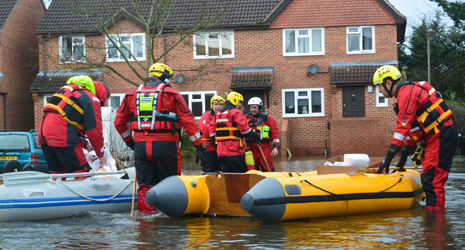 Environmental hazards and disaster management students from Kingston University have been getting a first-hand insight into the challenges of co-ordinating some of the emergency response efforts following the flooding in Chertsey earlier this year.

One of their lecturers, Dr Ian Greatbatch from the University's School of Geography, Geology and the Environment, is also Surrey Search and Rescue Service's head of flood and technical rescue, so when the River Thames burst its banks after weeks of heavy rainfall the authorities looked to him for help. "There's a gold, silver and bronze level national command structure, with gold being high-ranking individuals from frontline organisations such as the police and fire service and silver one level down - giving tactical advice on how to deploy any resources needed. That's where I came in, being put in charge of the Association of Lowland Search and Rescue," Dr Greatbatch explained. "I had a number of teams from across the country at my disposal which I was able to put into the water so I was organising where they were deployed and making sure they did the job as effectively as possible."

In addition to his academic expertise, Dr Greatbatch's background as a former surf lifesaver and a volunteer for the Royal National Lifeboat Institution meant he was involved both from an administrative point of view and also in a practical role. "Every search and rescue team deployed should have a swift water rescue technician to back them up - they are able to swim in the water rather than just wading as the rescuers do. One day we were so busy we ran out of these technicians so I had to go in and be one myself," he said. 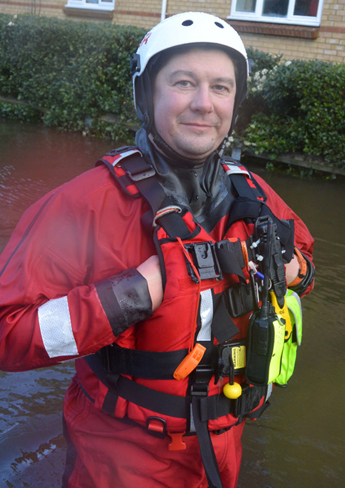 Dr Greatbatch described the level of flooding he witnessed as "immense", with street after street under water, but added that the nature of floods meant they were a disaster that could only be responded to, rather than tamed. "If you're trying to manage something like a forest fire, at least you can work towards putting that out. However, in this case, the problem was the weather, so there's not a lot you can do," Dr Greatbatch explained. "If the conditions are right for it to happen and the Thames floods, once it starts all you can do is try to help with the rescue and that's my particular field of expertise."

The sight of so many damaged houses and ruined lives was deeply upsetting, he added, and the incident showed all sides of human nature. "In some places there was a real Blitz spirit, with communities really coming together. However one day, when the weather was at its very worst, we were sent out by Fire Silver Command to what we thought was an old lady in need of help - it turned out to be a woman in her 40s who'd phoned saying she needed cat food. A Land Rover full of guys with a lot of skills were taking managed risks to go out in those conditions and, when they got there, it turned out to be for something like that."

The specialist nature of the work Dr Greatbatch and his team carried out meant that, while members of the public were keen to assist, often they were more of a hindrance than a help. "They mean well but, especially in a rescue situation, the Fire Brigade wouldn't want untrained people involved," he said. "You need technical expertise, so we tried to keep the public away from particular hotspots. The response from our teams was brilliant and that's because all year round - even in the summer when it's hot and dry and it would be impossible to imagine floods - they're honing those vital skills, because when something does happen they're really needed."

After six days, once it became clear the situation was not going to get any worse and that no lives were in danger, Surrey Fire Service downgraded the incident from a rescue phase to a recovery one. "This means no one is in danger and the priority is pumping water out and salvaging property," Dr Greatbatch explained. "That's the job of the local authorities and community volunteers so our work was done - and, to be honest, after six intense days we needed a break." Not that it was a long one, he said. "That was Saturday morning and later that afternoon I was back answering student emails, marking assignments and preparing data for a practical lesson the coming Monday morning."

Dr Greatbatch is looking forward to sharing his unique perspective and detailed knowledge of the flood response with his students. "Kingston University's motto is ‘led by learning' and for me it's also ‘led by experience'," he said. "I give a number of lectures on flood rescue and management, so it will really add to my teaching to be able to say ‘When I was there, wading down the street doing it...'. I'm someone who's been there at the sharp end of it all, implementing the theory for real." 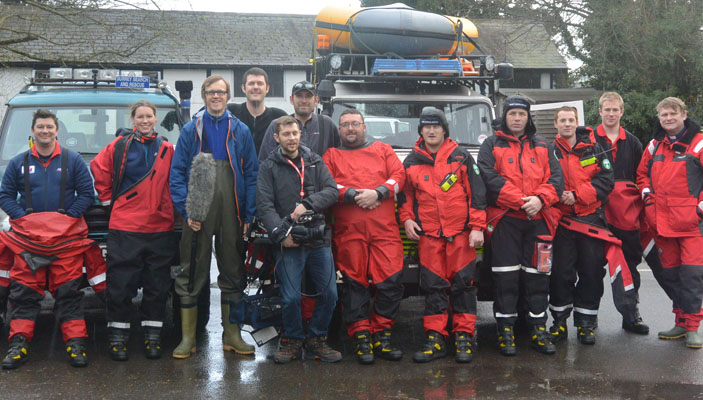