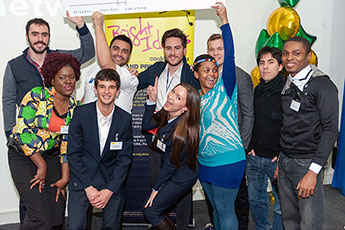 Kingston University has topped the tables for graduate start-ups for the fifth year running, according to data released by the Higher Education Statistics Agency.

The University's entrepreneurial expertise has seen off competition from 150 higher education institutions across the United Kingdom, after it helped its business-minded alumni get 270 companies off the ground in 2012/13 – up from 201 the previous year. The Higher Education Business and Community Interaction Survey 2012/13 also shows Kingston University has generated more start-up companies than all of the nine higher education institutions in Wales combined.

Vice-Chancellor Professor Julius Weinberg said he was delighted Kingston University had once again achieved pole position in the annual survey. "Kingston University has long been a driving force in fostering innovation and has a strong track record in nurturing and supporting budding businesses and small and medium enterprises across the region," he said. "We are committed to equipping our students and graduates with the knowledge and skills to create new businesses, new jobs and new wealth. This up-and-coming generation of entrepreneurs will be a pivotal part of Britain's economy as it moves forward."

The University's head of entrepreneurship education, Dr Martha Mador, said a number of factors contributed to Kingston's start-up success story. These ranged from the breadth of subjects at the University – allowing students to acquire specialist skills in areas as diverse as art and design, technology and engineering – through to its location close to the business heart of London and the fact that activity was underpinned by the in-depth knowledge of academics at Kingston's Small Business Research Centre. "We are committed to equipping our graduates with the confidence to consider enterprise at an early stage in their careers," she added. "It is a tribute to their entrepreneurial flair and business acumen that so many of them are now creating something new."

Kingston's successful graduate entrepreneurs include Tom Harrington who founded wesold.co.uk – Britain's first pay-per-view online estate agency, which offers homeowners a more cost-effective means of selling their property. Rashid Somauroo, meanwhile, is also about to make a mark in the property market through the launch of social media platform Property Flock, which has secured significant venture capital funding. Elsewhere, Shruti Barton, who only recently graduated from her Advertising and the Creative Economy MA, has scooped the Entrepreneur of the Year trophy at the PEA Awards 2013 after creating the Flower Pozzy – an eco-friendly, reusable device for carrying fresh-cut flowers.