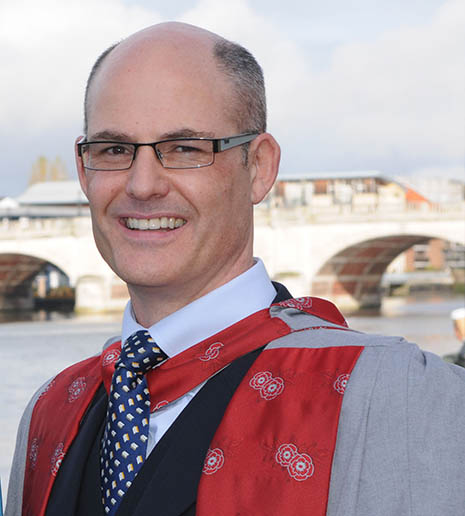 A Kingston University academic has been named the Society of Biology's Higher Education Bioscience Teacher of the Year. Dr Nick Freestone received the award at a ceremony at the 2014 Heads of University Biosciences (HUBS) spring meeting in Buckinghamshire.

A physiology and pharmacology specialist, Dr Freestone was one of three candidates vying for the honour. The judges were particularly impressed with his commitment to placing students at the heart of teaching and providing them with high quality feedback.

Dr Freestone, who is an associate professor and course director for undergraduate pharmaceutical science at Kingston, makes a point of trying to get to know all his students by name. He uses a range of methods to support student diversity - from widening participation right through to stretching those who emerge as his most able students. As the subject area leader for physiology and pharmacology, he also plays a significant role in maintaining links between Master of Pharmacy teaching teams at Kingston University and St George's, University of London.

His passion for ensuring his students get the very best out of their time at university stems from his own experiences of higher education. "I was the first in my family to attend university and remember how it felt not really knowing how the system worked and not being familiar with the techniques I needed to master key tasks such as essay writing," he explained. "I'm always conscious that students from such backgrounds might not perform to their full potential in exams because they don't get enough chance to practise and could be tempted to rely too much on getting by on their coursework." To counter that, he dedicates time to repeatedly marking essay drafts from students to help them develop their confidence and knowledge. "I've been doing this for several years now and have seen a definite increase in their exam grades as a result," he said.

Dr Freestone has also found ways to encourage high achieving students to push themselves further. "A lot of our undergraduates come to study pharmacy at Kingston University after getting As and Bs at A-level and I'm determined to make learning as challenging for them as it is for everyone else," Dr Freestone said. To help nurture their abilities, he has developed an optional module which offers them tuition in more advanced laboratory techniques and theory. This extra input encouraged them to work hard and strive to perform to the very best of their abilities. "The results prove that even the most able students can be targeted to do better," he said.

Dr Freestone was last year named Kingston University's most engaging lecturer, adding to the lecturer of the year title he carried off while based in the former Faculty of Science. This year, he has been made a senior fellow and academic associate of the Higher Education Academy and a fellow of the Society of Biology.

He described capping off those successes by being chosen as the recipient of the Society's higher education teacher of the year accolade as incredibly humbling. "I'd like to express my unreserved admiration for the efforts of the other finalists and every other bioscience practitioner in the United Kingdom," he said. "I hope the award will act as a spur to improve my practice for the benefit of my students, both now and in the future."

In recognition of his achievement, Dr Freestone received the Ed Wood Memorial Prize of £1,000, one year's subscription to an Oxford University Press journal of his choice and a year's free Society of Biology membership. He was also awarded a one year licence by Labster, one of the sponsors of the HUBS spring meeting.