"Alumni events are a great opportunity to bring together the Kingston family and let them know more about what's happening at the University and future plans, such as the iconic new building for the Penrhyn Road campus," said the Vice-Chancellor, Professor Julius Weinberg.

"It's the first event we've held in Washington and we were delighted that so many alumni were able to attend," said Helen Trott, Head of Development, Alumni Relations and Events. "We are thrilled that alumni have travelled not only from Washington and surrounding states but also from Arizona, Illinois and even from Canada! It is wonderful to hear about our graduates' careers since leaving Kingston and their many achievements in their personal and professional lives." 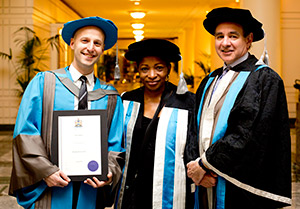 Stephen Spier, Dean of Faculty of Art, Design & Architecture introduced Glenn Adamson, for the award of an honorary doctorate in recognition of his outstanding contribution to research and curatorship in art and design. Glenn is currently the Nanette L Laitman Director of the Museum of Arts and Design (MAD) in New York City. Sadly, Glenn's train was delayed outside Philadelphia and so his award was made in absentia. However, Glenn finally made it to Washington and received the honorary degree at the after party that followed the main alumni reception.

Kingston's Chancellor, Bonnie Greer, spoke about the challenges we all face and how the current generation needs more support than ever to tackle the global issues that lie ahead: about the challenges of moving to a country, but not belonging totally to that country, something that the Kingston alumni who emigrated to the USA could readily identify with and about her early life in Chicago, the daughter of working-class parents and the eldest of seven children. It took Bonnie six years to complete her degree as she worked to fund herself through university. 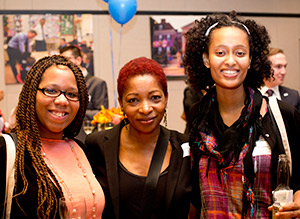 Bonnie moved to the UK, became a British and was awarded an OBE in the 2010 Queen's Birthday Honours List in recognition of her services to the arts – an achievement that neither she, nor her beloved father, could not have imagined possible.

Bonnie asked everyone to consider helping support the current generation of Kingston students, but concluded by encouraging us all to ensure it was a night to remember!

If you are based in the USA and would like to be kept up to date about future events and news from the US, please email alumni@kingston.ac.uk.

View the photo gallery from the event.