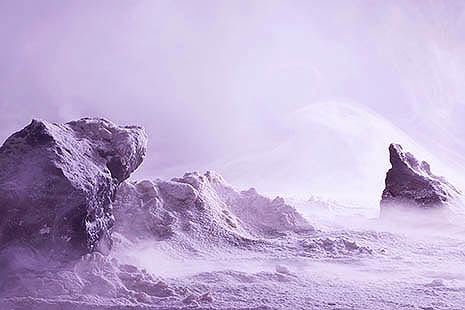 A Kingston University photography student is getting set to unveil one of his latest projects in London's renowned Saatchi Gallery.

Luke Evans, who is in his final year of a graphic design and photography BA (Hons) degree at Kingston, was left speechless when he received a phone call from the world-famous gallery asking him to showcase some of his recent photographs as part of a forthcoming exhibition.The eye-catching series, named Forge, portrays grand landscapes deceptively created from small items in Luke's kitchen.

The 22 year old from Hereford was approached by the gallery after staff stumbled across the collection of six images on the internet. Luke was told his work would appear in the New Order: British Art Today III exhibition, expected to launch later in the year, after his portfolio was shown to gallery owner and advertising mogul Charles Saatchi. "I never imagined my work would generate so much interest and to have this project go on display at the Saatchi Gallery really will be a dream come true," Luke said.

The idea for Forge first popped into Luke's head while he was baking bread and accidentally knocked flour on to his kitchen work top. He was immediately struck by how much it resembled an alien landscape. "I often see other things in objects such as faces or animals and I've always wanted to explore this concept so, when I spotted the Mars-like scene, I quickly snapped some photos on my phone and it all really started from there," he explained. "Turning the images in my head into reality, however, was quite complicated because the camera needed to be at a very specific angle. If it wasn't in quite the right place my fingers, hand or even face could appear in the pictures which would totally distort the image."

The objects photographed for Luke's collection were created using common household products such as self-raising flour, paint, fragments of brick and glycerine throat medication. As they measured just a few inches, Luke used a popular photographic technique called tilt-shift to achieve the grand sense of scale.

Most of the six images in his collection would be at home in a science fiction film, including one featuring a vivid pink landscape, which is Luke's personal favourite, and another portraying what appears to be a giant outcrop of rock. "That was actually made from a miniature fragment of brick while another image of a wave crashing against a different rock was formed using salt, a brick and shaving foam," he explained. 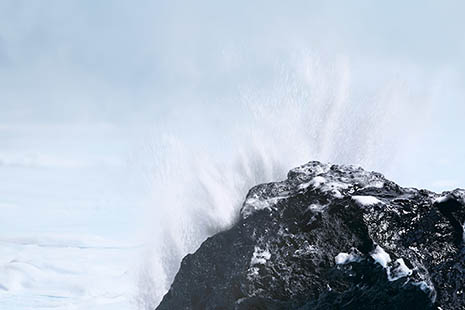 Although each picture had presented its own challenges, Luke said the sea spray image had proven the most difficult to capture. "I was holding a cup of salt in my right hand to throw at the rock and, at the same time, waving fog over the set with my left hand and it was pretty hard to do both and press the camera shutter all in sync," he said. "It took weeks to get it just right and I must have taken 600 frames in the end but I'm delighted with the result because it always fools people."

The Forge collection is not Luke's only contribution to the forthcoming exhibition at the Saatchi Gallery. An experiment he took part in with fellow Kingston student Josh Lake in 2012, which saw the pair swallow photographic film and then frame the results, will also go on display at the gallery in the Duke of York's headquarters in London's Sloane Square.

"My time at Kingston University has allowed me to explore the many different avenues photography has to offer and I've really been encouraged to push the boundaries of what can be achieved," Luke said. "My lecturers have definitely opened my eyes to all the possibilities in front of me."

Senior lecturer Paul Jenkins described Luke as a special talent who would be a graduate to watch in the future. "Luke brings passion and sensitivity to the creative process and I've no doubt he will become a force to be reckoned with in the world of photography," Mr Jenkins said. "Throughout his time at Kingston University he has produced wonderfully imaginative pieces of work that communicate on so many levels. His photography sparks debate and encourages the observer to view the world in a different light."