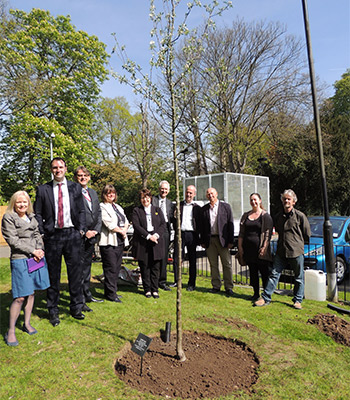 The sun shone, friends and colleagues gathered and the new crab apple tree blossomed for its planting in memory of former lecturer Cynthia Jones at Kingston Hill campus just before Easter. Cynthia, former lecturer in the School of Education, died on 14 September 2012, tragically close to her recent retirement after a career of nearly 40 years at the University.

As Cynthia's husband Rob Donnelly fed and watered the Malus 'John Downie', he commented the "genius" of selecting the crab apple tree.

"The RHS describe it as 'decorative, fragrant and attractive with white blossom in spring, green coppery leaves in summer and scarlet apples in the autumn' – the three colours making those of the national flag of Wales! In addition, the crab apple is a rare natural host to mistletoe (one of the sacred plants to druids along with the Sessile oak), plus the Celts also identify it as the symbol of love, marriage and fertility – what could be better?"

A plaque made from Welsh slate provided the finishing touch.

Rob added that the family were grateful to the Vice-Chancellor Julius Weinberg, Cynthia's former colleagues, head of School of Education Andy Hudson, Rachel Burgess and Sustainability Hub director Victoria Hands for their support in commemorating Cynthia's contribution at Kingston. "Cynthia had a particularly fond regard for the Kingston Hill site and in her first years there – after teaching on Saturday mornings (yes, back then) – we would often stroll around the grounds and enjoy the beautiful trees and plants."

Andy Hudson joined Rob in speaking of his memories of Cynthia, reminding people of her lifetime's commitment to Kingston University, from her arrival in the then Faculty of Education in 1974. After her death in 2012, he described Cynthia as "a combative and lively spirit, a fine educationalist and a great innovator", adding that "she gave a lifetime career commitment to Kingston University and to education, and we remember her most fondly."

Cynthia's first degree in Wales was in psychology (1971) and she gained her MPhil in Social Psychology at Bedford College (1974). She was a fellow of the British Psychological Society, active in the British Educational Research Association and a Chartered Psychologist. Her early work was in child development, teaching courses across education and social work, and writing and researching in this area. 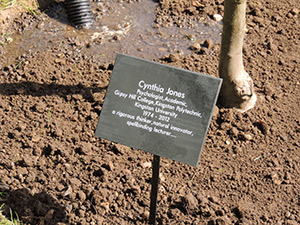 Cynthia pioneered one of Kingston's first distance learning programmes with the Hornsby International Dyslexia Foundation, drawing candidates from around the world. She pushed on with programmes co-taught with Surrey Children's Services for teachers, working with children with special educational needs, and contributing to increasing involvement from serving teachers in part-time masters degrees. Latterly, she led on mentoring and appraisal within the School, pursuing these roles with sensitivity and skill. Throughout her career, Cynthia was an enthusiast for European collaboration.

She is survived by her husband Rob, son Tom and daughter Alys.