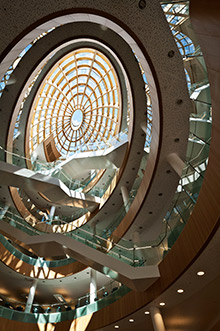 "Few of us are privileged enough to visit the vast array of new and historic buildings around the world. This means for most people that the experience of the built world, outside our own locale, is via the photographic image," says Richard. "As a photo agency, we have been working with images of architecture and the built world for 30 years, disseminating images of architecture, beyond the architectural press. We give people access to places and spaces they may never visit. The photograph is a gateway to the architecture."

The awards are seen and judged by the most knowledgeable, creative and influential people within the global architectural and design community. To win, or be a runner up is genuine recognition. For the awards to have been judged by architects such as Zaha Hadid, Lord Richard Rogers, architectural luminaries such as James Russell from Bloombergs and Cathy Slessor of the Architectural Review, is indeed a privilege. It illustrates the importance of the Award to the architectural and photographic communities.

Entry to the awards is open until midnight on Monday 30 June with the following four categories to enter.