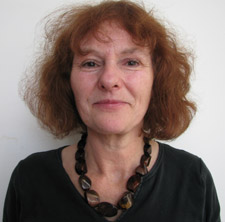 An extraordinary collection of art works by refugees from the holocaust, held captive by British authorities during World War Two, has gone on display on the Isle of Man. The exhibition includes work by Ernst Eisenmayer, who was brought back to public attention by Professor Fran Lloyd from Kingston University in London.

Professor Lloyd, Associate Dean and Professor of Art History at Kingston, said the collection marked the 70th anniversary of the establishment of internment camps on the Isle of Man. "This is the largest exhibition so far that has brought the art of the internees back together," she said. "No one has ever done anything before that has looked at the richness of the art they produced."

At the launch of the exhibition at the Sayle Gallery in Douglas, Professor Lloyd read an extract from Eisenmayer's account  of his time on the island. Of all the artists whose work is on display, he is the only one still alive. Eisenmayer will celebrate his 90th birthday in September and recalled his experience of British captivity in the recently written account sent to Professor Lloyd. It proved the perfect way to mark the start of the exhibition, she said. The account forms a sequel to his earlier filmed interview with her in which he talked about being sent to Dachau concentration camp. The 30 minute film interview is being shown at The Sayle Gallery and on the Liverpool to Douglas ferry for the duration of the exhibition.

Eisenmayer was interned when he was 19 for a little more than a year. During the war, Britain held German, Austrian and Italian citizens in internment camps fearing that they could pose a risk to the country. "In fact," Professor Lloyd explained, "many of the 27,000 'enemy aliens' held were, like Eisenmayer, refugees who had come to Britain after fleeing from the Nazis." 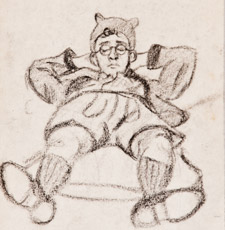 In his account, the artist said that after being held in Dachau, captivity in British hands was "at times, a bit of a lark". He spent time in several camps on the Isle of Man, as well as in Devon and Shropshire. He recalls trips to the cinema ("The only good film I remember is Charlie Chaplin's 'The Great Dictator'") and setting up football matches, a choir and even a 'university' in the camp. Many artists were interned and they had to use their imagination to find materials. "Early on they were held in boarding houses," Professor Lloyd said. "They would use the wallpaper or toilet tissue to sketch on and there were blacked out windows that they could literally etch on."

The new account shows Eisenmayer has warm recollections of the island, relishing the rough ferry trip and describing his final months in internment, when he was living in a terrace house at Onchan Camp, as "a splendid summer". "I don't go along with the presentation by some artists of the clichéd barbed wire representing this or any other camp," he said. "We were bloody lucky on the Isle of Man, unlike the millions in German concentration camps." 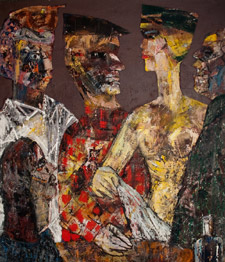 The exhibition, 'Forced Journeys', includes the work of 36 artists who were held at ten different camps on the Isle of Man. The best known artist is Kurt Schwitters, whose work was declared 'degenerate' by the Nazis at an infamous exhibition in Munich in 1937. Other internees included painter Martin Bloch, film animator Kurt Weiler and Norbert Brainin, later leader of the Amadeus String Quartet. Eisenmayer recalled that after smuggling a violin into the Prees Heath camp in Shropshire, Brainin performed Schubert's "Rosamund Overture" for his fellow internees.

After the war, Eisenmayer made his name as a painter and sculptor but left to live in Italy in 1975. He was then largely forgotten by the British art audience until being 'reintroduced' by Professor Lloyd, whose son had become friends with the artist's grandson. Eisenmayer met Professor Lloyd in 2008 and recounted to her his repeated attempts to escape from Nazi-occupied Austria, which led to him being sent to Dachau. Professor Lloyd is currently working on what is expected to be the largest exhibition of Eisenmayer's work to date.