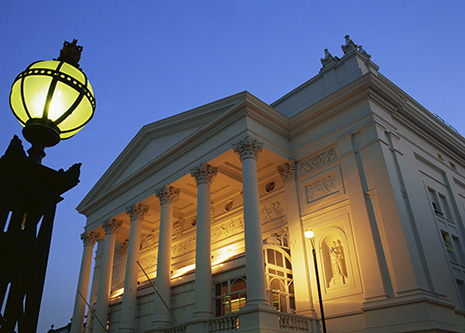 Thousands of opera aficionados around the globe are set to tune in to six short films created by Kingston University illustration and animation students this summer. The films, inspired by La traviata and La bohème, have been produced as part of a collaboration with the Royal Opera House.

The prestigious venue set 13 final year students the challenge of creating animations based on the famous productions as part of its BP Big Screens project. After six months' intense work, the students' visual interpretations are now being uploaded on the Royal Opera House's YouTube channel.

The up and coming animators are also crossing their fingers that their films might be chosen to be among a select few shown during the Royal Opera House's BP Big Screens events. These will see both operas broadcast live from the Royal Opera's iconic Covent Garden stage to up to 15 locations across the United Kingdom, including London's Trafalgar Square, Castle Square in Swansea and the Millennium Square in Leeds. A performance of La traviata on May 20 also marked the first time a full opera was available for music lovers around the world to watch live and free of charge on the famous auditorium's website. La bohème is set to reach a global audience in the same way in July.

Kingston University students Ellie Pritchard, Alice Stewart and Luisa Crosbie, all 22, who worked together to bring the story of La traviata to a 21st Century audience, were the first to have their short film posted on the Royal Opera House YouTube channel. Shot from beneath a computer desk, it shows protagonist Alfredo typing a series of messages on his keyboard and mobile phone to arrange a meeting with the love of his life, Violetta. It goes on to chronicle the frustrations he experiences while waiting for her response. "We wanted to explain the context of this opera to a younger audience and, after we discovered that these days one in five relationships begins online, we decided to use screen-based interactions to communicate part of the story," Ellie explained. "It was a difficult film to make due to the camera angle but we're really happy with the finished product and very excited that it's likely to be watched by so many people." 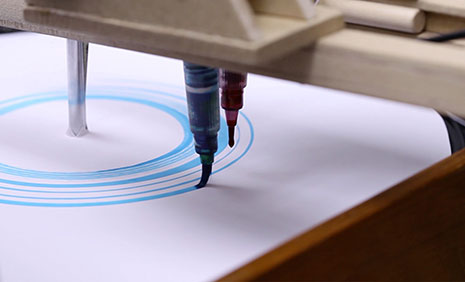 The second film in the series, called The Opera Machine, was created by 22-year-old Doug Hindson who wanted to find a visual way to portray the sound of an opera performance. He ended up constructing a device, similar to children's drawing toy Spirograph, which sat on top of a rotating record player. "It tracked slowly across a piece of paper on the turntable while two ink brushes translated the vocals to spiralling lines of varying widths," he explained.

The most demanding aspect of the project had been working out the mechanics of the device, Doug added. "I had no experience of robotics or engineering so, eventually, I turned to Lego to help me create the machine," he explained. "It worked brilliantly and O Soave Fanciulla from La bohème was the perfect track as the male and female vocals could each be assigned a different brush. My hope is that this project helps create a better appreciation of opera among people like me who have never really experienced it before."

Minhee Cho, 30, and Estelle Woo, 22, were the duo behind the third animation to appear on the Royal Opera House channel. Their film was based on the Brindisi drinking song from La traviata and shows Alfredo strolling through the colourful world of Violetta's hair - representing his feelings towards his lover. 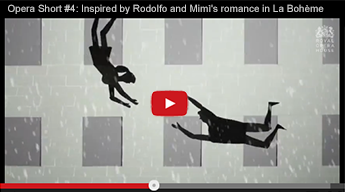 Michael Parkin, 27, Ed Byrne, 24, and Jacob Read, 22, have also seen their film posted online. Based on La bohème, the animation focuses on the immediacy of the love between the opera's two main characters, Rodolfo and Mimi, as seen through the eyes of a window cleaner who saves a falling woman and is then transported with her to another world.

The final two student films to feature on the Royal Opera House website include 22-year-old Gus Scott and 23-year-old Sam Stobart's piece inspired by the ‘sound showers' installed at Norway's Oslo airport, where people can stand under a speaker to escape the bustle of the busy terminal. Alice Cui, 22, and 23-year old Dahye Kim complete the group who worked on the project. Their short film depicts the opera characters' silhouettes as sound waves.

Associate professor Geoff Grandfield, course director for Kingston's BA(Hons) Illustration Animation degree, said the Royal Opera House had approached the University last September after being impressed by films created by students for Channel 4 television series Random Acts. "Having their animations watched by people around the world through the Royal Opera House collaboration will be an absolutely fantastic showcase for our students," Mr Grandfield said. "To be able to demonstrate work produced for such a high-profile client before they even graduate will be invaluable for them. They have carried out this project on top of their other course work and their enthusiasm and dedication has been outstanding."

The Royal Opera House's associate director of opera, John Fulljames, said he had been fascinated by the creative process that had taken place as the students' animations took shape. "Some of the films are about a specific opera while others are more generally about the art form, but they all exude a refreshing and playful enthusiasm for opera's potential to tell transformative stories," he said.