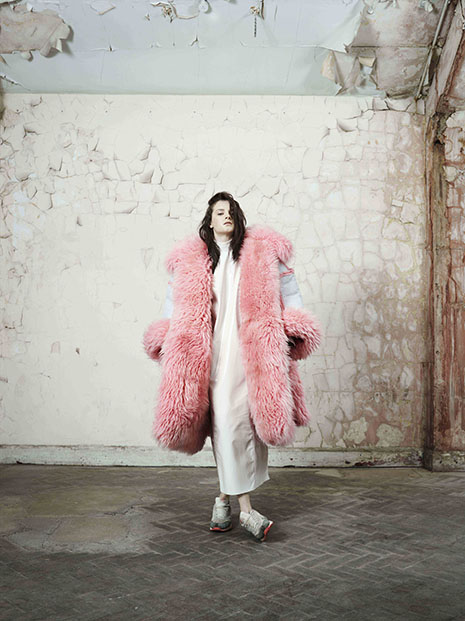 A Kingston University student's adventurous new womenswear range inspired by the expeditions of an early Antarctic explorer has caught the eye of a firm headed by one of the world's leading fashion lensmen and major national newspaper The Times.

British photographer Rankin, who lists iconic images of the Queen, Kate Moss and Madonna amongst his array of high-profile work, sent his top assistant, Trisha Ward, to capture a pink sheepskin coat created by Lauren Lake during a special Graduate Fashion Week shoot. "To have such a talented photographer who works alongside someone of Rankin's stature take images of one of my statement pieces was incredibly exciting," Lauren,who grew up in Exmouth, Devon, said. "I couldn't quite believe it when I found out and felt a huge surge of pride when I saw the final result. The photos depicted the bold, daring qualities of my collection absolutely brilliantly."

Lauren's work, which was shortlisted for Graduate Fashion Week's coveted womenswear award, also set camera shutters whirring at the event's gala awards ceremony, creating such a high level of interest that it ended up featured on the front page of the Times.

Inspired by her own wintertime exploits on the ski slopes, the 22 year old completed the six looks in the collection after embarking on an extensive research expedition mapping the life and times of early 20th Century explorer Robert Falcon Scott and his team on their trips to Antarctica. In a nod to the hardships they endured, the garments rely heavily on the leather and sheepskin fabrics and layering usually more the domain of intrepid individuals trekking across snow-covered landscapes.

As well as the reversible pink sheepskin coat creating such a stir in fashion circles, Lauren's pioneering collection boasts an ice white leather jacket and a wintry metallic top complete with built-in oversized mittens. Her aim was to appeal to young female fashion-lovers who might also regard themselves as slightly eccentric. "I started my research in the modern day by looking at the clothes I've relied on during my own skiing holidays before comparing them to items worn over the past 125 years and just fell in love with the garments that were a mainstay of Captain Scott's expeditions," Lauren explained. "I looked at as many pictures as I could find of his party and have drawn on most of the key aspects. There are no shapes or fittings in this collection – it's all oversized and extravagant. I also picked pink asa dominant colour because I wanted my work to really stand out from the crowd." 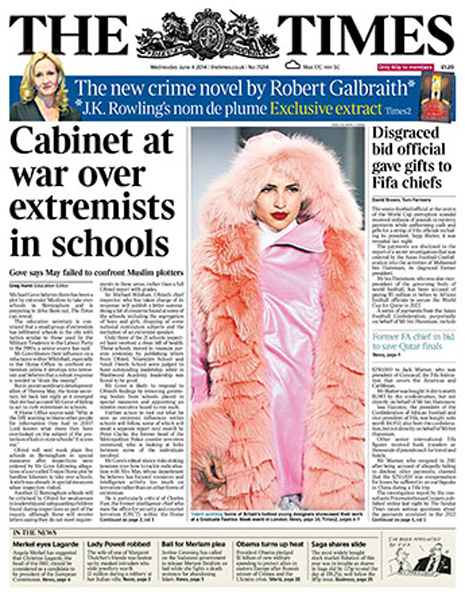 Lauren, who has already notched up high-level industry experience working at leading label Banana Republic's New York headquarters during her Kingston studies, can track her fascination with fashion back to an early age. "I've always liked to draw and, when I was a little girl growing up in Devon, I used to sketch dresses which my mum, Jane, would then make for me," she said. "My aunt, Pearl, who passed away several years ago, also used to own a fabric store in Exmouth, so for most of my life I've been around all sorts of different types of materials. Deciding to go to University to complete a fashion degree seemed the most natural thing in the world to me and I've loved immersing myself in the creative process ever since."

Senior fashion lecturer Andrew Ibi said Lauren had exhibited enormous all-round talent during her Kingston University BA(Hons) Fashion studies. "Lauren has been diligent with both her approach and research to develop texture, colour and the visual direction of her final collection," Mr Ibi said. "She's brought a playful sophistication to her work and has successfully combined that with excellent cut, detail and fashion awareness."

Lauren lists creating her polar collection as the highlight of her three-year degree. "I owe so much to my Kingston University lecturers who have given me the freedom to express myself in my collections but also given me the grounding that's so vital to design for the commercial world," she added.

Rising through the fashion world to become creative director of an established brand is now firmly at the pinnacle of Lauren's career ambitions. "But, for now, I'm focused on continuing to learn and grow while working within the industry to become an established designer," she said.

Lauren was one of 21 Kingston University students who unveiled their latest collections on this year's Graduate Fashion Week catwalk at The Old Truman Brewery.