Watch out - the Mulch Men are coming 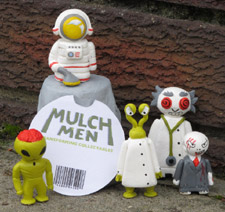 Remember Transformers, Furbies, Go-go's Crazy Bones and Beanie Babies? The latest must-have children's toy could well be Mulch Men, wild-eyed characters made of a biodegradable plastic. A Kingston University undergraduate has found a way of making these curious creatures change their appearance - and then, eventually, turn into compost which can be used in the garden.

The Mulch Men will be meeting fans at Kingston University's Faculty of Art, Design and Architecture's Undergraduate Degree Show from 6th to 11th June. The figurines, designed by 24 year old Arran Evans, will be on display alongside a host of imaginative ideas from the Faculty which encompasses animation, film making, interior and exterior design, photography and surveying.

"I found that a lot of toys contain a whole variety of chemicals and there's no way parents can find out what's in them," Arran, who has found a way of manufacturing the Mulch Men using a plastic derived from potato starch, explained. "I wanted to design something for boys aged between eight and twelve. At that age, they love colourful plastic toys that they get stuck into and have fun with." 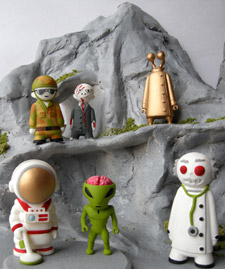 Arran hopes boys will fall for the twenty five figurines and said they would also be able to buy a 'landscape' for the mulch men to live in. Once the initial novelty had worn off, the children could bury their Mulch Men in damp soil and within two weeks they would have changed appearance. "The space man turns into an alien, the solider becomes a zombie and the mad scientist mutates into a goblin", Arran explained.

And finally, rather than disappearing into a box in the attic, the Mulch Men could simply be thrown away on a compost heap, she said.

Originally from the Dublin suburb of Monkstown, Arran is in the third year of her Product and Furniture Design degree.

This year the range of ideas includes an algae cultivator capable of providing a family with 25% of its food, a set of designs for furniture which would be manufactured by autistic craftsmen and a new form of soundproofing for musicians. 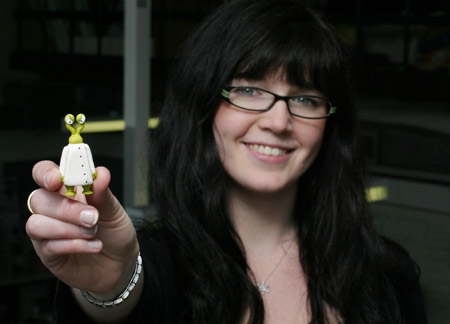