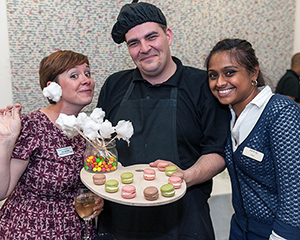 The event was held under the glass roof of the Dame Elizabeth Esteve-Coll Learning Resources Centre.

Hosted by Vice-Chancellor Julius Weinberg, the annual occasion celebrates our partnership with Kingston town by inviting members of the local community on to our campuses. Work by students was on display and the Estates team were on hand to show off the University's ambitious plans to replace the Town House.

Robert O'Dowd, chief executive of Rose Theatre Kingston, said it was a great opportunity to bring people in to the University. "People don't always appreciate that there is a world-class university in Kingston," he said. 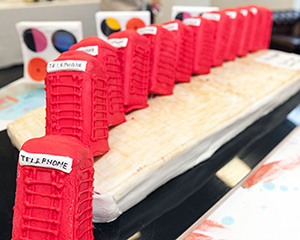 In his opening remarks, Julius stressed the University's links with the wider community and the benefits to our students of living in such a vibrant area – one that is also recognised as London's safest borough. "We strongly believe that Kingston University should be a civic university," he said, adding that the University is also a strong contributor to the local economy, bringing in around half a billion pounds a year.

Elaine Miller from the campaign group Love Kingston believes the University contributes significantly to the community. "The reception is an ideal forum to showcase your achievements and future plans to influential groups working in the borough, while letting us meet students and faculty members," she said.

Event organiser Kate Jennings said it is important to rotate the event around the campuses and this year they were able to highlight work by final year photography students and the History of Art School, courtesy of Robert Knifton.

"Thanks also to Elior and KUSCo," she added. "Our brief to the caterers Elior was to come up with something creative and what they came up with was exceptional! The cake and its falling telephone boxes was the centre piece and a perfect talking point."

Thanks also to all those staff and students who attended the event and helped to entertain our guests.

The evening was a great success - hopefully the pictures will speak for themselves!