The first half of 2014 has been a bit of a whirlwind for budding film-maker Scott Carthy. "I've barely had time to think," the 22 year old, who is originally from Drogheda, Ireland, admitted. On top of completing the final year of his graphic design degree at Kingston University London, Scott has found the time to shoot and edit the seven-minute film 1050.6(c) which tells the story of the dying art of subway dancing in New York City.

The movie takes its name from section 1050.6(c) of the New York City Transit Rules of Conduct, which prohibits performers from dancing within the subway cars. This local law has been largely ignored till now but will shortly be more stringently enforced. The film has therefore come at a pivotal moment for the dancers, documenting as it does the end of something that will change part of the character of one of the world's most famous cities.

Scott's interest in the topic was initially piqued in September of last year when he chanced upon a poorly lit, low-quality YouTube video of the performers in action. Unlike New York's rush-hour commuters, who sometimes looked upon the dancers as an unwelcome nuisance, Scott said he had been entranced by the unique artistry and talent of the performers. "Being from outside of the United States perhaps allowed me to see the dancers in a new light," he added. "I thought to myself, if I can capture these guys with a high-quality camera, I could make something intriguing that might spark people's interest. The challenge was that it was all taking place in New York and, at the time, I was a cash-strapped student based in the UK."

Undeterred by the distance, and having begged and borrowed from friends and family to fund the trip, Scott touched down in the Big Apple in March 2014, six-months after seeing the dancers for the first time. Getting the film off the ground had presented some unique challenges, he explained. "I wasn't actually in New York to shoot the movie - the main reason I was there was to complete a graphics project as part of my degree, which consumed most of my time, so I had to fit filming around that," he said. "In fact, the whole trip was made possible by friends putting me up and my parents giving me their discounted staff plane tickets." 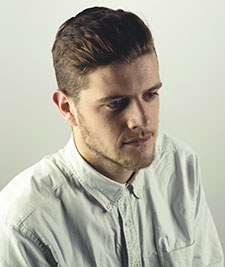 Scott grabbed the opportunity to go and film the performers. He rented a high quality lens from nearby photography store, which he used with his Canon EOS 7D SLR camera and a stabiliser, and set about scanning the New York streets for some willing subjects. "I met the two dancers in the film, Shariffe and Junior, inside 34th Street Station, a location where they'd often perform for tourists and passers-by. They were initially wary about what I wanted to do, so I shot a short clip of them in action, added some music, and went back the next day to show them the results," Scott said. Excited by Scott's footage, Shariffe and Junior agreed to spend the next ten hours with Scott and his camera. "I followed them on to rooftops, in to trains and filmed them in the street," he recalled. "It was fascinating. The equipment allowed me to follow the dancers' movements on the trains, which helped to make the shots appear very natural."

Scott said it was not until returning to Britain to edit the film that he realised the extent of the dancers' plight. New York Police Commissioner Bill Bratton has pledged to clamp down on subway dancing as part of his 'broken windows' policing strategy which makes small but conspicuous crimes, such as unauthorised public performances, subject to more stringent regulation. "I had to be really careful, especially as filming in the subway carriages is in itself an offence," Scott said. "I didn't want to go out there and cause trouble." Nonetheless, he remains determined to find a way to return to shoot a feature-length version of the movie and, to that end, has set-up a Kickstarter public fundraising campaign to get the project in motion. "I want to film these amazing performers now because this could be the last chance to record this art form," he added. "If no one else does it, it will be gone." 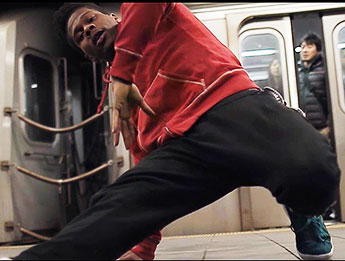 Scott's film-making ambitions now stretch beyond 1050.6(c). "I want to tell stories, but film is more than just narrative, it provides unique visual opportunities," he explained. "Being at Kingston has really helped me discover myself as an artist and I've been encouraged to pursue my creative interests even when they are outside the boundaries of my course. The projects that I've been able to be involved in have also made the prospect of becoming a professional film-maker feel less like a distant dream."

Senior lecturer in photography at Kingston University Paul Jenkins said he was pleased to have been able to play a part in helping to nurture Scott's talents. "Scott has made something special with this film," he said. "He has the ability to communicate in a very direct way and 1050.6(c) really illustrates this skill." Scott had always been a dedicated and talented student who hadn't known the meaning of the word 'no', Mr Jenkins added. "The graphic design and photography courses at Kingston encourage students to experiment with their work, and Scott's enthusiasm meant that he was always willing to try something new. He really can go wherever he wants to in the future - anything is possible."

Scott is due to begin an internship at prestigious New York design firm Sagmeister & Walsh in December and aims to venture further into the world of film before returning to the United States.