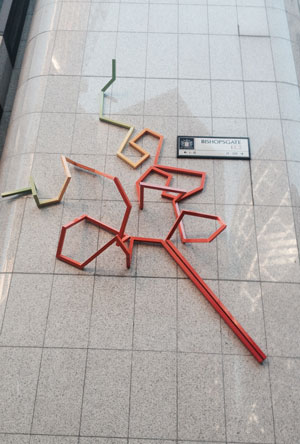 Julian Wild has recently been featured in Intelligent Life Magazine – we caught up with him to see how he has been getting on.

Julian graduated in Fine Art (1995) and since then has been shortlisted for the Jerwood Sculpture Prize in 2005, won the Millfield Sculpture Prize, and was awarded the Royal Borough of Kensington and Chelsea Arts Club Trust three-year studio bursary. He has also exhibited at Modern Art Oxford, Maddox Arts, The Fine Art Society, V22 and The Saatchi Gallery amongst others.

When talking about what inspired him to choose sculpture as his art form, Julian revealed that he has always wavered between painting and sculpture: "That is why a lot of the 3D work I make has a relationship to 2D. This comes across in the way I use line and color in my installations and sculptures. In fact I originally wanted to be a painter, but when I got to Art College I discovered the sculpture department and it captured my imagination."

Julian is extremely versatile with the materials he uses and the scale in which his works are created. He says: "I don't really have a favorite material; I tend to work obsessively with one material at a time and then move onto another."

Julian is currently working with metals; stainless steel and bronze, which need to be welded, polished and painted. "When I studied at Kingston, we were encouraged to really understand the material that you are working with. So I take that notion with me when I make a piece of sculpture."

In previous interviews, Julian has stated that his sculptures are just his doodles, but in 3D!

Talking about the inspiration behind his work Julian said: "I suppose nothing is entirely abstract. We always try to find something recognizable in what we are looking at whether it a Rothko painting or a cloud formation. My work is abstracted. I make man-made versions of natural structures. Although it's very broad, I am inspired by nature and the seasonal changes that I witness around my house and studio in Sussex. Engineering and architectural detailing also inspires me. My work is about bringing these two areas together and looking at how they relate."

Art remains at the forefront of Julian's work, but the production isn't all he is involved with. ForumArts is an organisation that offers opportunities for artists and support after college. It is free to join and he welcomes recent graduates from  Kingston to join this network.

Speaking of his fondest memories of Kingston, Julian recalls his time in the Knights Park bar, doing his work, making friends and meeting his wife Mary Grant. Julian and Mary make up one of the 381 Kingston couples that we know of. Mary has continued to paint since graduating in Fine Art in 1994 and her works can be seen at www.marygrant.co.uk

Julian is now preparing to exhibit his work at two shows; a group show with CASS Sculpture Foundation and Sotheby's at Chatsworth House and a solo show at William Bennington Gallery in London, both opening on 5 September.

Finally, we asked Julian for a few words of wisdom for those in the art industry: "It's not necessarily always an easy ride being an artist as it's such an uncertain career. But what you lack in certainty you gain in freedom. I get to do what I want and I have the opportunity to meet interesting people and to show my work in extraordinary places."