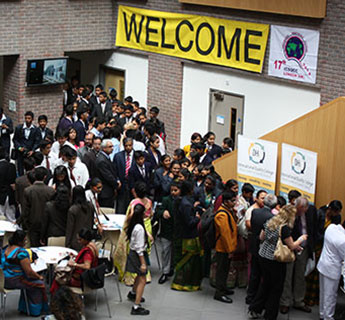 One of the world's leading educationalists visited Kingston University's Kingston Hill campus recently as the University became the first British venue to play host to the International Student Quality Circles Convention. Dr Jagdish Ghandi, who established the world's biggest school, the City Montessori School in Lucknow, India, which teaches mor ethan 45,000 students is the leader of the quality circles movement in education. He attended the Convention with a group of his pupils, who joined students from Pakistan, Bangladesh, Mauritius and several other nations. Dr Ghandi's educational philosophy is adapted from the principles of continuous improvement through consultation which were used to regenerate the shattered Japanese economy in the aftermath of World War 2. "Quality improvement is a concept of mind - you always need to be thinking ‘how can I do better?'" he explained.

Dr Ghandi said the way Japanese products went from being a by-word for shoddy goods to market leaders inspired him to adapt the principles for education. "The quality circle system is about changing mindsets - people from the highest management to the lowest worker sit down in a circle and everyone's on an equal level," he said. "It's a consultative process that has become a way of life, so I thought why not encourage this approach in children? If you catch them early, you can make that change and set about producing a total quality person." 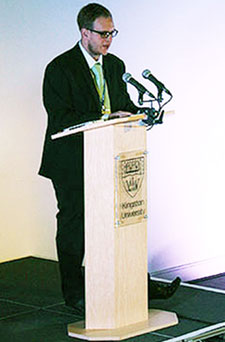 isitors to the conference, which was convened by former Kingston University student union vice president Chris Ford - a frequent delegate at previous conventions - heard from a number of guest speakers. These inclued 1984 Olympic gold medal winning rower Martin Cross who spoke about the importance of aspiration and self-improvement as a way of advancing in life.

Emeritus professor of the Kingston University Business School Richard Ennals, who has been involved with the quality circles movement for more than 20 years, said that the way the Kingston convention had been run had been a perfect example of the system in action. "The starting point in education or industry is not to just tell people what to do but to involve them and respect their intelligence. Companies that think they can survive without doing that, don't last," he said. "This approach is all about empowering them to take the lead, and that's what's happened here. Chris designed and run this event but I've been there to provide support to enable him to carry his ideas through."

The software to run the event was designed by two more of Professor Ennals's students, Jack Holmes and Waqas Ahmad. Having just graduated with a business information technology degree, Jack said his own experience of being involved with quality circles had made a big impact on his time at Kingston - and he expected it to continue beyond. "It makes you aware that even as a junior person not involved in management, you can make a difference to how things are run in an organisation," he explained. "You need someone who's brave enough to start it, but once people see change, that gives them the willpower and confidence to come forward and promote their ideas. If in the future I feel like I'm being badly managed, what I have learned through quality circles will give me the confidence to speak out."

Waqas said the system provided a dynamic and responsive way of addressing the need for change and making sure things happened sooner rather than later. "Usually at the end of the year, you're asked to fill in a feedback form with the intent of things being changed the following year," he added. "Using quality circles, though, allowed us to identify processes that we thought could be improved now, not just for future students." 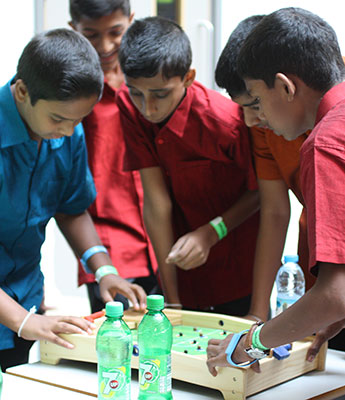 Following five packed days of activities under the banner of ‘Empowering responsible citizens', including competitions and projects the students enjoyed a day sight-seeing in London before returning home. Chris Ford said that the feedback he had received had been extremely positive, suggesting that the year spent organising and preparing for the conference had paid off. "We wanted to make sure that this convention was truly student-centred," he said. "We had separate activities for teachers and for students and they all had their own rooms on campus which the students said made them feel like VIPs. "Many delegates had told him that just being in the United Kingdom had been a real opportunity, as immigration rules made it so hard to get into the country.

Chris said he was hopeful that some of the students who attended the convention might be back at the University again in the future on a more long-term basis. "We've already received a few requests for prospectuses and anyone who attended the convention has been offered a 10 per cent discount on their tuition fees, which is a huge deal for people coming from abroad," he said. "I feel proud that we were able to give all those students from around the globe the opportunity to come to a British university. The convention firmly put Kingston on the world map within the quality circles movement."