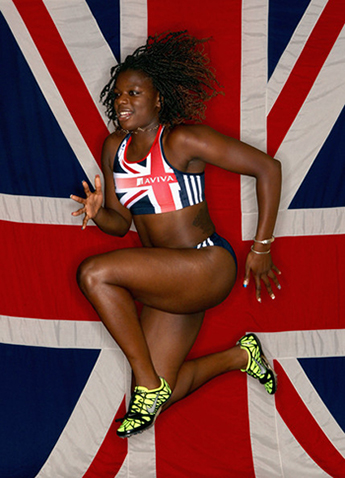 This season, Asha Philip, Kingston University graduate (drama, 2012), has achieved what most athletes dream of by being selected to race at the Commonwealth Games and European Championships.

Asha started the season by being crowned national champion over 100m, making her the fastest woman in the UK. She then finished fourth in the 100m in the Commonwealth Games in a new personal best of 11.18 seconds, before capping off the season by winning gold at the European Championships in the 4x100m relay and setting a new national record in the process.

"It feels great to be finally getting these results", beamed Asha. "I've come a long way and had to deal with a lot over the years with injury in particular. My time at Kingston Uni really helped me, especially Ricky James, my strength and conditioning coach in the Fitness Centre, who trained me whilst I was there; I owe him a lot. My drama lecturers were fantastic too, helping me fit to my timetable around my racing and travelling. Being on the University's sports performance programme was also helpful."

Asha went on to explain the secrets behind her success, "You've got to be organised and have a plan. At Kingston I set out my days and weeks; when I could train and when I needed to study." When asked for her advice to aspiring Kingston athletes she says, "Be totally committed to your course. Don't go to every party and every birthday celebration; your friends will understand, I promise. For me uni came first. I still miss Kingston as I had such a great time there!"

Asha's goals for 2015 include competing at the World Championships in China before, hopefully, going on to compete at the 2016 Olympic Games in Brazil. "I've learnt a lot this year about myself and the sport. I've had a great year but I did come into it injury free which made a huge difference."

As Asha prepares for the World Championships she is positive about the future, "All being well I will double up next year and race in both the 100m and the 200m. Who's my competition? All the sprinters from the Caribbean, America, Nigeria and Holland."