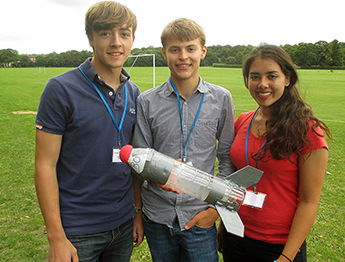 Fifty school pupils from across the United Kingdom have completed a week-long residential course at Kingston University to find out more about the range of technology currently used in aviation and get a glimpse of possible future developments for the next generation of aircraft.

The aerospace engineering course, organised by The Smallpeice Trust, gave the 15 and 16 year olds a chance to learn about the basics of aircraft flight, the principles of lightweight structural design and the need for highly efficient propulsion systems. It was staged as part of the charity's ongoing programme of residential courses to help students aged 12 to 18 learn and develop skills in engineering, design, technology and manufacturing.

Working in small teams, the pupils took part in activities ranging from material testing and flight dynamics to rocket propulsion and wind tunnel analysis. They were also tasked with designing and making rocket-powered aircraft models, competing with each other to see which glided the furthest after launch.

During their time on campus, the students learned about the characteristics of new aircraft designs in the University's state-of-the-art flight simulator and toured facilities, including its Learjet hangar. They also made the most of the opportunity to learn about how flight works outside of the atmosphere in a session run by Britain's first astronaut, Dr Helen Sharman, who now holds a senior post at Kingston University.

Esha Mistry, 16, from Archbishop Temple School, was enthusiastic about what she had learned during the week. "I've been given a fabulous insight into the world of aerospace engineering and been fortunate to experience student life," she said.

Head of the School of Aerospace and Aircraft Engineering, Dr Peter Barrington, said it was the first time the University had hosted a Smallpeice course and academic staff and student helpers involved had really enjoyed the experience. "The enthusiasm of the participants was infectious and they came up with some impressive rocket designs," he added.

"Our courses focus on informing students about the breadth of engineering career opportunities open to them and it has been really positive to see such focus and enthusiasm from these budding engineers during the Kingston University course," Claire Fisher, marketing officer for The Smallpeice Trust, said.