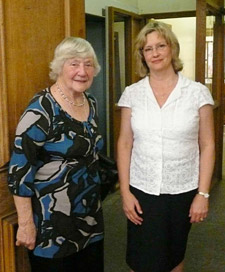 A Kingston University lecturer has described the number of female MPs elected at the general election three weeks ago as "deeply disappointing". Dr Nicola Phillips, a lecturer in gender history, said that more than 90 years after Viscountess Nancy Astor became the first woman to take a seat in the House of Commons, MPs were still disproportionately male.

"I was horrified to find that the UK is now 73rd in a worldwide list of the percentage of women politicians. I strongly believe that we should have more women MPs," she said. Women make up just 142 out of 649 (22 per cent) of MPs and only four members of the coalition Cabinet are female - one of whom is unpaid.

The issue was top of the agenda when Dr Phillips hosted a debate on women and politics with former Cabinet minister Baroness Shirley Williams on Thursday 27 May at 7:30pm in The Library Room, Old Town Hall, Richmond. Topics for discussion included how far women in politics have progressed in the last century, whether female politicians make any difference and how women's representation could be improved.

The event accompanies an exhibition entitled 'How The Vote Was Won' which is at the Museum of Richmond until 4 September. The exhibition celebrates artists and writers who were part of the suffrage movement as well as local people who were involved in the campaign for women's votes. One prominent campaigner was Princess Sofia Singh who was a member of the Kingston and Richmond branches of the Women's Social and Political Union, the women's rights group founded by Emmeline Pankhurst. A photograph in the exhibition shows Sofia, born in Norfolk to an exiled Indian Sikh Maharajah, selling copies of 'The Suffragette' newsletter outside Hampton Court Palace in 1913.

In spite of what some may see as slow progress since the days of the suffragettes, Dr Phillips urged campaigners to take a more positive view. She said that even the early campaigners realised that their achievements were only the first step on a long road. "When women got the vote for the first time, the newspapers were woefully patronising about whether women would know how to use the ballot box and whether they would have to ask a male relative which party to vote for," said Dr Phillips. "There are still inequalities in terms of representation and issues like equal pay but I would urge women not to be disillusioned - women's votes count and women in politics can make a difference."

Dr Phillips also said the campaign for a better gender balance in politics should not be seen as anti-men; even the early Edwardian campaign had some prominent male supporters. "Feminist history can present it as a battle of the sexes but we should acknowledge that male supporters have helped women to achieve greater equality. It's not just about getting women into parliament; it's about getting the kind of legislation that pushes women's issues." She said she was "thrilled" that Theresa May had been appointed to the influential role of Home Secretary but would be interested to see how much time she had spare to devote to her other role as minister for women and equalities.

More information about the exhibition and tickets for the talk are available from the Museum of Richmond on 020 8332 1141 or www.museumofrichmond.com, or Aurora Metro Arts and Media on info@aurorametro.com or 020 3261 0000.

Baroness Williams of Crosby was one of the 'Gang of Four' who left the Labour Party to form a new political party, the Social Democratic Party - which later merged with the Liberal Party to form the Liberal Democrats. She became an MP in 1964 and served as a minister in the Harold Wilson and Jim Callaghan governments of the 1960s and 1970s. She became a peer in 1993.