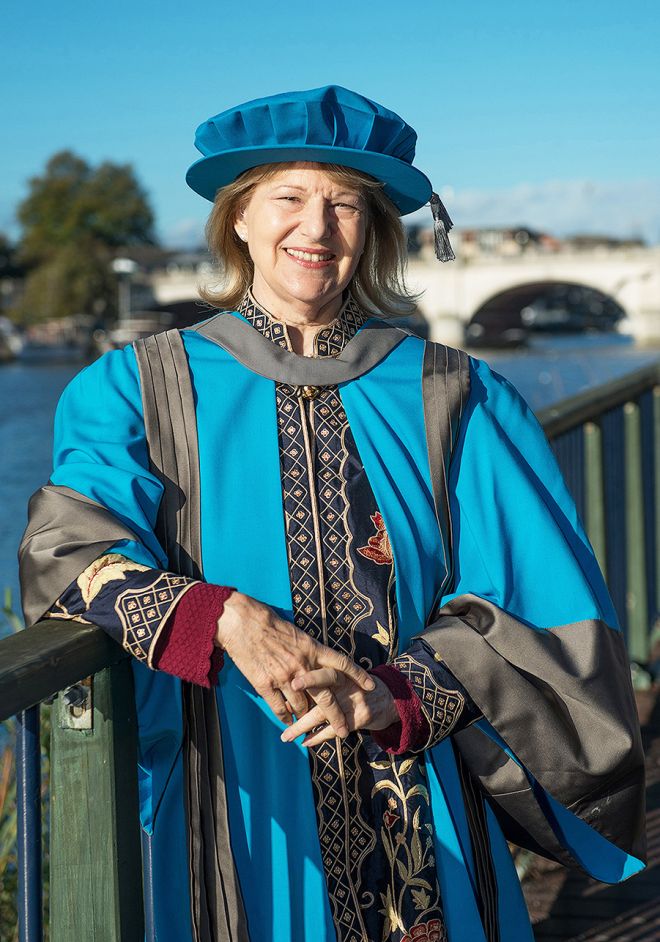 Baroness Nicholson received an Honorary Doctorate of Letters in recognition of her outstanding contribution to international relations and human rights, particularly those of women in post-conflict and oppressed societies.Iraq will win the battle against Islamic State fighters because of its enduring traditions and founding principles as a nation, the Prime Minister's Trade Envoy to the country Baroness Emma Nicholson of Winterbourne has predicted.

The former Liberal Democrat MP and member of the European Parliament was speaking ahead of receiving an Honorary Doctorate of Letters from Kingston University's Faculty of Business and Law last week, awarded in recognition of her work in international relations and human rights - much of which has been carried out in post-conflict areas such as Iraq and Afghanistan.

Islamic State was not a short-term, freak occurrence, Baroness Nicholson insisted. "It reflects the ugly battle of totalitarianism buttressed by extreme cruelty and dressed up in false religious symbolism to frighten the nervous," she said. "Iraq will get rid of IS from her territory because historically the country has functioned as a multi-religious state and with a system which incorporates the separation of powers."

Through her work in Iraq and Afghanistan, Baroness Nicholson said she had received a rare insight in to the two countries arguably most significant in shaping the international political agenda since the turn of the century. "The internal affairs of these two countries have become part of everyday life in Britain as a result of the armed forces' missions there," she added.

Whilst public opinion in Britain might be divided over the justification of the coalition's presence and the price that had been paid, Baroness Nicholson said it had definitely been the right thing to do provided the benefits brought about so far were followed up on. "The work of Britain and the United States, together with their main coalition partners, has brought access to public health, education for all and provided rights for women," she explained. "These are new and exciting developments in Afghanistan and a return to better times in Iraq. However the work is not over and the next steps, particularly in education, are absolutely vital."

Prior to entering the world of politics Baroness Nicholson enjoyed a varied education and career, including studying at the Royal Academy of Music, working in the computing industry and being a director of Save the Children. She became vice-chairman of the Conservative Party in 1983 and four years later won the parliamentary seat of Devon West and Torridge. In 1995, after eight years as a Tory MP, she crossed the floor of the House to join the Liberal Democrats and in 1997 left Parliament, becoming Baroness Nicholson of Winterbourne. In 1999 she was elected to the European Parliament representing the South East of England. This heralded a time of intense involvement in international politics which has seen her play a significant role in European missions to such diverse countries as Yemen, Pakistan, Kosovo and Armenia.

During a period when questions over the country's current and future role in Europe are proving so politically contentious, the Baroness is a keen advocate of Britain remaining firmly involved. "I was glad to use my position in the European Parliament to enhance the lives of others," she said. "The end of the Cold War was a life-changing opportunity for Russia's former states and I welcomed the broader foreign policy perspective offered by 27 nations - some in the EU and others wanting to be - working together."

The Baroness's website details an impressive roll of honours and political projects as well some forays in to the arts including her role as vice-president of the Booker Prize Foundation and as a vocal champion of talented writers in Africa and Russia. Many people might be surprised however, that two key aspects of her life do not even merit a mention - her profound deafness, which began at the age of 16, and her sight problems. "Nature's not a perfectionist - it's not something that's particularly important to me," she said. "Sometimes friends have to save me from misunderstandings which might occur when I'm asked a question by someone who doesn't realise, but that's what friends are for. About one-fifth of the population need sight correction and a similar number have loss of hearing so in fact I'm in a very big minority."

Baroness Nicholson said that though her deafness didn't represent an issue for her she was committed to tackling disability discrimination. "Sadly I see it everywhere," she said. "In the casual and scornful laughter at a distant airport when an amputee lost his crutch on the moving baggage reclaim conveyor belt and it was taken rapidly beyond his reach. What was so funny?"

Kingston was one of the first universities to be involved with the Iraq Britain Business Council set up by Baroness Nicholson and it was here that Professor Lesley-Jane Eales-Reynolds, pro vice-chancellor for education at Kingston University, first met her. "She has a way of helping people find common ground and getting them to listen and to talk to each other," Professor Eales-Reynolds said. "Her ability to speak with conviction, to convince others through debate and argument and to bring people together to find solutions to what might seem insurmountable obstacles, is remarkable. These principles match those of Kingston University which is why I was so keen for us to recognise the Baroness's achievements."

For her part, Baroness Nicholson said she truly appreciated the honour and was looking forward to doing more in conjunction with the University. "I hope I can use my experience for the benefit of Kingston students to share and debate with them on topics of common interest and to help them with their future development," she added. "I also want them to come to Westminster to be part of the political process. It's a lot more fun than it looks from the outside and much more friendly too." 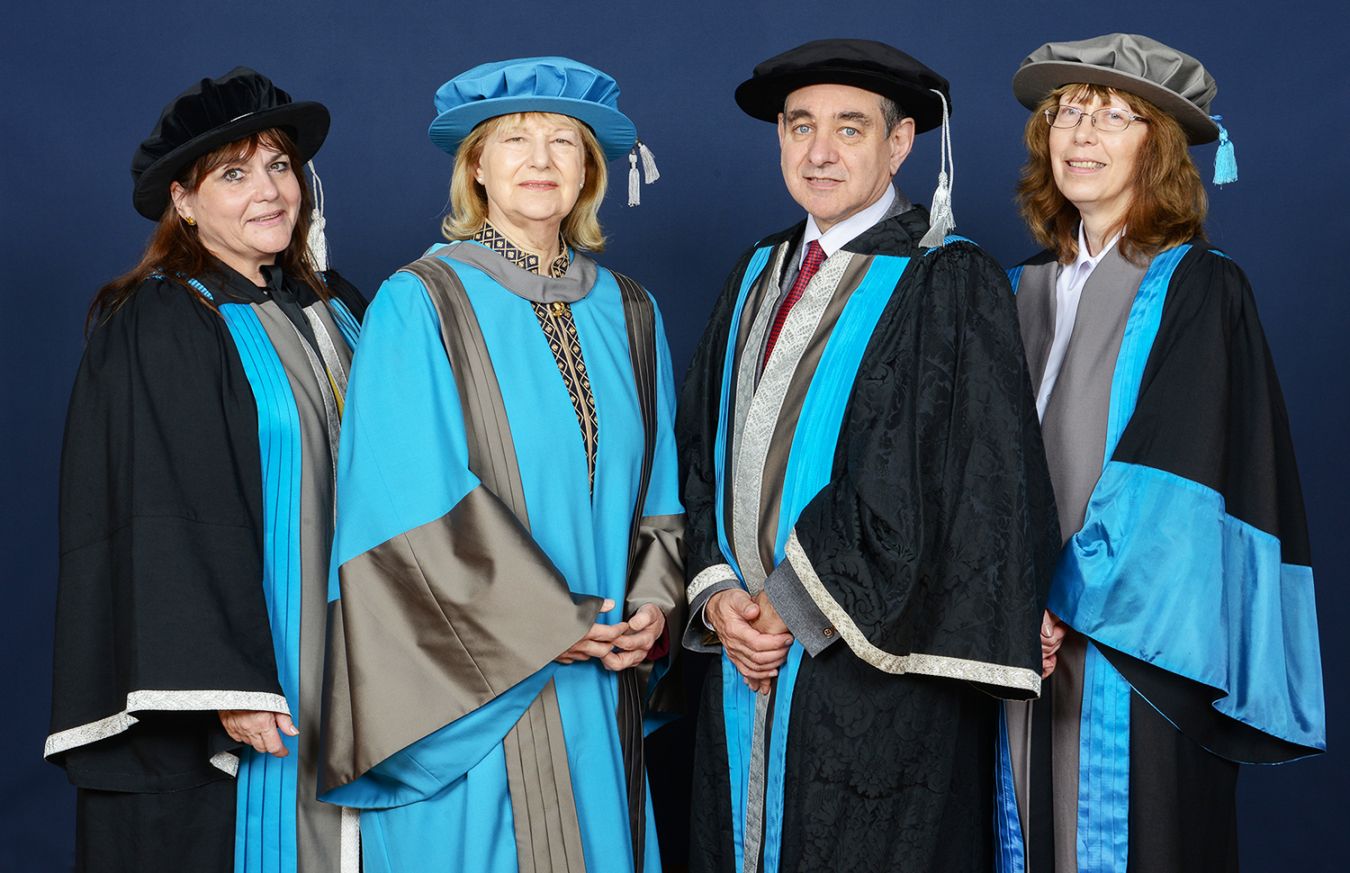