A knitwear tribute to an inspirational Nan 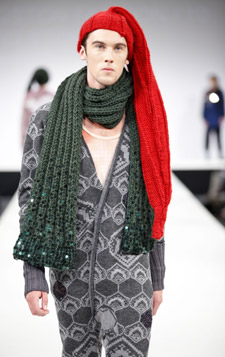 Normally it's Nans who do the knitting, but a Kingston University fashion student has turned the age-old tradition on its head by dedicating his latest knitwear collection to his much-loved grandma.

David Stoneman-Merret's late Nan Nancy Holton was his biggest fan. She delighted in her grandson's creative exploits, even going along with him to all the university open days when he was trying to narrow down where to pursue his dream of studying a fashion. Now in his final year at Kingston University in London, the 22 year old from Sittingbourne in Kent said he could not think of a better way to celebrate his Nan than in his latest work.

David's colourful men's knitwear range was inspired by the respect and admiration he felt for Nancy, and the rest of the older generation. For one of his most spectacular pieces he enlarged a favourite family photo of Nancy wearing a Christmas party hat, and used it to form the centrepiece on an over-sized jumper. "Nan would find the idea of being the face of my collection hilarious," David said. "She would have loved the attention - she'd be telling everyone 'That's me on that top!'." 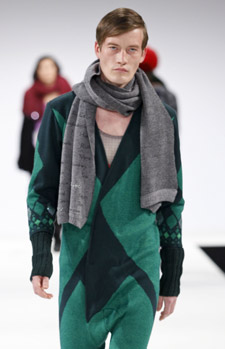 The young designer has also used digitised photos of wallpaper and cushions from his Nan's house to create striking patterns for some of the knitted garments in his winter range. Nancy passed away two years ago, aged 84. The styling of David's outfits was inspired by the later period in her life, when she was suffering from dementia. Visiting her in a care home, he met other residents living with the condition. Their tendencies to mix day and nightwear, and create outfits from different shades of the same colour, had a strong influence on his work.

David's collection owes much to his close knit family. Not only is Nan the inspiration behind his menswear, his mum Christine and aunt Linda have been putting their own knitting skills to the test by making accessories to accompany the outfits ahead of its launch during Graduate Fashion Week. "My family loves the idea that my work is inspired by Nan," David said. "They think she would be really proud."

David's flair for knitwear was spotted last year when he beat competition from 56 other fashion students to win an internship at Banana Republic's headquarters in New York. While in the Big Apple he used his spare time to start researching his latest work. "I took photos of the weird and wonderful outfits I saw older people wearing while I was walking around New York," he said. "I saw an elderly lady in the Museum of Modern Art wearing what looked like a nightdress, thick socks and trainers - that inspired me to play around with day and night wear, blurring the boundaries in garments like my all-in-ones and my nightcap shaped hats." 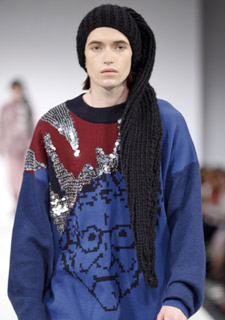 The eight looks in David's collection are each themed around a different colour. Patterned all-in-ones reminiscent of sleep suits, jumpers and handmade socks are coupled with chunky knit scarves and hats in red, green and black. Senior lecturer in knitwear Sam Elliot said David was brave to do entire outfits in one colour. "It's such a statement, there's not a lot of room for error," she said. "But David is one of the most organised students I've ever worked with, he even builds in time for mistakes, so I was confident he'd pull it off." Ms Elliot said that there was a great sense of humour in David's collection. "You can see the affection for his Nan, but his garments are also sophisticated and involve intricate patterns," she added.

David is one of many Kingston fashion students who showcased their work at Graduate Fashion Week. 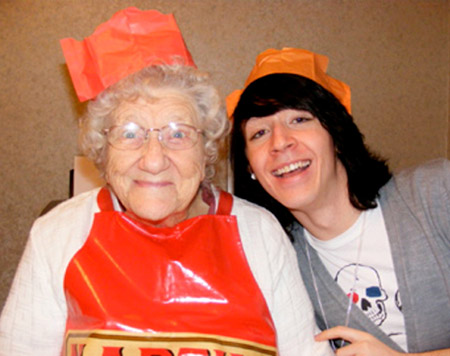