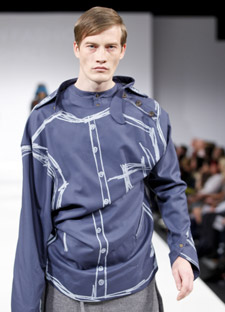 A young designer from Kingston University has turned an imagined Armageddon into the inspiration for his latest menswear collection. Influenced by ideas of evolution and discovery, Zac Marshall wanted to explore how a new race emerging in a post-apocalyptic world might go about creating clothing using only archaeological finds.

"My inspiration comes from the process of making clothes," Zac explained. "I imagined a situation where a new race evolves and tries to re-create clothing using old photos and remnants from the past. But in my head, these child-like creatures have no idea how to make garments, so often get things wrong."

The 21 year old from Huddersfield wanted to look at how clothing could distort and develop, so he adopted an unusual approach to pattern cutting. "I tried to imagine all I had to rely on was old images, so rather than using just traditional patterns I incorporated some experimental techniques," he said. "I find it fascinating to see how changing one panel of a garment - getting it 'wrong', even just slightly - alters the whole effect." 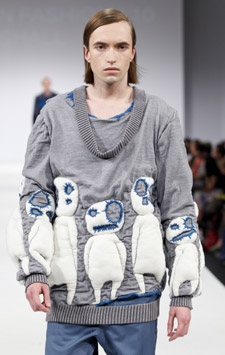 Zac's collection is the culmination of three years' study at Kingston's prestigious Fashion Department. He has experimented with both wool and woven fabrics, but said he particularly enjoyed working on the knitwear in his menswear range. His jumpers are made from Cashwool, a soft yarn made from merino sheep. Lightly padded circular patterns on the front of the garments are a key feature, forming what Zac describes as abstract faces. "I love the craft of knitting," he explained. "I think working with wool offers huge potential for creativity as you make your own fabric, rather than cutting it from a ready-woven textile. I wanted to create the look and feel of clothes that had been made by hand so, although my jumpers have been made on a knitting machine, key elements have been hand-stitched."

He admits it was tough to settle on a colour scheme for his menswear range in the early stages. "Initially I chose to mix blue and white striped shirts with orange ones," he said. "The colours worked on paper, but in reality they were a disaster."  He stripped the palette back and used tones of blue and grey - cerulean, turquoise and gunmetal as well as some eggshell blues and greens. "The colours are quite sombre, but they allow shapes and patterns to stand out," he said. 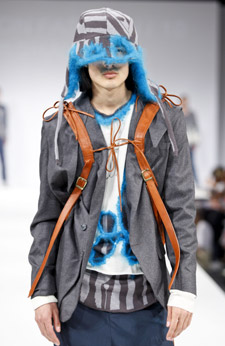 Zac has already been recognised as one of the best of the next generation of young designers. Last year he won an internship at the New York headquarters of leading menswear label Brook's Brothers - one of the most established men's clothing companies in America. The experience made a lasting impression on him and he has drawn on the simple style and elegance of the label's tailored garments for his new collection.

Zac says he is not too concerned with responding to trends or producing for consumers. He hopes that people will like his clothes, but is not afraid to do things differently. This fearless approach seems to work - he recently discovered that he has secured a highly sought-after place at the Royal College of Art to study fashion at postgraduate level, where he will be specialising in menswear.

Senior lecturer Sam Elliott said Zac had focused very strongly on the development work for his latest collection, and produced some very sensitive pieces. "Zac's a great illustrator and he's been really successful at translating that quality into his knitwear," Ms Elliot said. "There's a lot of expression in his work; the garments are closely linked to his drawings, which are very personal to him. His pieces remind me of Vivienne Westwood, with lots of twisted and draped shapes."

Zac's collection was unveiled during Graduate Fashion Week alongside the latest work by his fellow third year students from Kingston University.