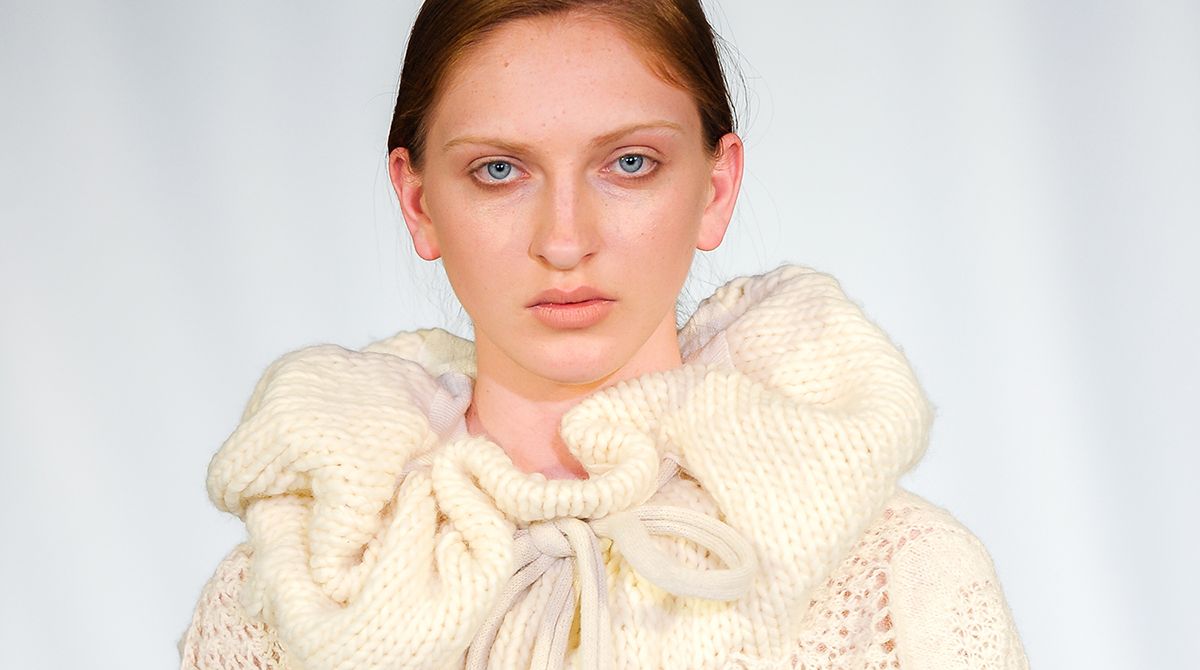 The Women's Institute has joined forces with leading fashion educator Kingston University London to weave together a century of knitting know-how with the vision of some of fashion's future trail blazers. Twenty one members of the WI, all keen knitters or crafters, cast off the organisation's more conventional image to work with 11 up-and-coming designers from the University's fashion department in a cutting edge collaboration unveiled in a catwalk show at the Royal Albert Hall as part of the voluntary organisation's centenary celebrations.

The project was the brainchild of Kingston University knitwear specialist Associate Professor Samantha Elliott and the National Federation of Women's Institutes' Craft Council. "I have long been an admirer of the Women's Institute and Kingston University's fashion department has a strong tradition of collaborative working," Ms Elliott said. "So when I met the institution's craft adviser at industry showcase the Knitting and Stitching Show, I seized the opportunity to talk about how we could bring the two organisations together. It made perfect sense to me to blend the craft skills and heritage of the WI with the design expertise and cutting edge technology we have at Kingston University." 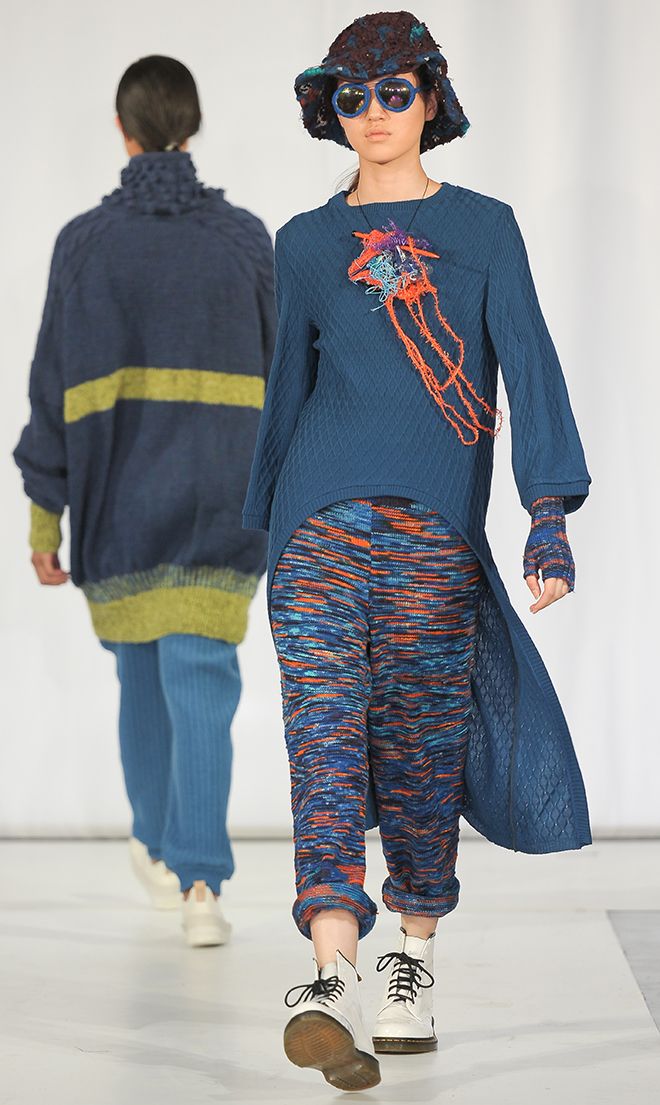 The young designers and their Women's Institute volunteers created an eclectic range of eye-catching knitwear which included sophisticated sportswear and an androgynous trouser suit and jumper. Institute members with craft experience were invited to volunteer for the project through the organisation's magazine and website. Ms Elliot matched the 21 women chosen with the cream of Kingston University's final year knitwear students - with two WI ‘makers' assigned to each student. The teams first met at the institute's craft headquarters Denman College in Oxfordshire last September to learn a little about each other's experience and expertise. A former Vogue knitwear designer, 87 year-old Shelagh Hollingworth from Powys and Radnor Federation, and wool mill owner Karen Griffiths from Derbyshire Federation, an expert in processing specialist fleece such as Alpaca, were among the members who took part in the project.

"I think the students were really surprised by the skill of our members," craft adviser for the National Federation of Women's Institutes Clare Spender said. "The members were equally impressed by how quickly the fashion students were able come up with possible designs - sometimes sketching out initial ideas right in front of their eyes," Ms Spender said.

Each student presented concepts to their Women's Institute partners at Kingston University last October. Over the next few months the teams teased these visions in to life - the Women's Institute ladies beavering away at home, keeping in regular contact with their young designers to discuss knit samples, wool, accessories and much more. Once the makers had completed their handiwork, it was over to the undergraduates to pull together the final garments. 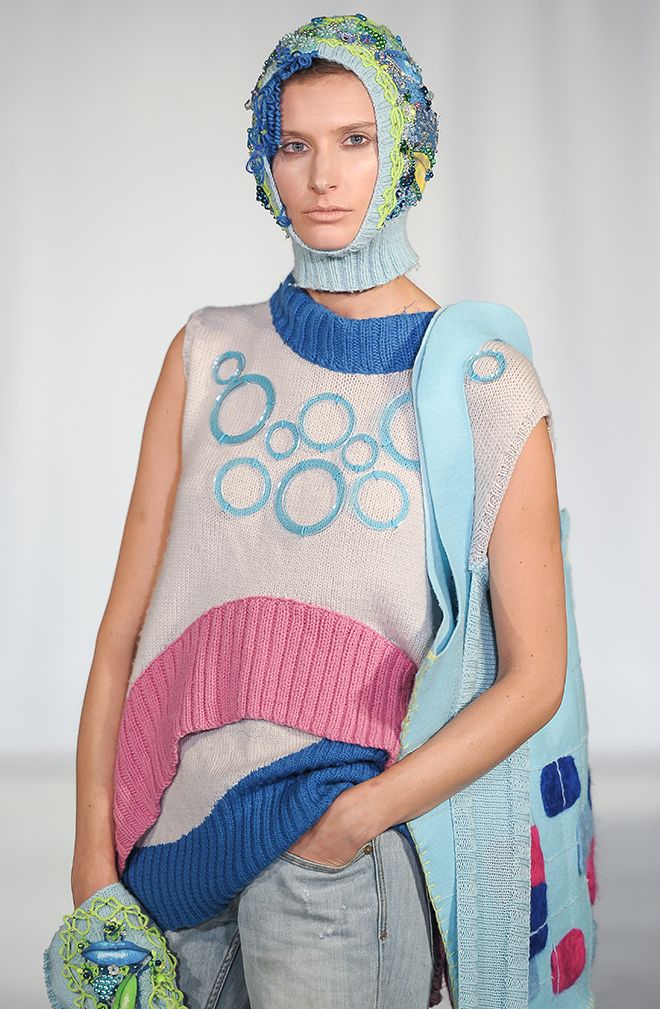 BA(Hons) Fashion student Pippa Harries worked with Women's Institute volunteer Rosie Holland to create intricately embroidered accessories for her outfit. Kingston University fashion student Pippa Harries worked with Rosie Holland from Glamorgan Federation and Lottie Beard from Berkshire Federation. "I was really keen to represent and celebrate the Women's Institute, but make the garments very contemporary," 22 year old Pippa from Kendal in the Lake District explained. Pippa's outfit featured a knitted, layered, sleeveless top. It was accessorised with a hat and oven-glove-like mittens, heavily embellished by Mary Rose Holland. The gloves featured lip motifs to represent the voices of the WI during the past century as well as stitched maple leaves inspired by the organisation's Canadian roots. "It's been a fascinating experience - the ladies I worked with had lots of input into the final garments and I've learnt so much about craft and technique through working with them," Pippa said.

Makers had their first glimpse of the finished outfits at an exclusive preview show for the Surrey branch of the Women's Institute at Kingston University's fashion studio. From a grey, cable knit, figure-hugging top, complete with attached balaclava, to an over-sized cream jumper featuring a huge Yorkshire rose, teamed with matching knee socks, there was not a twin set in sight among the outfits on the catwalk. As the show came to an end, each of the designers made a bee line for their makers and swept them up onto the runway to share the plaudits.

After some last minute tweaks, the whir of sewing machines finally went quiet and the garments were whisked away to the Royal Albert Hall for the climax of the collaboration. The 11 looks were showcased to more than 5,000 members of the institute at their Centenary Annual Meeting. Each of the 11 ladies who had taken part were there to hear the rapturous reception their garments received as models sashayed towards the centre of the hall and paraded in front of the panel of invited speakers.

Ms Elliott said the final outfits, a fusion of craft skills with the contemporary, slick finish for which the Kingston University fashion brand is known, were a fitting testament to the success of the project. "I also loved the human aspect of this partnership. We have proved that the language of design can cross generations," she said. "Some really fantastic work has been created, but, even more importantly, the students have developed so many life skills and gained so much confidence."

The finished garments will next be on display at the Knitting and Stitching Show 2015 at London's Olympia followed by a stint at the In the Loop conference in Glasgow. They will then kept in the NFWI archive collection at Denman College.