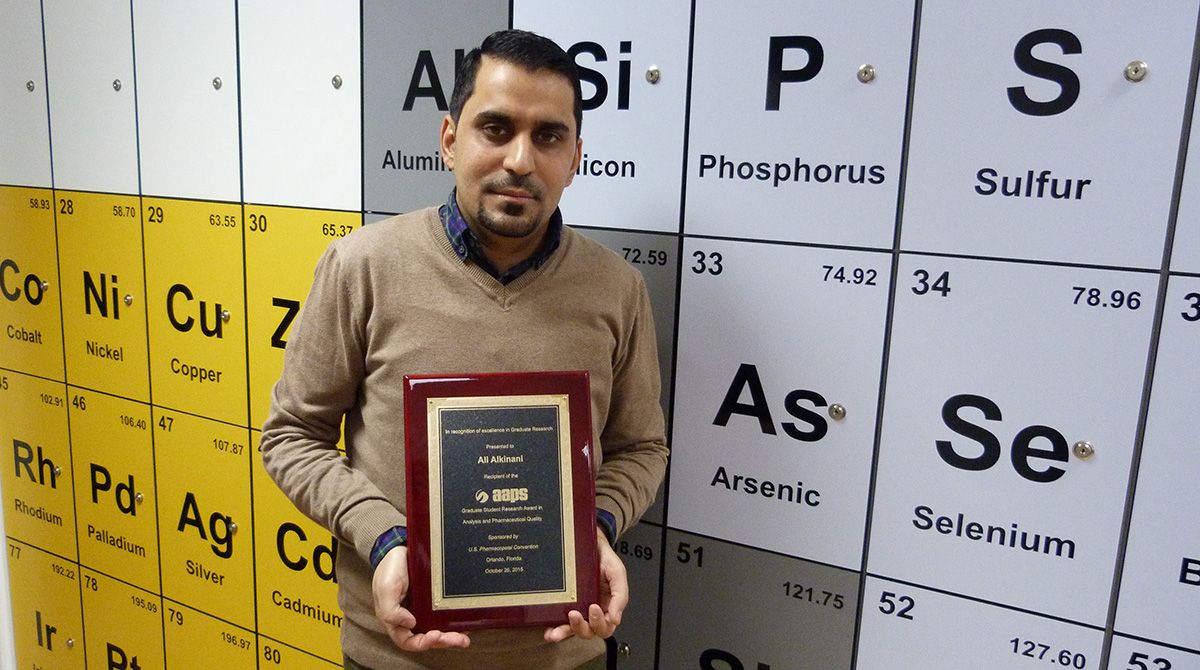 Ali Al-kinani, a final-year PhD student at the School of Life Sciences, Pharmacy and Chemistry, has received international recognition for his research from the American Association of Pharmaceutical Scientists (APPS).

APPS is regarded as the international leading body in the field of pharmaceutical sciences and their annual meeting and exposition, which includes the awards ceremony, hosts around 10,000 attendees from across the globe. Hundreds of people apply for each award, and a team of specialists and researchers hand-pick each winner. From 150 awards presented this year, only two went to UK universities. 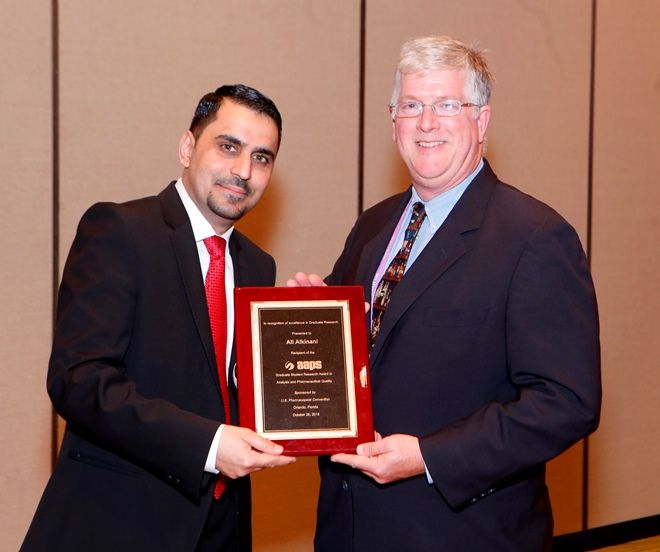 Ali found out that he had won a couple of weeks before the conference, but wasn't allowed to tell anyone. "I was over the moon," he said. "It's so great to be recognised at this level for your research hard work. At the conference they announce your name and institution and I felt very proud to see my name and Kingston University up on the big screen in front of thousands of conference attendees from across the world."

Ali won the Graduate Student Research Award in Analysis and Pharmaceutical Quality for his research titled: Antioxidant activity and real-time imaging of HPMC-coated cerium oxide nanoparticles: promising therapeutic strategy for age-related cataract. This makes up one chapter of his PhD thesis researching the prevention and possible cure for cataracts without the need for surgery. "Age-related cataract is more prevalent nearer the equator as there are higher levels of UV exposure there, but many of these areas are in developing nations where most people don't have access to safe surgery, or surgery at all," Ali said.

"My research aims to create eye drops that can be given to people in these high-risk areas that actually prevent cataracts from forming, or slow the progression if they have started. That would take away the need for surgery and prevent blindness in people from these areas." 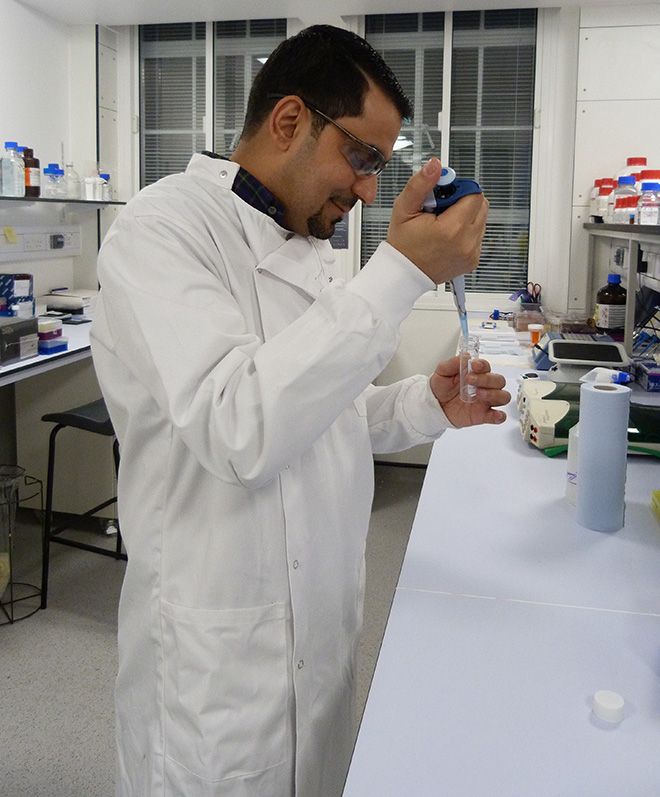 After a few years working as a pharmacist in his native country Iraq and also Qatar, Ali started a masters degree in Pharmaceutical Analysis at Kingston University in 2009. Graduating with a distinction and at the top of his cohort, he was offered PhD scholarships by two other universities as well as Kingston University. "Some other universities may sound more prestigious, but I chose to stay on at Kingston University because I have had a fantastic experience during my MSc and really felt like I could progress here," he said. "The varied skills that I have learnt here mean that I can continue to research ocular diseases amongst other. My Kingston University education has given me that flexibility. I've also had a lot of encouragement and support from faculty members and the Doctoral School, who also help fund attending conferences."

Professor Andy Augousti, Director of Doctoral School in the Faculty said: "This award for Ali, which is the latest in a long series of prizes and awards, reflects the recognition that both he and his supervisory team have earned (Professors Alany, Naughton and Pierscionek and Doctors Calabrese and Vangala). Ali has been an exemplary research student, a superb ambassador for Kingston University, and has also made enormous positive contributions to the research community and culture within the Faculty and the University. We are all delighted that the support and training that Ali has received from the Faculty's Doctoral School, such as conference bursaries, for example, has led to such important external recognition."

Professor Raid Alany is Ali's PhD supervisor and said: "I am very proud of Ali's achievements. This is a very important and prestigious award and for Ali to win it puts both him and research at Kingston University firmly on the map. Ali is in a league of his own as a PhD student and works hard for his achievements. He has a sharp vision and attention to detail and I see him only succeeding further." 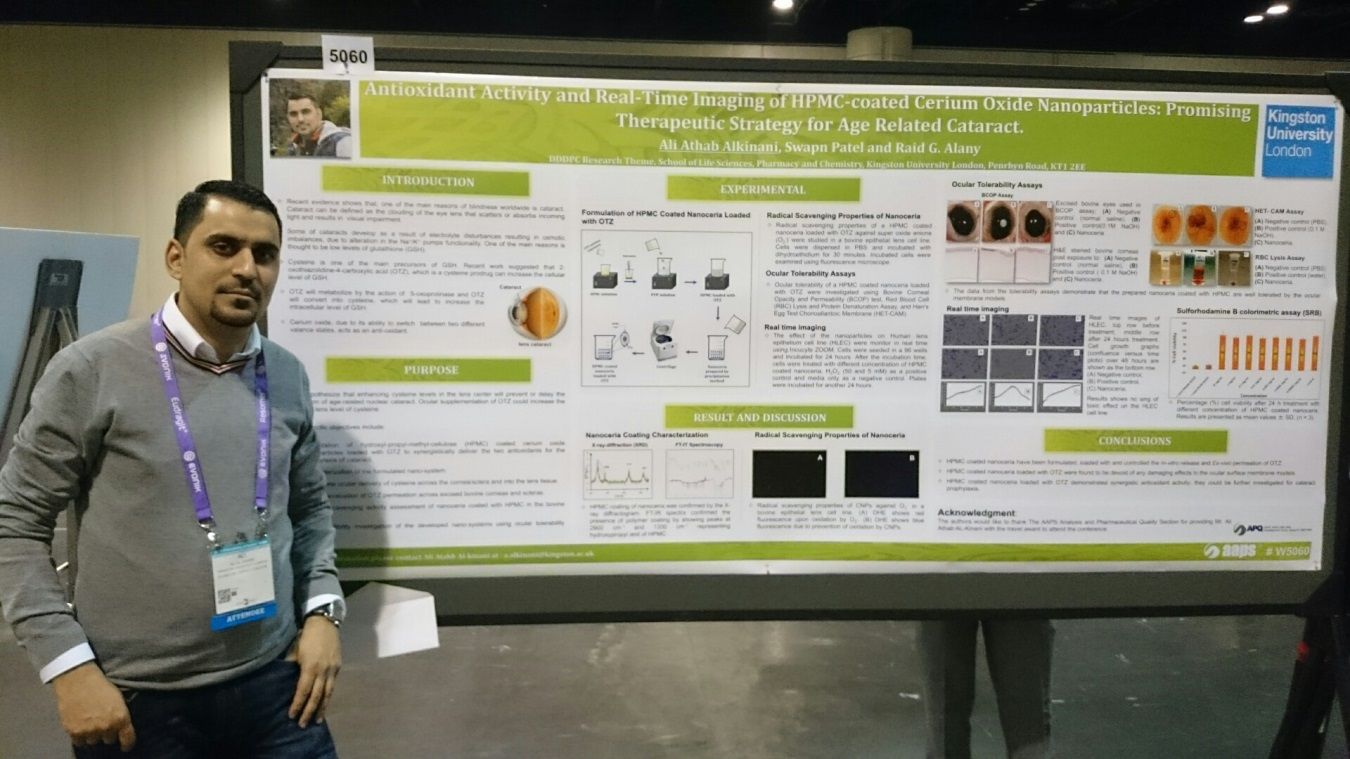