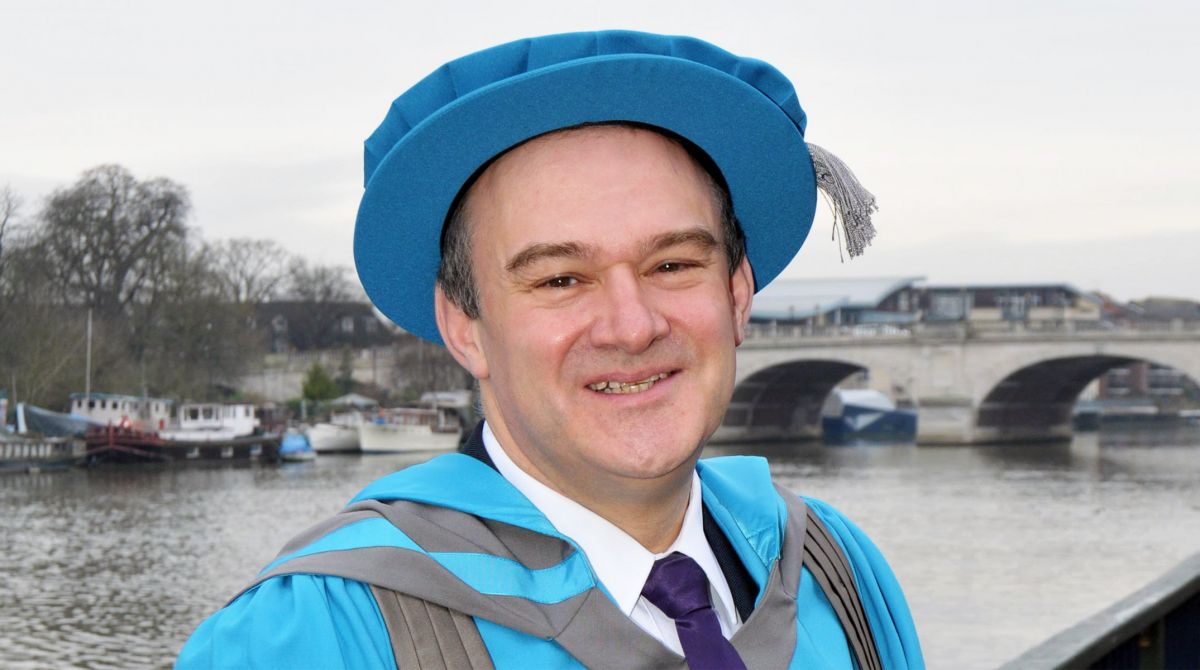 The fundamental role universities play in society is too often undervalued, according to former Kingston and Surbiton MP Sir Ed Davey. Speaking as he was named an Honorary Doctor of Science by Kingston University, the long-serving Liberal Democrat politician said the wealth of teaching expertise, research and entrepreneurial innovation that took place in higher education institutions across the country was the very cornerstone of a vibrant national economy.

"Whether it's a team of students and academics building electric motorbikes at Kingston University or some of the amazing advances at other universities and colleges, the importance of those sorts of individual projects - as well as others that are the amalgamation of years of research with different strands of thought and learning coming together - cannot be under-estimated," he said.

Sir Ed was presented with his honorary degree during a graduation ceremony at the borough's Rose Theatre in recognition of his contributions to the national energy debate and the local area. Addressing graduates from the Faculty of Science, Engineering and Computing after receiving his award, Sir Ed urged them not to lose sight of the importance of the roles they would continue to play as they went on to launch their careers. "The work that scientists, engineers, innovators and entrepreneurs do to improve our world is only possible because of people like you sacrificing things to improve your knowledge and skills," he added. "I want to thank you for the work you have done, and will do, to contribute to that." 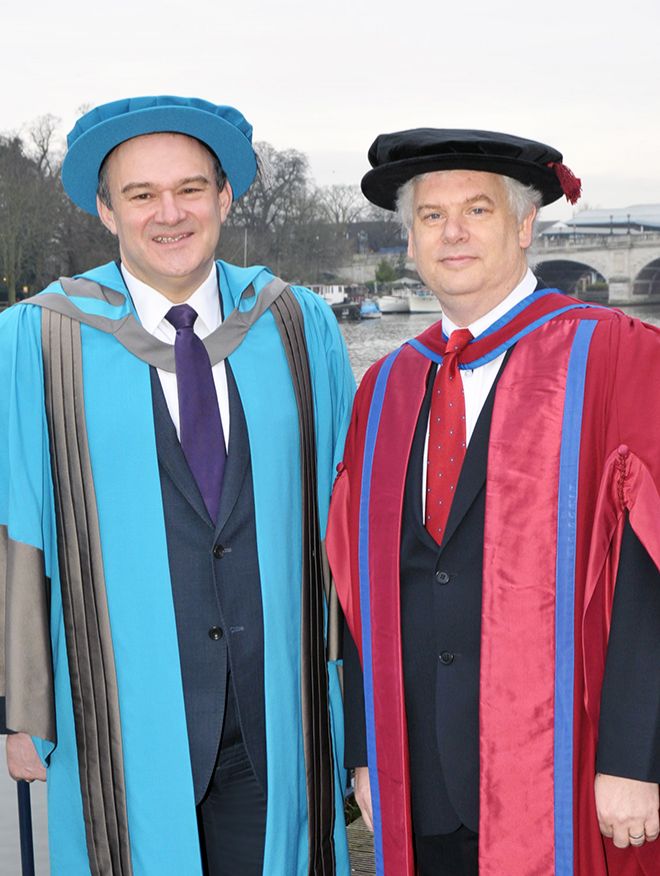 Sir Ed Davey with Professor Gavin Gillmore, Head of Energy at Kingston University.The 50-year-old father-of-two, who was knighted in the New Year's Honours list in recognition of his political and public service, also paid tribute to the people of Kingston and Surbiton who had voted four times for him to represent them. "I was always proud, as a Member of Parliament, to champion the University - and the people who work and study there - both locally and nationally, so it means an awful lot that Kingston University has decided to honour me in this way," he said.

The long-standing Liberal Democrat politician spent 18 years representing his constituency between 1997 and 2015, serving in the coalition Government between 2010 and 2015 - first as Parliamentary Under-Secretary of State for Employment Relations, Consumer and Postal Affairs and, subsequently, as Secretary of State for Energy and Climate Change.

"I love this area and could extol the virtues of the Royal Borough of Kingston, the University and the town endlessly. Quite simply, I think it's a great place and Kingston University has made a fantastic contribution to the surrounding area, enriching it through its diverse student community and the breadth of subject areas it specialises in."

Reflecting on his time as Energy and Climate Change Secretary, Sir Ed revealed he was particularly proud of overseeing an increase in the use of renewable electricity - which trebled domestically under the coalition Government - and, from an international viewpoint, his work to persuade other European Union countries to be more ambitious in tackling climate change. "That was quite a diplomatic challenge. I consider that deal to be a significant player in the Paris agreement on climate change last December, which is a fantastic thing," he said.

"To save the planet, we have to move from a fossil fuel-based economy and society to one that first uses far fewer fossil fuels, and then, eventually, none," he added. "That's a dramatic change. I think the most amazing thing for human development in the past few years is the declining cost of solar energy."

Sir Ed, who graduated from Jesus College, Oxford with a first class honours degree in philosophy, politics, and economics and gained an MSc in Economics at Birkbeck, told how he missed the cut and thrust of Westminster politics since leaving office, as well as work with borough residents that he felt allowed him to genuinely change people's lives.

The former MP has now moved back in to the private sector, forming consultancy Energy Destinations as well as taking up the role of chairman of co-operative community energy firm, Mongoose Energy, which creates, funds and runs renewable energy projects.

Kingston University's Head of Energy, Professor Gavin Gillmore, said the honorary doctorate was a fitting way to recognise Sir Ed's outstanding contribution to the national energy debate. "Sir Ed Davey made an enormous impact during his time in Government with his work on renewable energy and tackling climate change," Professor Gillmore said. "He has continued to be a key influencer in the field since moving to the private sector after being a tireless advocate for the University and the people of Kingston and Surbiton for 18 years as our MP, so it seems particularly fitting that we have been able to acknowledge him in this way." 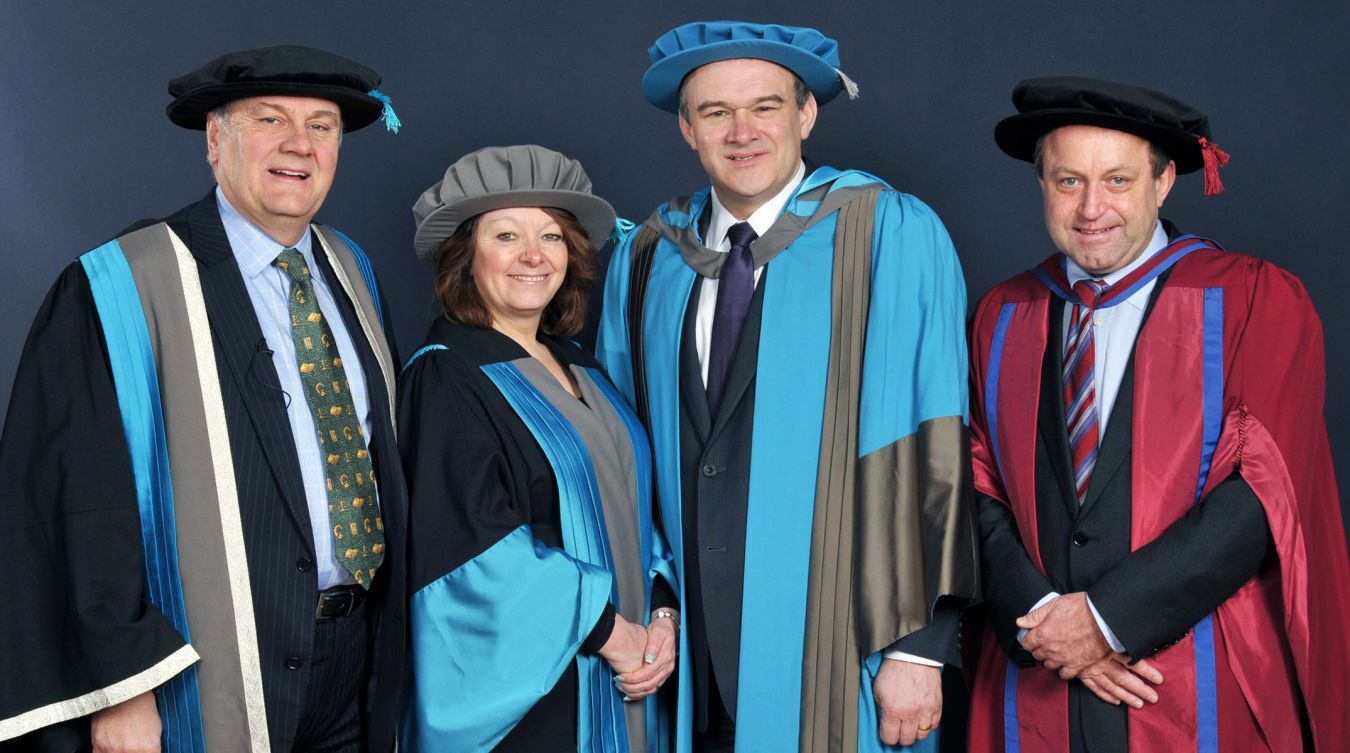