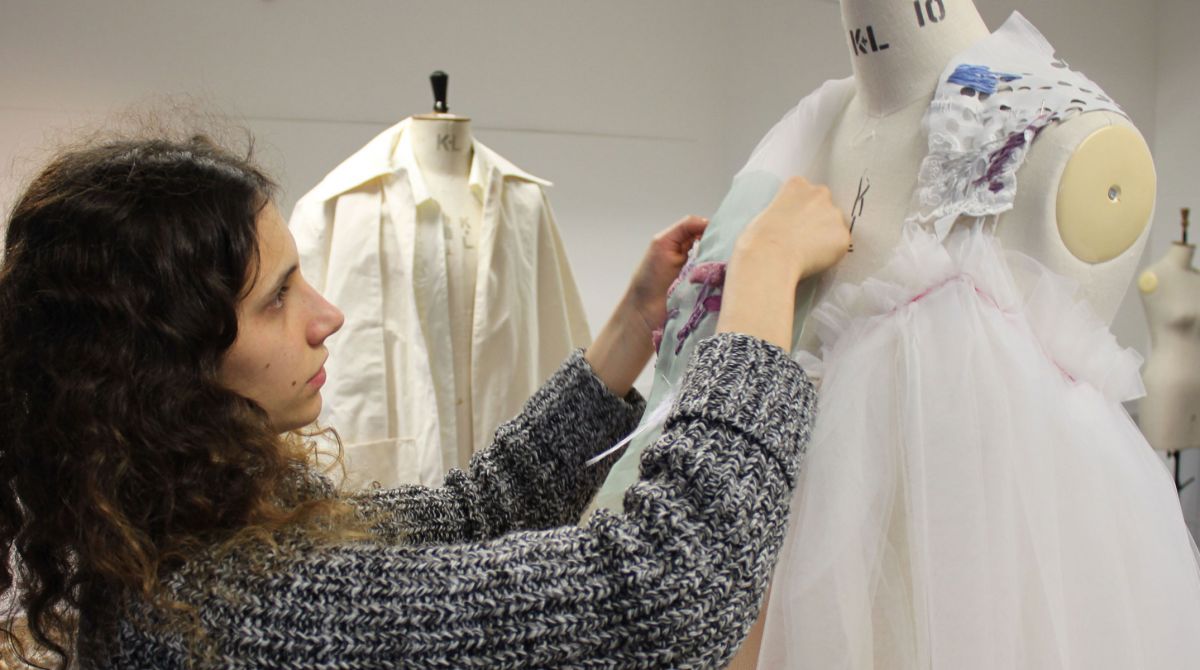 A visually impaired Kingston University fashion student who has developed a way of working based mainly on touch is using her unique approach to create a womenswear collection inspired by the way she sees the world.

Bianca Von Stempel, who is registered blind, has no central vision and can only see colours and clouded shapes with her right eye. Despite this, the 23 year old has been determined not to let her eyesight get in the way of her childhood dream of becoming a fashion designer.

The student from Twickenham uses her heightened sense of touch to decide how pieces of fabric should be put together. Almost couture-like, her technique involves mainly designing on a mannequin – placing material on to the stand then sculpting and stitching it together by hand. She uses a large sketchbook to draw detailed illustrations of her ideas as she works. "I've always drawn, but I wanted to be able to bring my illustrations to life by making them into real garments," Bianca explained. "My style is very feminine and asymmetrical – because I can't see much with my right eye I always concentrate the detail on the left side of my garments."

In her final year graduate collection, Bianca is using sheer and mottled fabrics such as organza, lace and silk chiffon in nude pink, light mint green, white and grey colours to create a blurred effect that represents how she sees the world around her.  She is also incorporating elements of braille into her womenswear. Although she learned to read and write as a teenager to help pursue her artistic dreams, she has used the tactile writing system since childhood.  In her latest work she has created a form of negative, or inverse, braille – spelling out words in her fabric by cutting holes in the material as well as embroidering braille onto the fabric. 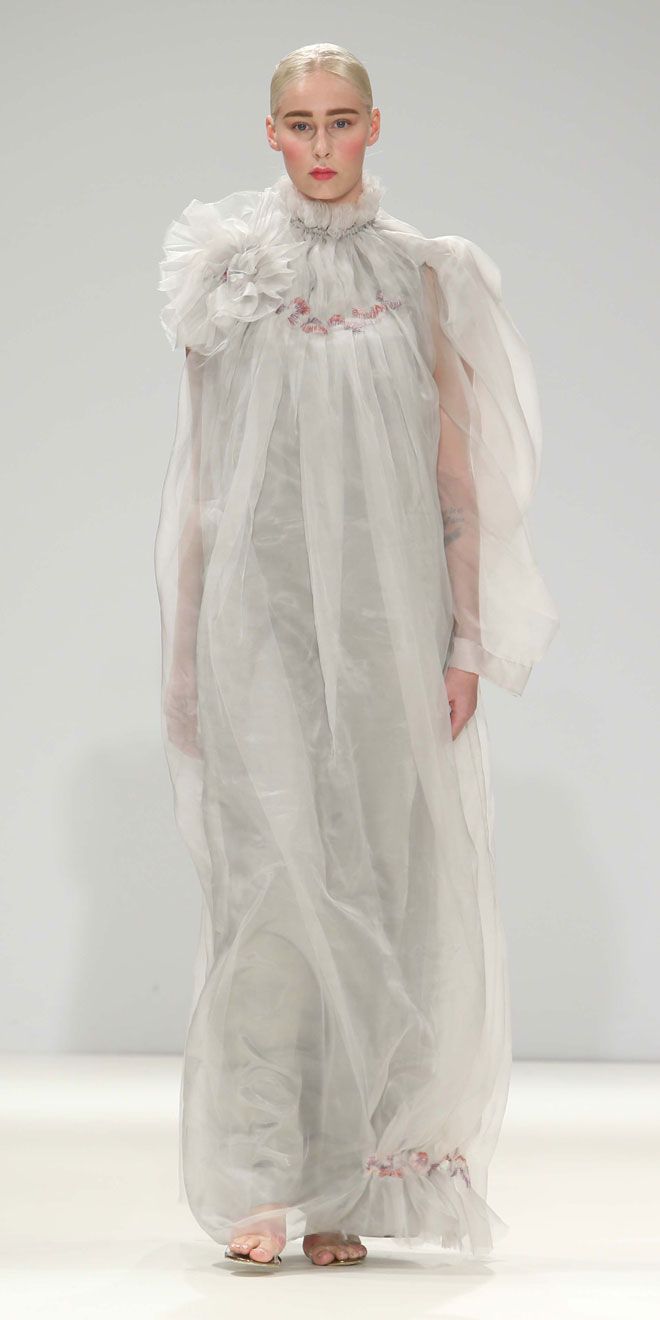 Garment created by Bianca Von Stempel for the FAD competition being modelled on the catwalk in Covent Garden during London Fashion Week."I've had holes laser-cut into nude pink-coloured coated canvas – rather than the raised bumps you would normally have with braille. The shapes becomes different letters depending on which way you turn the material, as the patterns work back to front," Bianca explained. "I wanted to explore the idea of viewing things through touch – not just with your eyes."

The third year student recently showcased some of her creations on the catwalk at London Fashion Week, after being selected as a finalist in the prestigious Fashion Awareness Design (FAD) competition. She used her own living room as inspiration for her competition collection – focusing on household items such as curtain tassels and lampshades with the aid of a magnifying glass she uses for reading and close-up work.

"The competition brief was all about slowing down and noticing things, so it was particularly interesting for me," Bianca said. "Even if you're fully sighted you go through life missing a lot – but someone who's blind or severely visually impaired misses even more."

In the Kingston University studios Bianca works closely with two technical support workers – Bonnie Gibbons and Grace White – who both graduated from the University's undergraduate fashion course last year. They help with visual tasks like pattern cutting, under Bianca's direction, as well as assisting with some of the more intricate computer design work.

"When I come across problems, Bonnie, Grace and I work out how to resolve them. To help me with sewing, I now use two threads – one cream, one bright pink so I can see it. I pull the pink one out once the garment is finished. I also use darning needles, which are long but not too sharp," Bianca explained.

Principal lecturer in fashion Andrew Ibi said working with Bianca had helped sharpen his tools as an educator. "My role has been to help empower someone who's visually impaired to take ownership of their work. This has meant deconstructing some of the design processes and coming up with solutions that work for Bianca. We've had to re-write some of the usual rules – but that's what designers have been doing for years," he said. "Bianca's an amazing hand sewer, illustrator and embroiderer – she has incredible tactile skills and is capable of really understanding clothing. She has a very pure way of working, like a sculptor, reverting back to an almost couture technique," Mr Ibi added. 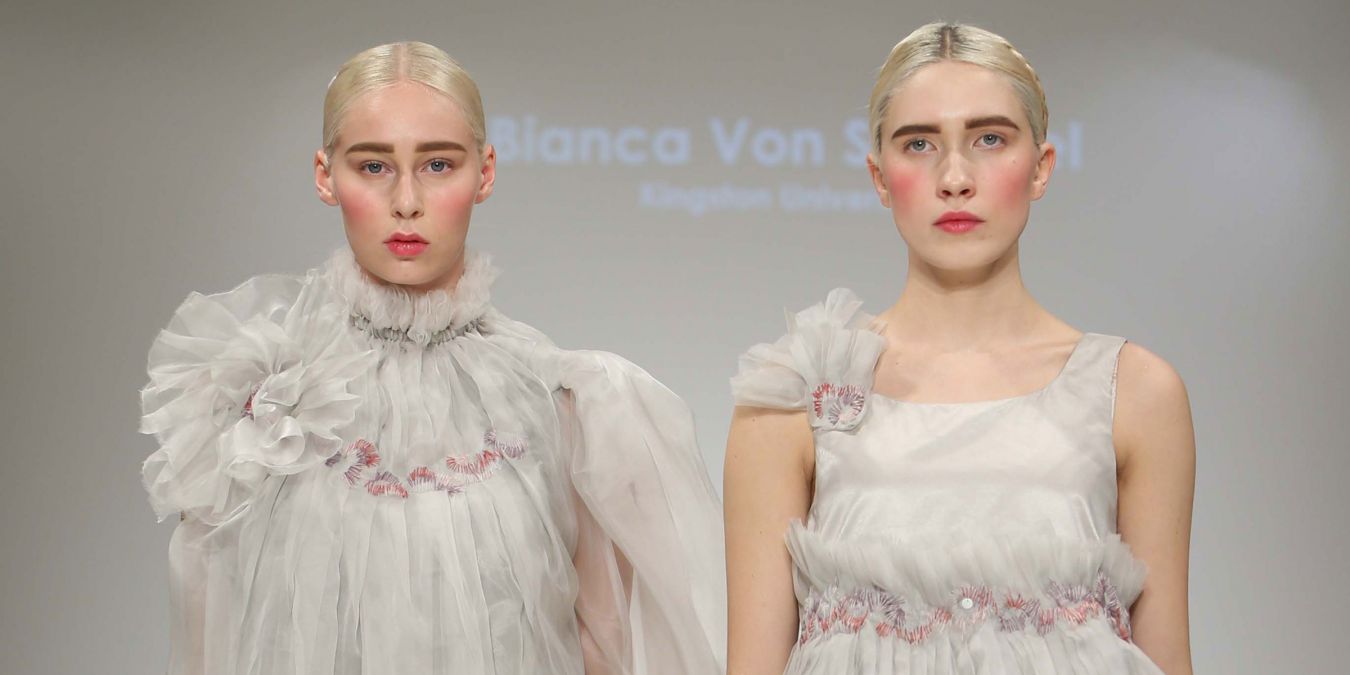