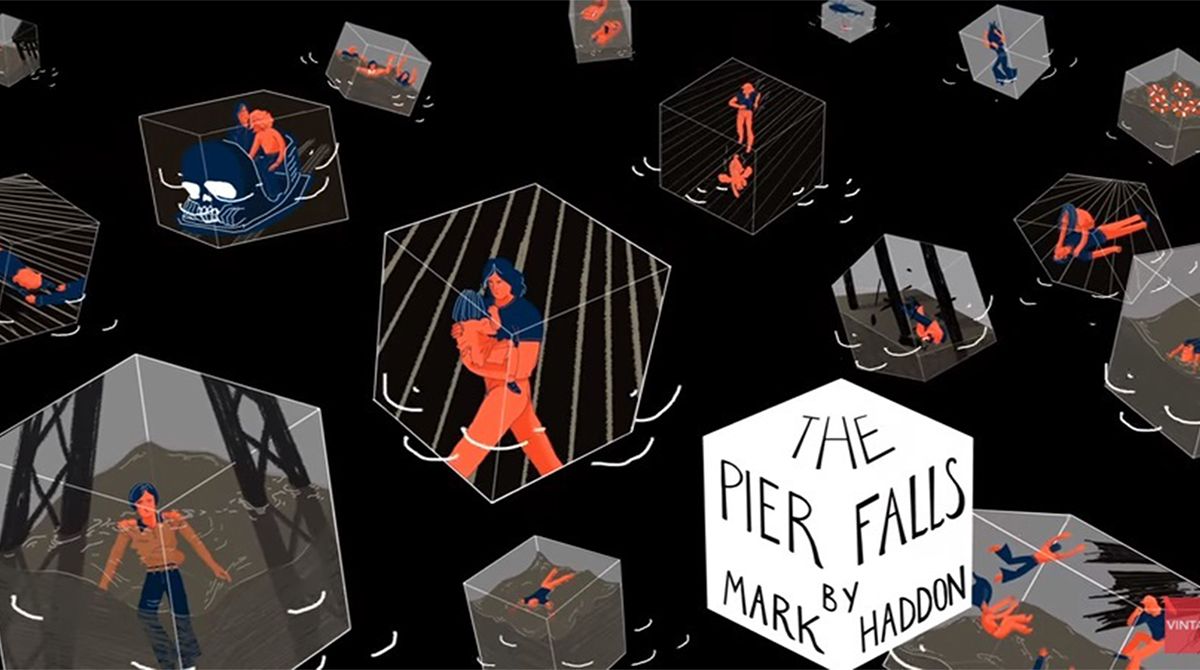 A series of short films created by BA(Hons) Illustration Animation students has brought author Mark Haddon's new collection of short stories to life, drawing high praise from the acclaimed writer in the process. The productions were created as part of the Kingston Animation Prize, an annual competition sponsored by publisher Random House's VINTAGE collection.

Each year, the challenge sees final year students grouped into teams and tasked with producing an artistic response to a literary text. This year, they explored the details of Haddon's recently released book The Pier Falls, which recounts a disaster at a British seaside resort in the 1970s. The narrator provides a minute-by-minute account of the tragedy, with a focus on immediate casualties evolving into an observation of the long-term effects on the survivors.

The winning film, titled 'Embrace', captivated the judges with brightly coloured characters falling into the sea among dull debris of the tragedy described in The Pier Falls. Students Jennifer Zheng, Alexa Broyd, Mikyung Kim and Charlie Nathan Neville worked as illustrators, animators and producers to secure the £1,000 first prize.

Miss Zheng, 22, directed the film: "We picked up on the detached tone of the narrator, as if they were surveying the scene post-mortem, and we wanted to physically show this with his hand examining the scene in cubes," she explained. "Each cube is a different narrative from the story, and we particularly focused on one of the most evocative storylines - a six-year-old boy whose parents wrap him up to protect him as they fall."

Seven entries were pitched to the judges by groups of students in studio; Mark Haddon and his publishing team selected the winners as part of the competition that also offered the chance to feature some entries in the online marketing campaign for the book's release. Kingston University final year illustration and animation students take part in a number of national and international competitions to develop their professional portfolios and to provide experience of working to a creative brief.

The competition's second prize was awarded to the ominous ‘Cross Cut', a piece that conveys the stillness of an impending catastrophe by contrasting a world above the water with foreboding scenes of what lies beneath. The animation, set to a sinister soundtrack, was put together by Charlie Dodd, Jack Faulkner, Harrison French and Joshua Wright.

Judges labelled the third prize winner, ‘a joyous celebration of drawing done by the actual human hand'. ‘O Morph' captured the trepidation of the event in a series of simple but memorable images designed by Daniella Alverez, Rosa Fisher, Claire Lewis, Fangjia Li and Isabel Muir.

The author of celebrated novel The Curious Incident of the Dog in the Night-time, which has sold over two million copies and won the Guardian Children's Fiction prize in 2003, Mr Haddon had high praise for the winning entry. "It was genuinely moving and clever, which is a rare combination in full-length films let alone a film 60 seconds long," he said. "This project was a real pleasure in every way. I'm only sad they can't make more films about other stories in the collection."