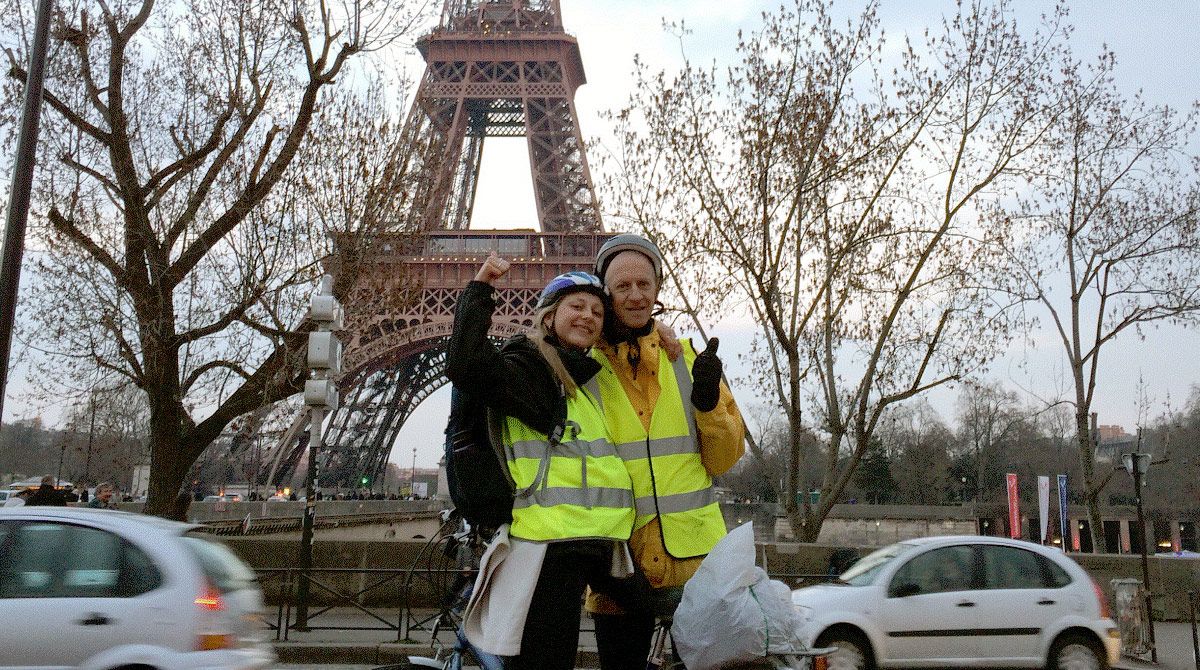 Last year Tracey Ford gave a keynote speech at Kingston University about her work on youth violence in London. In 2007 she lost her son when he was murdered at Streatham Ice Rink; his killers have never been found.

Second year Criminology undergraduate, Emilia Gill, contacted Tracey to see if she could get involved with her work at JAGS Foundation, an organisation that aims to raise awareness of youth on youth violence by providing support services and safe spaces for healing, education and restoration.

Emilia began interning for JAGS in November 2015. The organisation was not only important for her as a Criminology student because of its relevance to crime and the criminal justice system, but also because she was positively impacting on people's lives with the knowledge she has gained from university.

Emilia decided to raise funds to thank the team for the amazing opportunity they'd given her, and so decided she would cycle to Paris in three days. She didn't realise how challenging it would be...Here is a diary of her journey.

On 30 March I woke up at 6.00am and attached my rucksack to the back of my bike. Feeling extremely nervous I cycled down to Brighton Pier to meet the rest of the group. All 12 of us set off for Newhaven and were on the ferry to Dieppe by 10.00am.  We arrived in Dieppe and spent the first day cycling on a beautiful old railway line down to Bray, now a cycling path. The weather was good and we were feeling confident, until the clouds went grey and a rainstorm began. We continued to cycle and I remember losing all feeling in my toes and fingers. After another hour cycling in the rain we found shelter under a railway bridge and ate some glucose packs to re-energise.  After a short break we continued to our first stop, where we slept for the night.

I woke up after only managing to sleep for a couple of hours, mainly due to nerves. After a café au lait and croissant we set off, weary-eyed for our second day. We cycled through the beautiful rural countryside of Northern France, with lots of hills, farms and forests. The weather held up well (other than an hour or so of rain), but it was nowhere near as bad as the first day. We treated ourselves to a lovely hotel with a pool and I enjoyed a swim after my legs began cramping up. We had dinner and went to sleep, ready for another big day of cycling.

I didn't sleep again on the last night, and only managed to nod off for about three hours.  I'm normally good at sleeping so struggled with over tiredness but was nevertheless ready for the last day of cycling!  It was only 55 miles to Paris.  On our last day we encountered the hardest hills of the entire trip, with one hill taking about an hour of solid cycling to make it to the top. We were absolutely exhausted but our spirits were not dampened, and when we reached the edge of Paris and saw the Eiffel Tower for the first time it felt incredible. What an amazing sight! We arrived in Paris that evening.

Throughout the whole trip I only managed to suffer two bike punctures, and survived one of the heaviest rainstorms I've ever witnessed.

But a HUGE thank you to everyone who has donated, and for raising money for an incredible organisation.

Emilia raised £650.00 for JAGS – many congratulations on a tremendous achievement!