A drama used to help mental health nursing students put their knowledge in to practice has seen Kingston University and St George's, University of London carry off the Teaching Innovation of the Year trophy at the 2016 Student Nursing Times Awards. The annual awards, run by the leading nursing magazine, provide an opportunity to share good practice among student nurses and celebrate the achievements of those who will be shaping the future of the profession.

Judges of the innovation category were looking for a stand out idea that would help student nurses either improve their clinical skills or broaden their understanding of academic subjects. The winning Kingston and St George's project consisted of a 15-minute drama simulation. It was performed last year at the Rose Theatre as part of a wider event called Nursing's Got Talent, which celebrated International Nurses Day and featured poetry, music and drama. 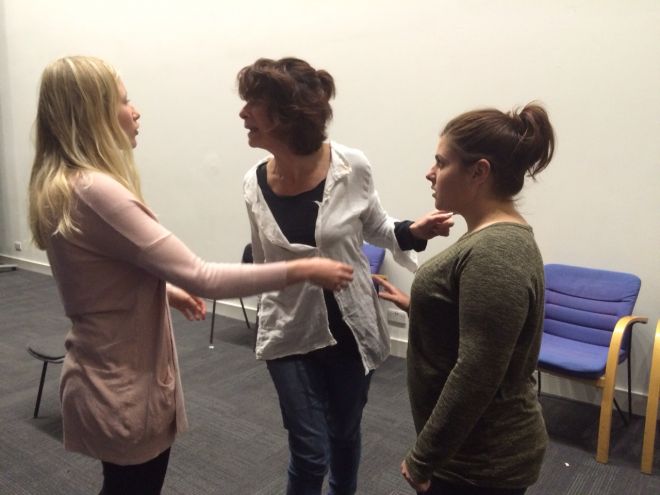 The prize-winning play had evolved through improvisation and rehearsal.
Entitled Turning Crisis into Drama, the simulation involved nursing students performing alongside professional actors who took on the roles of patients, working closely with teaching staff and students on the mental health programme. They developed their characters from an original script devised by senior lecturer in mental health Chris Hart, who also directed the drama.

The play had evolved through improvisation and rehearsal, Mr Hart explained. "Our students didn't know what situations the actors would come up with, so they had to deal with their emotions and respond to their needs in just the same way as they would in a real-life situation," he said. "This really helped to build the skills integral to mental health nursing."

The drama had focused specifically on patients being treated by nurses, which demonstrated the key work they carried out, Mr Hart added. "It also highlighted such problems as the stigma and isolation experienced by people suffering from mental health," he explained. This is the second time the mental health team from Kingston and St George's School of Nursing has won the innovation award for its simulated activity.

Mental health nurse, David Rooms – who took part in the show during his final year at Kingston University – said that the positive reaction of the audience had been extremely satisfying although performing in front of such a large theatre audience had been quite daunting. "Looking back at the day I think the Crisis to Drama show offered a unique method of communicating what modern mental health nursing is like and also dispelled some of the stigma involved in this type of health care," he added. "Hopefully this production will lead to others that will entertain people as well as raise awareness of mental health."

The 2016 Student Nursing Award winners were announced at a special lunch held at the London Hilton on Park Lane. The Kingston and St George's project was one of only 17 winners chosen from more than 750 student nurses, education providers and mentors.

The winning team has no intention of resting on its laurels. Students were back on stage at the Rose Theatre during May performing a drama called Is Not Our Life All Made Up.