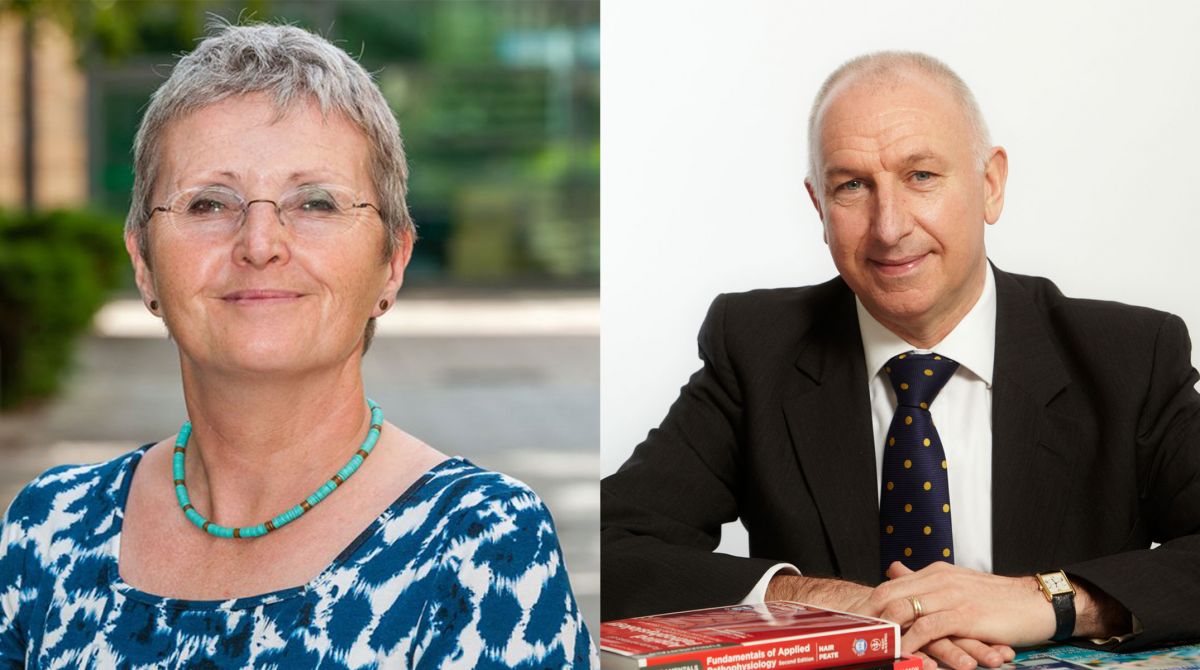 Two members of staff from the Faculty of Health, Social Care and Education, run jointly by Kingston University and St George's, University of London, have been recognised in the Queen's 90th Birthday Honours. Professor Vari Drennan, director of the Centre for Health and Social Care Research and associate dean for research, was awarded an MBE for her work in health policy research, development and nursing while Professor Ian Peate received an OBE for services to nursing and nurse education.

Professor Drennan has undertaken a wide range of research around health and social care services for older adults, changing health care roles and medicine management in community settings. Her research focuses particularly on service users who may be marginalised or isolated. She regards her work as shining a light into corners of healthcare that are often overlooked. Recent studies include an examination of the effect on carers of older people with dementia and incontinence living at home, as well as the experience of people with mental health problems who are victims of crime. Professor Drennan is now undertaking research in to the contribution made by new NHS physician associates, who support doctors in the diagnosis and management of patients in secondary care.

On hearing she had been nominated for an MBE, Professor Drennan said she was shocked but hugely moved. "This award is recognition, by peers and others who nominated me, of all the work I have been doing for the past 35 years, but it also reflects on all of the great people and teams I've collaborated with, especially at Kingston University and St George's, University of London," she said.

Professor Peate, Head of the School of Health Studies in Gibraltar, is a visiting professor in the Faculty. He began his nursing career in 1981 and has worked in nurse education since 1989. He has particular expertise in men's healthcare and improving services in this area, and has published widely on this subject. Professor Peate now works on the Gibraltar Nursing Programme, run in partnership with the Faculty.

Professor Peate said he had been taken aback to discover he had been nominated. "Having practised as an enrolled nurse and then worked my way up the ladder, this accolade is something I'm extremely proud of," he added. He also paid tribute to his colleagues, who he said shared his passion for nursing. "The profession has so many people deserving of such an award. I am proud of those people I have had the privilege to work with. It is an honour to have helped so many of them achieve great things that have had a really positive impact on patient outcomes," he said.

Faculty Dean Professor Andy Kent said the professors' recognition was a significant achievement. "We are very proud the contribution these two outstanding colleagues have made to the field of nursing has been recognised in this way," he said. "It is also particularly pleasing to see so many nurses recognised in this year's list, with more than 20 awards in total."

Professor Drennan and Professor Peate's achievements are not the only ones currently being celebrated at Kingston University. One of the University's alumni was also recognised in the Queen's 90th Birthday Honours. Shepherds Bush Housing Group chief executive Paul Doe, who achieved a Diploma in Management Studies from the University in 1992, was awarded an MBE for services to housing and voluntary service tackling homelessness.

• Find out more about the Faculty of Health, Social Care and Education at Kingston University and St George's, University of London.