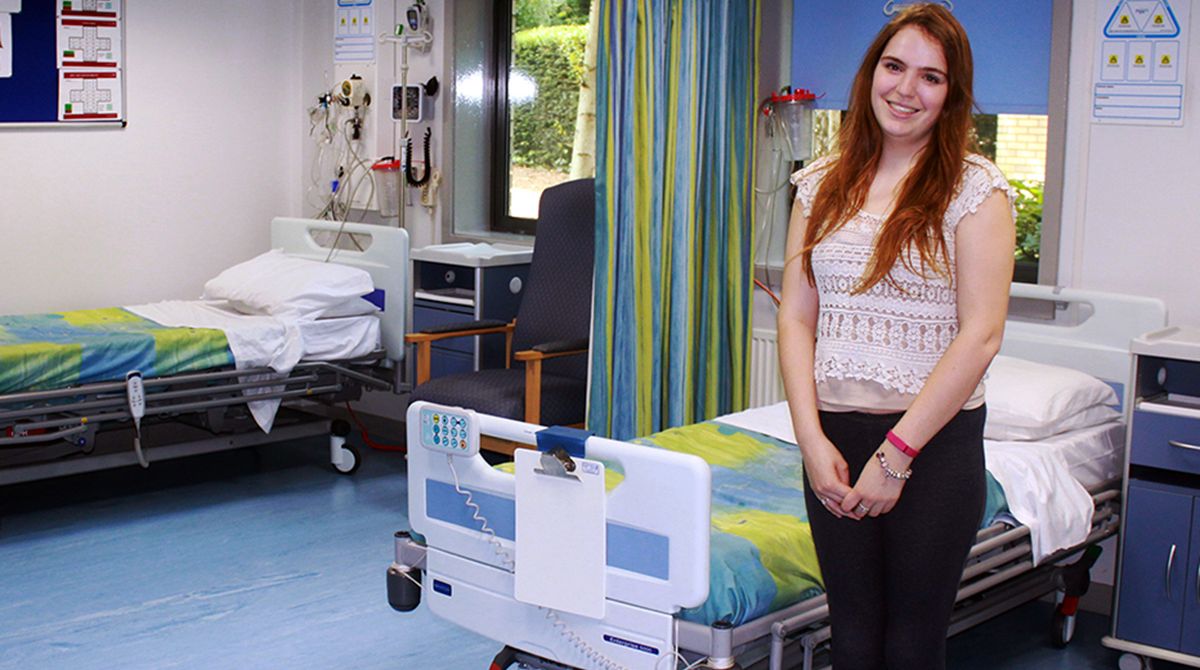 After spending years in and out of hospital for treatment for type 1 diabetes, Hollie Wilson could think of no better way of repaying the kindness shown to her by healthcare professionals than becoming a nurse herself. Her long-held ambitions hit a hiccup, however, when her A-level results revealed she had narrowly missed out on the grades she needed to take the first step towards a career on the NHS frontline.

The 19 year old still vividly recalls the moment when, on a family holiday in Tavira, Portugal, her sixth form teacher emailed her marks to her father's phone. Confronted with the news her results weren't quite what she had expected, what was supposed to have been a relaxing break suddenly took an abrupt turn. "Initially it really did feel like the end of the world," Hollie recalled. "Trying to get on to the right course is a stressful prospect to face when your emotions are running high, but I was determined to find a way I could still become a nurse."

A call to Kingston University's Clearing hotline turned out to be just the medicine needed to put her plans back on track. "When I got back to the UK, I came across information about Kingston University's Clearing hotline in the newspaper and decided there was no time to waste. I picked up the phone and, before I knew it, found myself speaking to a really friendly nursing student. It was so reassuring as she already knew exactly what the course was like and was able to give me a much better idea about campus life at Kingston University," she explained. "I then had a call back from one of the academic team from the School of Nursing who also helped set my mind at rest. She invited me to attend an interview and, from there, I was lucky enough to be offered a place on the learning disability nursing degree."

That branch of nursing had a particular pull for Hollie, who fostered her love of helping others in need while spending countless hours volunteering in services for people with learning disabilities as she completed her A-levels. Coupled with her own health issues as a diabetic, the experience gave her a first-hand insight in to the important role nurses play in patients' lives. "I remember having lots of appointments, particularly when I was younger, and met so many nurses whose caring natures made me feel so much better, no matter what I was going through," she recalled. "They really were my angels - they made me feel safe and brightened my day. I remember thinking I wanted to be like them and do the same for someone else. Nursing is the perfect profession to be able to do that, because you're often helping vulnerable people going through a difficult time."

Hollie has come a long way since her call to the Clearing hotline this time last year. She has thrown herself in to life at the University's Kingston Hill campus and describes joining the nursing society as a particular highlight. "There are lots of events to get involved in and I've met nursing students from other years as well as getting to know my lecturers better," she said. "That's really helped me settle in to the course, as well as building professional relationships with my peers and course leaders."

The challenge of moving nearly three hours away from her home town of Cheltenham, Gloucestershire to study was made easier by connecting with the course mates she now refers to as her university family. "I found the best way to deal with being away from home was to use social media to keep in contact with my family. Making new friendships at university has been so important as well - we've developed a home away from home atmosphere where we all support each other with the challenges of studying and living in a new area," she said.

Hollie urged students entering the Clearing process this year to remain calm and remember to explore all their options. "It was an anxious time but I'm so glad I made that call to Kingston University's hotline," she said. "My advice to anyone who finds themselves in a similar situation is to take their time and to use all the resources at their fingertips to find out everything they can about the universities that appeal to them. I certainly did and I haven't looked back since."